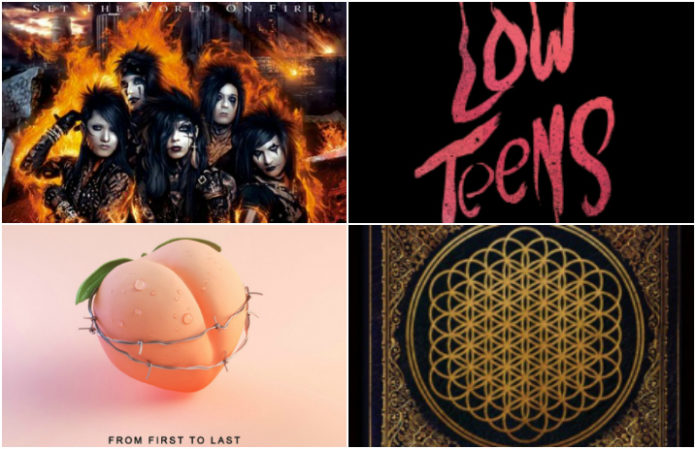 Call it an homage, a weird coincidence, or a total rip-off, but there are plenty of album covers out there that look suspiciously alike. Despite the original intentions (or lack thereof) of the bands and graphic designers themselves, people generally aren’t too happy when they see what looks like a perfect copy of another artist’s work. Some bands have actually taken to Twitter and various music outlets to confront the issue, while fans have also made their fair share of reports. These “rip-offs” occur in every genre, but here are 10 rock album look-alikes that will make you raise a brow.

Every Time I Die / Foster The People

They’re two extremely different types of bands, but who knows, maybe Foster The People listen to Every Time I Die in their spare time. ETID’s record Low Teens was released in 2016, and just one year later, Foster The People came up with almost the exact same cover artwork for their three-song EP release, III. ETID themselves pointed it out on Twitter, drawing support from their fans and other bands, including Code Orange and Harm’s Way—a group of people FTP most certainly don’t want to mess with.

Read more: Every Time I Die call out Foster The People for similar cover art

Bring Me The Horizon / Coldplay

This album cover controversy was the subject of much talk and speculation for months. Plenty of interviews with Bring Me The Horizon have addressed the similarity between their Sempiternal cover and Coldplay’s subsequent record A Head Full Of Dreams. BMTH vocalist Oli Sykes admitted that the flower of life symbol, which was the basis of each album’s artwork, was an ancient symbol and didn’t belong to any one particular band, but that Sempiternal did come first. Fuel was added to the fire when Sykes pounced on Coldplay’s table at the 2016 NME Awards and smashed it to pieces. While there was speculation he did this on purpose, he’s gone on record as saying it was just the nearest table to him during BMTH’s performance.

Both Elvis Presley and the Clash are now giant figures in rock history. While a listener might think they don’t have much at all to do with each other sonically, the Clash’s album artwork for London Calling suggests otherwise. The pink and green lettering of Elvis Presley’s self-titled 1956 album shows up in the exact same format and placement on the Clash’s landmark record decades later. The artist who designed the London Calling cover, Ray Lowry, has said that he did this not as a rip-off, but to pay genuine homage to the rock ’n’ roll icon and the beginning of rock music. However, others have speculated differently, concluding that the Clash cover is meant to put into relief the end of early rock ’n’ roll and usher in the era of punk.

The Dillinger Escape Plan / The Ghost Inside

The Dillinger Escape Plan were not exactly enthusiastic when the cover of the Ghost Inside’s 2014 record, Dear Youth, was revealed. The cover of TGI’s new record looked a lot like Dillinger’s cover for One Of Us Is The Killer, which had come out just a year before. Both covers feature a black quill with splattered ink, though the overall positioning and composition of the artwork is different. While Dillinger went on record as saying the Ghost Inside should have done their artwork differently, TGI responded to the controversy by stating they had never seen the album artwork and meant no disrespect.

This one is about much more than just an album cover. When Black Veil Brides really started to gain success, their makeup and costuming just screamed “KISS.” While many people jumped on the bandwagon and became part of the BVB army, others were put off by what they perceived as a total rip-off of a legendary rock band. An example of this would be the cover artwork of BVB’s Set The World On Fire and KISS’ The Originals II (1978). But BVB, from the very beginning, have expressed their idolization of KISS and fully admitted to wanting to be the modern-day version of the iconic band.

Read more: 10 songs that borrowed from other songs