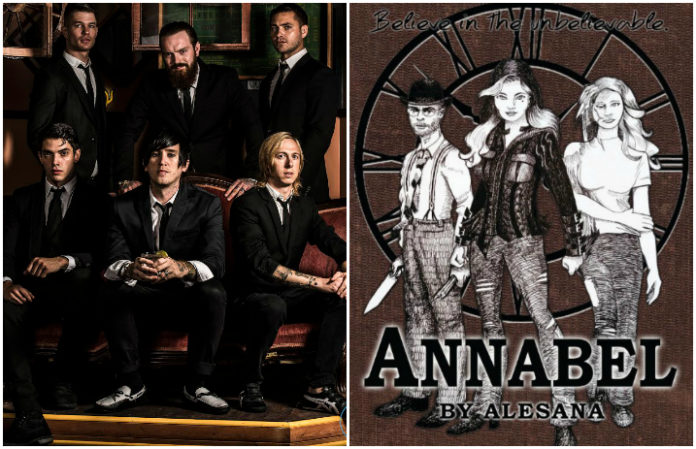 On August 31, Alesana released the newest installment of their Annabel trilogy. What began as a short story co-written by bandmates Shawn Milke and Dennis Lee and turned into three albums’ worth of intricate music composition has now been transformed even further by the two writers into a short novel simply titled Annabel. Expanding on themes all initially touched upon by the records The Emptiness (2010), A Place Where the Sun Is Silent (2011) and Confessions (2015)—such as madness, the value of artistic creativity, and even time travel—the band members have added yet another layer to their already intensely dynamic project.

Alesana are somewhat of a cult favorite in the heavy music scene, making their crowning achievement (the Annabel trilogy) a cult classic of sorts. Falling somewhere between post-hardcore, metalcore and symphonic pop, they remain the underground of the underground even after a career spanning over a decade. And yet, this project has spanned multiple types of media and has referenced works globally and throughout the centuries, from Dante to Edgar Allan Poe to Madeleine L’Engle. In reality, this cult masterwork is as universal as it is specific.

Though there are moments of the short novel—as well as the records—that have flaws (some parts are too rudimentary while others are too complex), the strength in Alesana’s epic storytelling is in its postmodern, multimedia approach. When you read certain phrases of the new book, your ear is recalled to the song that shares the same lyric, making for a multi-sensory experience. Include the music videos/short films that accompany songs like “The Thespian” and the two-part “Comedy of Errors,” and you have an auditory, visual and written creation that is a reminder that great art is about setting up this kind of intertextuality that stimulates the imagination and creates conversations. Alesana don’t stop with one avenue of storytelling; they make music sound out in a variety of ways, even when there are only words on a page.

This is what it is to be artists in the contemporary world. With so much already achieved by artists past and so many kinds of media currently available, the only true way to achieve effective storytelling is to take every possible approach. Very much like Mark Z. Danielewski’s sensational bestseller House Of Leaves incorporates ancient mythology, epic poetry and even sheet music to tell stories within stories, Alesana accomplishes something tremendously similar with Annabel. It’s this complex weaving of methods and tales that mark our modern age. So if you haven’t dared enter the labyrinth yet, do so immediately, and do so with a ball of string.*

*See the myth of Theseus and the Minotaur