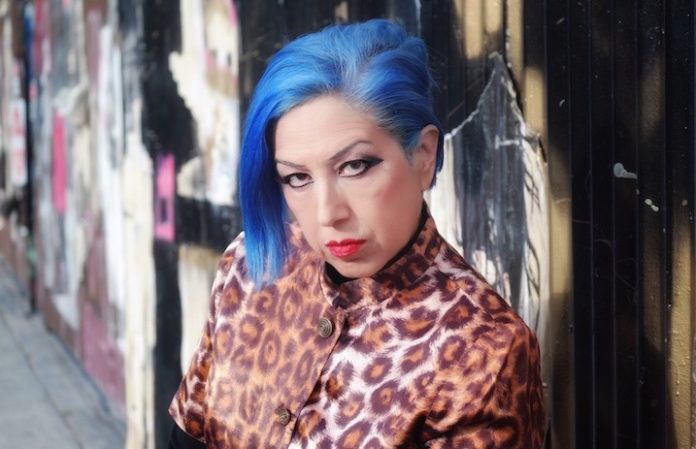 Alice Bag is many things—singer, songwriter, punk icon, feminist, Chicana, activist, published writer—and none of them are boring. Hailing from East L.A., Bag (aka the artist formerly known as Alice Armendariz) made her name on the rock scene fronting the Bags, a coed punk staple who threw down effortlessly (and quite often) from 1977 to 1981. When her band ended, Bag left music behind to pursue teaching, activism and writing books about her experiences as a Chicana in the L.A. punk scene and beyond. Recently, she’s been enjoying a cultural resurgence with a 2016 self-titled release on Don Giovanni, as well as the recently released Blueprint, featuring members of riot grrrl punk outfits such as Bikini Kill, Bratmobile and tons of other like-minded folks.

Today, AP is premiering the video for “Turn It Up,” where Bag goes toe-to-toe with a small legion of what looks like new-wave damsels as aerobics instructors. Turns out that, yes, they are aerobics instructors. “I met one of the instructors maybe two months before the shoot,” Bag remembers. “We started talking. Her name was Amelia; she was into punk rock, was in a band. She told me, ‘You should come to Pony Sweat. It’s like an exercise class where we get together and dance. We don’t care if you don’t do the exact moves; we just want you to dance and move.’ It’s fun, very body positive and the music they play is better than the boring pop stuff.” Director Scott Stuckey (also founder of the kids’ TV show Pancake Mountain) invited the Pony Sweat team to the set of the “Turn It Up” video. “They’re not trained dancers,” Bag says. “They’re just people who like to dance to good music. It looked like a dance party; there was food and drink, swapping makeup and jumping around and dancing like kids.”

In addition to the pogo-fest of “Turn It Up,” Blueprint is filled with all kinds of musical idioms from ballads (“Adrift,” “Invisible”), ska-inflected pop (“Stranger”) and calls to action (“77,” “White Justice”), all of which come off as organic with nary a whiff of contrivance. Bag spoke with Jason Pettigrew about the generational twists and turns punk has taken, why age is just a number and what kind of lesson she would impart to her teenage self should she ever find a reliable time machine. Bag has been at this for a while, but the diversity, possibility and energy of Blueprint simply refuses to chain her to one single calendar year.

One of my favorite sayings is “The settlers get the land, the pioneers get the arrows.” In your mythology, which one would you describe yourself as?
A pioneer, for sure. I feel like a lot of the people who helped to shape punk in its infancy made huge contributions that have not been adequately recognized. Their creative output may not have been properly documented. It seems to me that people started paying attention only after the initial explosion of creativity had passed, as if they were watching the ocean to see how rough the first few waves were before diving in. We were those first waves.

You’ve got several generations of grrrl punks on Blueprint, people like Kathleen Hanna of the Julie Ruin, Allison Wolfe of Bratmobile and Le Butcherettes’ Teri Gender Bender. It’s great to see that continuum represented on the album. You could’ve easily done updates of Bags’ songs, but you went full speed into the now without it sounding contrived.
I make concessions: I do play two or three Bags songs in my set. If I don’t play them, no one will ever play them. I want to honor my history. Yes, I was a part of the early L.A. punk scene, but that’s not all I have to offer. I have my new songs which I am just as proud of. If we’re talking about the feeling of inclusion and the feeling that everyone can do punk rock, I feel like that’s still happening—and I’m all about it.

I attended an in-store you did in Cleveland where you performed and read from your books. The audience had a broad spectrum of long-in-the-tooth types, as well as fans who were young enough to be your children. The continuum of punk has transcended several generations now, but when you talk to younger fans, are there things about the life/culture that they genuinely had no clue about that are quite obvious in your world?
I think the message of inclusion transcends generational divides. I sometimes run into the misconception that punk was created by and for white males or that they were somehow the dominant force in steering its course. Punk, in its inception, was diverse and inclusive. It was formed by a bunch of people who often felt like misfits in their own communities, because they were weird or creative or different in a way that the mainstream could not appreciate. In the punk community, everything that made you feel undesirable to others was what made you special and valuable to us. That’s why punk managed to have an original voice and original sound—because it was made up of people who had previously been shut out, or who were underrepresented in the rock world at large. Suddenly, queers, women and people of color had a place to shout and make noise without having to conform to anyone else’s expectations.

About this new gen’s processing of punk history: On last summer’s Warped Tour, Leonard Graves of the Dickies made waves after he went off on a rant where he publicly called out someone on the tour who was protesting their set. The person, a woman who worked on Warped in some capacity, was offended by lines like “You’re such a beautiful audience; I’d love to go down on all of you, but there isn’t enough time,” and doing his longtime schtick with his penis puppet. Now anybody who has seen The Decline Of Western Civilization knows that in those days, bands spoke their minds, and sometimes it was funny and sometimes it was ugly and sometimes it was both. So were the people who were outraged at the Dickies’ schtick completely on point, merely unaware or waaaay hyper-sensitive? Do you think it’s just showbiz for the Dickies and they really should know better in 2017?

I know some people would say, “If you don’t like the show, you can stay home,” but I don’t agree with that. It’s true that you can choose not to support something you don’t like but in addition to that, you have the right to protest speech that is hateful or offensive. I have seen the Dickies in the past and I’ve enjoyed their show, but I’ve never seen anything like what happened at that [show]. Don’t get me wrong: I think there is a place for humor in punk, but there are lines that should not be crossed for a cheap laugh, mostly because certain types of humor reinforce racism, sexism and misogyny. Shouting at a woman to suck your dick is harassment. My idea of punk is that it’s about community, not showbiz. I don’t pine for the good old days. I don’t necessarily think the good old days were good for everyone.

There was a classic Maximum Rocknroll cover that asked DOES PUNK SUCK? I keep thinking about that artifact in my head, because I’m trying to nail down the exact point when things started to suck in the greater zeitgeist of America’s punk scene. We have made significant inroads where women and people of color can express themselves creatively. But we’re still hearing stories of blatant sexism and intimidation. Did you experience a genuine cultural malaise? Or was it simply inevitable that compromise and dilution would make space for ugly elements?
Yes, I remember in the early ’80s, there was a palpable shift from the eclectic, diverse, quirky scene that punk had been into something more uniform. It felt as though there was an expected way to dress and sound—even dancing became less about jumping for joy like we did when we pogoed. The mosh pit became less and less hospitable as jocks started to get into punk, and for a while the activity in the pit became a contest to be the alpha ape. I think if you had asked me then, I would have said punk was dead, but what I didn’t know then was that things are cyclical. These days when I’m on the road, I see a lot of punk’s original values alive and well in scenes across the country. Not everywhere, but for many, punk is not just showbiz. There is a sense of community, of owning your scene, of looking out for your neighbor’s welfare, and of course, having fun, being wild and irreverent! All of those things are conducive to finding your voice and honing your power.

What advice would Alice Bag 2018 give her 20-year-old self?
Love who you are while working to become who you want to be.