Alkaline Trio reflect on the 10 biggest moments of their career

Acclaimed punks Alkaline Trio have been at it for more than two decades and have no plans of stopping anytime soon. “There’s new stuff coming up for sure, and I feel like I’ve been saying that for three to four years because I have,” says bassist/vocalist Dan Andriano, laughing. “I think it’s going to be sooner than later at this point, and I hope it’s going to be very soon. I’ve been writing, tossing around demos. Everyone’s been really patient and nice, but I miss the band; I miss what we do.”

Founding member and vocalist/guitarist Matt Skiba says things are still in the planning stages. “I’m sure that we’ll find time to get together and hopefully start writing and recording sooner than later,” he says. “There’s nothing planned, but we’re certainly far from finished.”

In the meantime, (and in celebration of the release of a vinyl box set of their 2014 live recording Past Live, which you can preorder through Feb. 14 here) we decided to chat up Alkaline Trio about some of the people, places and moments in their career that brought them to where they are today. 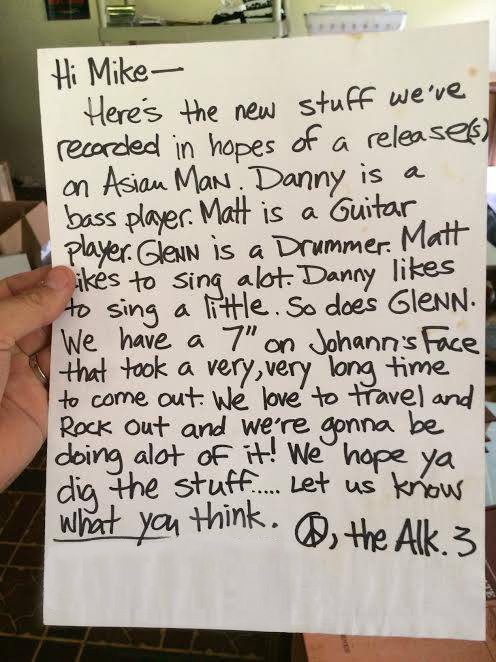 The original letter Alkaline Trio sent to Asian Man Records along with their demo.

Andriano already had a relationship with Asian Man founder Mike Park because two of his previous bands, Slapstick and Tuesday, had been signed to the label. “I could’ve easily called Mike, but Matt wanted to do it the way a band at the time would have done it,” Andriano says. What would a band at the time done you ask? “I remember talking to Matt about it and remember how excited he was getting. And then him writing Mike Park a letter in crayon and sending him the demo.” Park happily signed the band.

“We’ve definitely spent a couple nights behind bars over the years, but luckily, I can count them on one hand.”

“I remember leaving Chicago in our tour van for the first time,” Skiba says. “It was like, ‘Holy shit, we’re on tour.’ That was a huge moment, I mean, I remember where I was sitting in the van, looking out the window at the Chicago skyline disappearing behind us.”

When the Trio set out on their first U.S. tour in back in the late ’90s, times were very different.

“The first U.S. tour that we did I booked, which is—if you know me, especially now—is pretty laughable,” Skiba, a self-described “airhead,” shares. “But I used to be, not that I’m irresponsible, I’m spoiled I guess… Like when we were starting out, the show may not of been on point, but I got us the show. I got us the van. I made sure that things were happening, and I’m really grateful for the people who do that for us now.”

The guys set off in a nondescript 12-passenger van. This was before they even had a trailer for their equipment, and they would take turns sleeping on a built-in loft in the back that they stored their gear underneath. And unlike most punk bands, Alkaline Trio refrained from plastering their van in other bands’ stickers. “Everyone who toured that had band stickers all over their vans, it’s like you might as well put a sign up that just says, ‘Pull me over, we have weed,’” Skiba says.

And when they did get pulled over, they had a backup plan. Skiba says they’d tell the officer they were a Christian rock band called the Bush Pilots. “I don’t know that it ever helped,” he admits. “Definitely saying that we’re a punk-rock band from Chicago, it’s like, ‘What are you hiding that your van doesn’t look like you’re a punk rock band from Chicago.’ We’ve definitely spent a couple nights behind bars over the years, but luckily, I can count them on one hand.”

Found another photo from the @officialfacetoface @alkaline_trio Japan tour in 1999(?). I had the pleasure of playing guitar for Face to Face when the Trio was opening for them. That’s the first time I crossed paths with @matttskiba #alkalinetrio #facetoface #lifechanger

The Trio’s first time ever leaving the country was a trip to Japan. “Danny’s mom worked for an airline, I believe, and Dan got to fly for free anywhere in the world. Me and our drummer, Glenn [Porter], at the time each paid $200 round trip, first class, to Narita outside of Tokyo. “We went to Japan for two weeks and played shows, slept on floors and took the bullet train.

“Anyone who’s been there will agree with me: Japan is kind of like going to the moon. It’s definitely another world over there, in a beautiful way, but also you definitely want an interpreter because nobody speaks English. You can’t read anything there. It was one of the coolest experiences and one of the best trips I’ve ever been on.”

He also experienced another first on the trip. “I experienced my first earthquake. We were sleeping on a floor in Tokyo and there was a major earthquake,” he remembers. “It was on the news in the states, and my parents were trying to find out where we were to make sure we were OK because we didn’t have cellphones.”

But it was illuminating to see people from so far away connecting with their music. “To go over to a place where nobody speaks the language that you’re singing in and to have so many people singing along, was pretty mind-blowing.”

SIGNING TO VAGRANT
“We were just scared kids leaving Asian Man and signing to a new label,” Andriano says of the leap to Vagrant. But even Park told the band to go for it.

There was a movement going on with the Vagrant America tour and the label signing new bands. “Saves The Day, the Get Up Kids and bands like that. We were all on the same label; we were doing it at the same time, from different parts of the country but exploring different sounds,” he says. “Something cool was definitely happening.”

JERRY FINN
Alkaline Trio made multiple records with late legendary punk producer Jerry Finn [Blink-182, AFI, Sum 41, Rancid] and developed a strong connection with him. Skiba says Finn even flew to Chicago to work with them and mixed From Here To Infirmary free of charge.

“Jerry was just a beautiful guy all around, but one thing, he was a huge fan of music. He loved Alkaline Trio, and that’s why he mixed our record for us,” he says. “Even moving forward, I know that we couldn’t have afforded him, and he did those records because he wanted to.”

One memory in particular Skiba looks back on fondly happened while they were making Good Mourning with Finn, and hardcore legend Keith Morris (frontman of Off!, Black Flag and Circle Jerks) stopped by the studio to lend some vocals to the record. “Jerry has done records with Green Day, and he’s worked with some really awesome, big bands. But when Keith came into the studio, Jerry was legitimately starstruck.”

Skiba had enlisted Morris to guest on “We’ve Had Enough.” “He does these screams in it, and Jerry was like, ‘I’m not telling Keith Morris what to do. It’s fucking Keith Morris,’” Skiba recalls. “So I ended up [with] Jerry sitting next to me, but I engineered and produced Keith and told him what to sing, told him where the part was and what it was. I was pressing record and doing the talkback with Keith in the [isolation] booth and Jerry giddy as a little kid next to me that Keith Morris was in the other room singing. It was pretty awesome.”

Andriano also cites working with Finn as a major influence, both for the band and personally. He says Finn encouraged the band to explore and try new things. “He had the most incredible guitar collection,” Andriano remembers. “We would be getting ready and this truck would pull up to unload just dozens of guitars. And then they would start opening the cases; just priceless guitars, crazy models of nice, fancy guitars.” That time with Finn spun Andriano off into becoming a gear nerd. “I was sort of like, ‘Oh really, I can play this?’ And he’s like, ‘Yeah, dummy, that’s what it’s for. It’s no good sitting in that case. It might sound like shit. We don’t know until we try!’ I appreciated the mindset, and I thought it was really cool. He’s such an inspirational dude.”

“His spirit, no matter what anyone’s beliefs are, he’s truly with us,” Skiba says. “Every time we go to the studio, he’s with us. I believe in more ways than just the things we’ve learned from him, but if that is all there is, that’s pretty huge.”

CONTINUED ON NEXT PAGE: THEIR LOOK, THE LOGO, THE MISFITS AND MORE