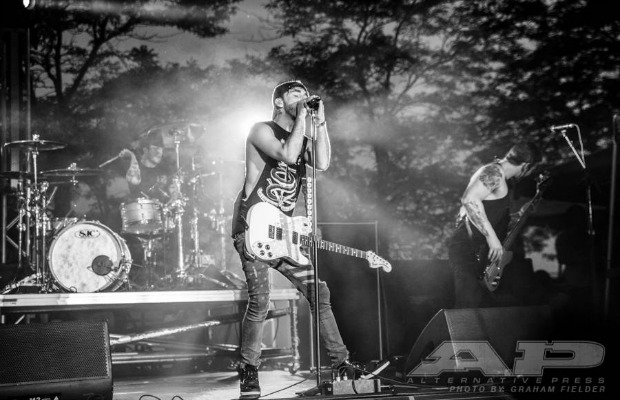 Of all the performances at Monday’s AP Music Awards, All Time Low definitely had the most scene-packed set. The Baltimore band performed a medley of songs including their own hit “Dear Maria, Count Me In”; Yellowcard's “Lights And Sounds” with Ryan Key and Sean Mackin; and New Found Glory's “All Downhill From Here” with New Found Glory’s Jordan Pundik and Chad Gilbert. They closed it with their Song Of The Year track, “A Love Like War,” featuring Pierce The Veil’s Vic Fuentes. The band took home two Skullys that night for Song Of The Year and the Artist Philanthropic Award. We caught up with frontman Alex Gaskarth to discuss the band’s performance and how they’ll top it at next year’s APMAs.

What was your favorite part of the night?
I have to go with our performance; that was such a blast. Fifteen-year-old me was freaking out inside. I think if anyone had told me in high school that one day I’d be playing at an award show with Yellowcard and New Found Glory, I don’t think I would have believed that.

Did you guys get a chance to rehearse it all together beforehand?
We didn’t rehearse all together until that morning. I had come up with a loose plan of what we were going to do, and on Sunday, the four of us went over it ourselves, just to make sure we had it down and it was sounding right. Then Monday morning the other guys from the bands came in, and we ran through it all together. It definitely felt like the chemistry was there right away.

Was there a different vibe playing at the APMAs compared to playing a regular show?
Yeah, just the excitement. There was a lot of hype; there was a lot of build-up. It was kind of nerve-racking. There were a lot of great performers and a lot of legendary artists there. You don’t want to go up and blow it in front of Joan Jett. [Laughs.] I think we really brought the energy; I think that was really the key of our performance: going out there and showing everybody what bands like ours, Yellowcard, New Found  Glory and Pierce The Veil are all about.

There were a lot of big names there Monday. Was there anyone you were starstruck by?
It’s pretty amazing to see people like Joan Jett and Billy Corgan who are massively influential in music. It was very cool to see them hanging out. I think it’s really cool for those [different] generations of bands to come together like that. It’s rare that that sort of thing happens.

Were you surprised that nine months in, people are still reacting so positively to “Love Like War?”
Yeah, I mean, that song has been really special to us. It gave our record a fresh set of legs to keep running. The song itself has done really good things for us over a long period of time. In this day and age, where it feels like songs are just a flash in the pan because there’s such an overload of information in music all the time, it’s cool when you find one that has longevity like that.

How do you guys top your APMAs performance?
That’s a tough one. I feel like we’re gonna need a year to come up with it. Maybe we get a floating stage, and we come in on a speedboat performing. That’s what you guys need to do next year: You need to float the stage in the harbor. If you figure out a way to float it, and then every time someone gets an award, they have to jump in the water.

I’ll submit that to our marketing team, and I’ll let you know.
[Laughs.] You gotta let me plan this thing. It’s gonna be great.