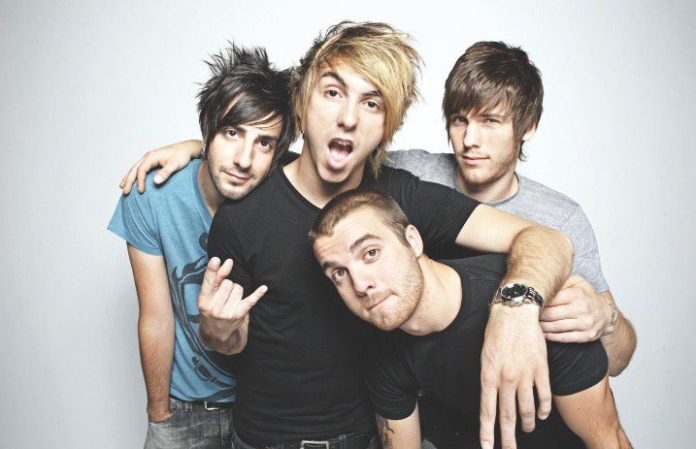 All Time Low may have scored a nomination for “Best Rock Video” at the MTV Video Music Awards this year, but just eight years ago the band walked the red carpet only to be totally ignored.

During the summer of 2008, All Time Low traveled the country with Katy Perry and Boys Like Girls on the Six Flags mtvU Video Music Awards Tour and were invited to attend that year’s VMAs.

Lead singer Alex Gaskarth served as the VMA red carpet correspondent for BuzzNet, where he chatted with with faves like Panic! At The Disco and Paramore and kept tabs on all of the A-list celebs strolling by with massive “bling-bling.”

Halfway through the red carpet, Gaskarth retreated from his interviewing duties to change in a bush (see video below) so that he could walk the red carpet with his date, ATL guitarist Jack Barakat.

“We were late [to the carpet], so we ended up showing up right around the time that all the important people showed up,” Gaskarth and Barakat told MTV.  “We were sandwiched between Christina Aguilera and Fall Out Boy. So naturally no one gave a bleep about us.”

Finding a professional photo of the guys on the 2008 MTV Video Music Awards red carpet is actually impossible. Some of the paparazzi didn’t even bother and literally shut off their cameras while the guys posed—ouch.

Since the band hold a nomination this year in the “Best Rock Video” category for their fan-fueled video “Missing You,” we are sure they won’t be ignored this time around.

Will ATL beat Coldplay, Fall Out Boy (featuring Demi Lovato), Panic! At The Disco, and Twenty One Pilots? Watch the MTV Video Music Awards on Sunday, August 28, at 9 p.m. ET/PT to find out!