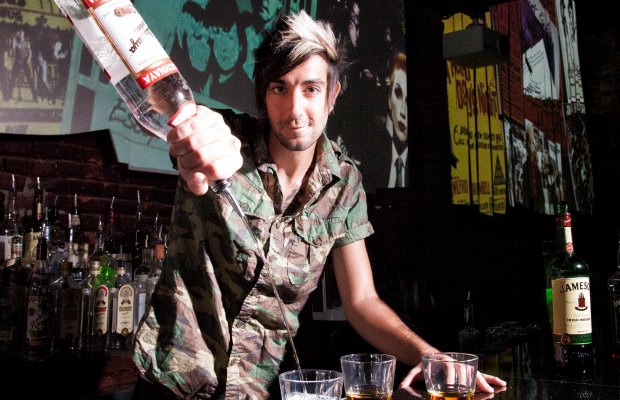 All Time Low’s Jack Barakat has a birthday coming up on June 18, and he’s celebrating it in style with the grand opening of his very own music-themed bar in Los Angeles. Barakat teamed up with Jon Nichols of Dirty Model Movement to start The Riff, a home for those with an inclination toward rock culture.

The Riff pays homage through its dark decor and impressive music selection to the late ’90s to early 2000s MTV Rock Generation, and blends grunge, pop punk, and alternative rock in its influences.

We talked to Barakat about the many sources of inspiration behind The Riff, how the idea came to life and his grand plans for the big opening June 17.

You opened The Rockwell, a scene-oriented bar in Baltimore, a few years ago. What made you want to get this one in LA started?

JACK BARAKAT: I started the Rockwell because of a buddy who owns an old record store in Baltimore, one of the oldest record stores still around in the East Coast, called Soundgarden. There are so many bars in Baltimore that are just, you know, you just go in and drink. Some of them have like open mics and some of them are just sports bars. There wasn't anything like a theme bar, where people wanted to hear good rock music and early-2000s emo/pop punk go. We would tour England, and they had tons of places like this. It's so common over there to see that, and I was like, “Why isn't that over here in the U.S.?” There are just as many fans of this style of music in this genre of music in the States. I think it's slowly starting to make its way to the U.S., you know, with things like Emo Night out in LA, and then there's one in Brooklyn. They have it all over now. After going to see Emo Night and seeing how all these bands need a place to hang out, not only for Taking Back Tuesdays, which is only one night a month, but just having a spot to kind of go to on the weekends as well.

We had so much success with the Rockwell in Baltimore. It's a bar where you don't care. No one is too cool to dance or rock out—just kind of like, lose their shit. There's no judgement. It's kind of a place for everyone to be themselves, and I think that's what we want to do in LA. When I first moved out to LA when I was 21, Angels and Kings was about to open up. Pete Wentz asked me and Alex [Gaskarth, vocals] if we wanted to be investors, so we had a hand in the opening of Angels and Kings out there. It was an unbelievable setting for us to have. When you're 21, you're young, you just moved to a new city, and here you go, you have this bar where tons of fans are hanging out and people your age, and everyone kind of has the same mentality. There's nothing like that in LA right now, and I miss that.

I’m in a partnership with Jon Nichols. He's a really big part of this. He's the one that brought this to me.

Why can't someone miss going to The Riff? What do you think will be the thing that gets people in the door?

I think the atmosphere is going to be amazing. First of all, it's pretty fucking packed. It's a really big bar, so it's a cool place to throw parties because there's enough room where in one of the rooms, we can have a live acoustic band set-up, so if a band has an album release party, or they have just anything they want to do, any kind of event, there's just so much room. It's going to be music-themed. There are going to be instruments all over the place, and band pictures of your favorite bands from live shows. It's just going to be very music inspired and driven. We kind of want to do what we did with the Rockwell in Baltimore and create a space where you can be yourself with no judgement and just listen to what you want to listen to. It's not to say that it'll only be rock music played there. There's going to be something for everyone. But that's going to be a majority of it.

What are you thinking for playlists?

I mean, I'm pretty biased to the pop punk, pop rock genre. My [birthday] playlist, I'm doing Green Day, Blink-182, Jimmy Eat World, Good Charlotte, you know the stuff I grew up on. But, the coolest thing about The Riff is that we're going to play Muse, we're going to play harder rock, we're going to play hip-hop. It's really going to be all over the place, and it's not going to be a club. There are a lot of clubs in LA, where it's all about who you know to get in and you're standing on a table to buy a bottle. We just want a whiskey-inspired bar. There's no cliques, there's no anyone kind of looking down on you. It's just going to be very kind of chill spot.

Sort of like a venue, with an emphasis on the alcohol?

Yeah, absolutely. I'm hoping it becomes a spot where bands come to hang out. Where bands and fans alike can hang out in the same area and just have a good time.

What sort of cool things do you guys have planned for the release party? It's everyone's dream to have a bar opening on their birthday.

I must admit, I do get a little teenager when it comes to my birthday parties. I make them, like a sweet sixteen girl would. [Laughs] I kind of go all out.

To be honest, it's not all about me and my birthday party. My big thing when I throw crazy birthday parties is I want everyone to have a really good time. To be honest, I'm sure I'll have a great time; all my friends are coming. But I really want my birthday party to be about everyone else having just an awesome time and hopefully not remembering much….I'm pretty sure Brian Dales from The Summer Set's going to do a DJ set, and I'll probably do some DJing, and one of my really good friends Mikey Way is going to help host the party with me, so he'll be there with me. And I just, that's the whole kind of mentality along with this place. Bands hanging out, and kind of bringing tour to the after party. The ultimate after party.