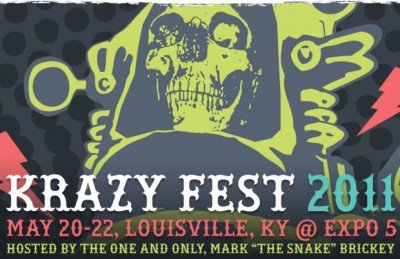 We here at the AP Skyscraper were so excited about the return of seminal punk and hardcore festival KRAZY FEST that we had no problem plunking down the ol’ corporate credit card to cover our trip down to scenic Louisville, Kentucky. Three days, 50-plus bands, a severe thunderstorm, blistering heat and a whole lot of Taco Bell and Starbucks later, and we’ve made it out alive (just barely). To commemorate what is likely the best weekend we’ll have all year, we’re bringing you the first annual KRAZY-FESTIES, celebrating the best of Krazy Fest.

Krazy Fest saw its fair share of recently reunited bands gracing its stage this past weekend, but none sounded better (and were less-prepared) than Hot Rod Circuit. If HRC frontman Andy Jackson is to be believed, three-fourths of their reunion lineup—the same that recorded their first three albums—hadn’t played together since 2003. A few flubbed notes and missed vocal cues aside, the band sounded phenomenal for having practically zero rehearsal time, pounding out classics like “Radio Song,” “Irish Car Bomb” and “The Pharmacist.” Even more exciting: Jackson announced onstage that the band will release a new song on iTunes next week and will be booking a U.S. tour this fall.

We dipped our toes into the live-streaming pool at Krazy Fest this year, broadcasting a number of sets including heavy-hitters like Hot Water Music, Small Brown Bike and Samiam. But our stream numbers took their biggest jump when screamo revivalists Touche Amore took the stage Saturday night to an absolutely packed house (it didn’t hurt that it was pouring down rain outside, causing just about everyone to take shelter indoors in front of their stage). Check out their set below (jump to the five-minute mark).

Mark Brickey was one of the key people involved in the original Krazy Fest run from 1998-2003, so to invite him back as this year’s emcee was one of the smartest decisions festival organizers made. Simply put, dude’s hilarious:

However, he was given a run for his money by Self Defense Family frontman Patrick Kindlon. Conjuring up images of a young Tim Kinsella, the shirtless frontman spent half of his band’s set on long-winded (and extremely absurdist) rants that were frequently funny and somehow always managed to make a solid point, frequently earning both laughter and applause.

As rain clouds loomed over the festival grounds on Sunday afternoon, organizers scrambled and moved Onelinedrawing and Dave Hause indoors to try and move the show along smoothly. OLD’s Jonah Matranga took the last-minute venue change in stride, delivering a set of cover songs and fan favorites before calling on longtime friend and Thursday drummer Tucker Rule (who was at Krazy Fest playing with his other band, I Hate Our Freedom) to take the stage for an impromptu runthrough of Far’s “Mother Mary.” It was a special moment between friends that we (along with a few hundred other people) were lucky enough to witness. (Jump to the nine-minute mark to see for yourself.)

As has become traditional with modern-day punk festivals, many bands will join together for impromptu, unofficial shows in the oddest of locales—and this show absolutely took the cake. Taking place at Fantasy’s Island, a run-down strip club located less than a mile from festival grounds, the bill consisted of Self Defense Family, Fireworks, Make Do And Mend and headliners Bane—accidentally billed as “DANE” on the strip club’s outdoor marquee. Each band shared gear and played a handful of songs—unfortunately, the lone stripper still on the clock fled the stage early into the show. Still:  Bane played a strip club. Just watch the video.

This was close, as numerous bands gave shoutouts to the recently deceased pro wrestling legend (and Tigers Jaw frontman Adam McIlwee demonstrated a surprisingly deep knowledge of the wrestler’s career). But the Bled closed out Friday night with a shirtless James Munoz commanding the crowd to “fucking mosh for fucking Macho Man Randy Savage right goddamn now, motherfuckers,” before smashing a guitar during the final breakdown of “Red Wedding.” (Jump to the 29-minute mark in the video below to see for yourself.) If we had to describe it in two words, we’d simply say: Oooooh yeeeeeah.

There were some seriously incredible performances all weekend long, from established bands (Lucero, Small Brown Bike) and up-and-comers (La Dispute, Title Fight) alike. But Gainesville’s favorite sons brought down the house with a set loaded with sing-alongs like “Remedy” and “It’s Hard To Know.” But what really set the room ablaze was a three-song mini-set where members of the Bouncing Souls shared the stage with HWM to run through “Wayfarer” and “Trusty Chords” as well as the Souls’ “True Believers.” The bromance was in full effect, and the whold crowd felt it. HWM might not have been the last band of the night, but there’s no question they were the headliners in most attendees’ eyes and hearts.