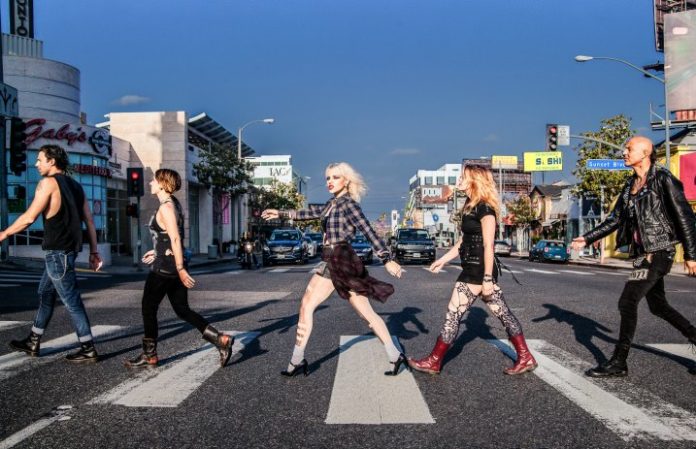 If provided only a photo of Barb Wire Dolls frontwoman Isis Queen and locked in a room with their music at speaker-shattering levels, you might just think you'd traveled back to the late '70s and landed straight in one of those classic, CBGB gigs we young punks can only fantasize (and salivate) about in modern times.

Barb Wire Dolls are something special between '77 punk produced with modern recording technology, grazed with a hint of big-rock choruses, acting merely as chewing gum to be popped behind the attitudinal teeth of the gritty grunge era.

At a listen, you may have thought they'd come up alongside our West Coast punks (ie. Iggy And The Stooges) or East, even (ie. Blondie), but you'd be miserably wrong there, as well. Their snotty sound hails from the other side of the ocean.

No. From the Greek island, Crete, which is where it all begins, as explained by Queen herself:

“In 2010 we sold everything we owned and left our home at an artist commune on the island of Crete for Los Angeles after being discovered by KROQ DJ Rodney Bingenheimer who was the first person to play us on the radio. Rodney invited us personally to Hollywood to play a KROQ show with him and we met him straight from the airport.  Later that night, we went to the famed Sunset Strip and ran into Lemmy by chance. We talked about early punk rock and he told us to 'always charge hard'—and we did.”

The band then went on to dominate the first the LA scene, then the world, playing over 700 shows all as a DIY band. And just like that first fortuitous meeting in Hollywood, their paths later crossed with the late legendary Mötorhead vocalist/bassist.

“In 2015, [when we were] the house band at the legendary Whisky A Go-Go, Lemmy saw us live again. He said we were 'ready to carry the torch.' He took us under his wing and signed us to his record label Mötorhead Music and our new album Desperate became the label’s first non-Mötorhead release.”

Cut to the present where Barb Wire Dolls are hoping to start a new movement with their sound. “Heart Attack,” the video for which we have exclusively for your viewing below, is a rallying call. “We are young/We are strong/We are the ones/Here we come!” Queen shouts over live footage from from the Whiskey they have come to call home.

Says Queen, “Isn't it time we shake things up? Isn't it time for new blood in rock and roll? A new movement? It is! The new Street Generation is here and we want to destroy the old and bring in the new. There is a new scene exploding and it's part Riot Grrrl, part grunge, and part punk… and it's all happening now! See you in the pit!”