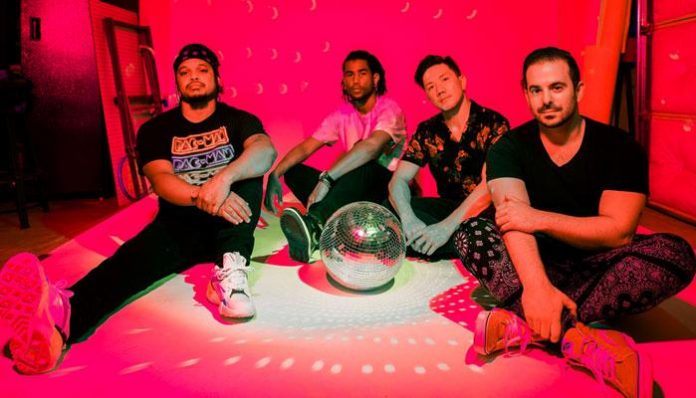 An acquaintance once told this writer there’s “no real punk rock in Vegas.” But if the absence of punk means artists are free to follow their bliss (without outside forces deciding it for them), it’s pretty damn cool. In other words, Vegas was the perfect place for Amarionette to happen. AltPress is premiering the band’s new LP, Sunset On This Generation, today. And we suspect you’ll be smiling and head-nodding in no time flat.

Out of the box, Amarionette were better players than most of the corps of post-hardcore. (Anyone remember “Chloroform Rags Work On Everybody”?) But that was years ago. These days, Amarionette have grown into a funk-rock juggernaut with an ’80s pop sensibility and 21st-century musicianship. On Sunset, the quartet sound like the spiritual descendants of Head Automatica and Men, Women & Children crossed with the soul-tech vibes of Dance Gavin Dance. (It’s not shocking that former DGD frontman Kurt Travis is Amarionette’s mentor and confidante.) Amarionette are the band who will make you give up your mosh pit moves for some classier dance steps.

Guitarist Nick Raya checked in with AltPress to discuss the message he wants his band to get across (more posi, less doom-scrolling), his friendship with former DGD frontman Travis and what the coolest three-song block on the radio would sound like.

Sunset On This Generation is great. It’s commercial as hell, but there’s a fire and a personality that comes through. How important is Las Vegas to the essence of this band?

NICK RAYA: Vegas is essential in the sense that we are from here, and we have been given several great opportunities to play at numerous venues on the strip and downtown. However, with the exception of a couple of places in the downtown scene, Vegas doesn’t have many smaller 300, 400-cap venues. It seems like most of the local places are either very tiny rooms, or you’re playing at House Of Blues. Not many in-between options, but we love it here. Lots of great opportunities.

Read more: 9 bands who have had success with multiple vocalists

The title of the album seems rather doom-laden for a band who have a pop sensibility and a need for a solid backbeat. So straight up: How are you collectively feeling?

You’re not the first person to say that the title of the record is dark. To us, it symbolizes more of a new beginning than a “doom and gloom” feel. We view it as positive and uplifting, and we are on a new musical journey. Moreover, there are a lot of changes happening in the world today, and we would like to be a part of that positive change.

You’ve worked with Kurt Travis and Andrés. What do they bring to the table? Are they quality hangs, excellent sounding boards or something else altogether?

Those guys are probably the two closest friendships I have personally in the music industry. Back in 2016, we were signed to Kurt’s label, Esque Records, and we have been great friends ever since. We have done several tours together, and we were his backing band for a while with his solo stuff. We also met Andrés a while back as well but really started to hang out during the Repeating History touring cycle. We brought Andrés out on tour in March of 2017 and had a blast while we both were openers for Kurt. He has certainly made a name for himself, and he’s an incredibly talented songwriter that we love to work with.

Both of these guys on a personal level are two of the best dudes I know. Any time I ever want to talk about anything music-related, they are always down to listen. I talk to both of them very frequently. I think it is also fair to say that Amarionette have had some of the best times of our lives with those guys. Being out on the road is always a blast, and we miss it a lot.

If you were a college DJ, what would you play in a three-song set with a new Amarionette track? Which two artists would you bookend yourselves with?

Great question. I would probably play “Modern Disco III” as our song choice along with a Paramore song and probably a Dance Gavin Dance song.

There’s a significant evolution in Amarionette’s body of work. This is the beginning of a new chapter. What do you wish to accomplish with it? Big Spotify numbers? Major-label deal? Or are you not ready to cede any kind of control over anything this band want to do?

At some point, I think we all acknowledge what we are doing and have continued to do this for so long because we truly love what we do. My goal is to try and establish a following that will stick with us through thick and thin. We have gone through a few changes over the last three years. But again, we love what we do, and we will continue to move forward. Big streaming numbers would be awesome because we are completely self-sufficient at this point, and all of the revenue helps, but we just want to make music for ourselves and for our fans. Nonetheless, if we got an awesome offer from a major label, we are all ears.

Assuming that Amarionette can get back on the road post-pandemic, I think we would try to tour ASAP. Who knows, maybe even another record? So far we have another five demos of instrumentals recorded for the next album and another five [or] six more in the pipeline. We are very stoked on the future.

Stream Sunset On This Generation below.