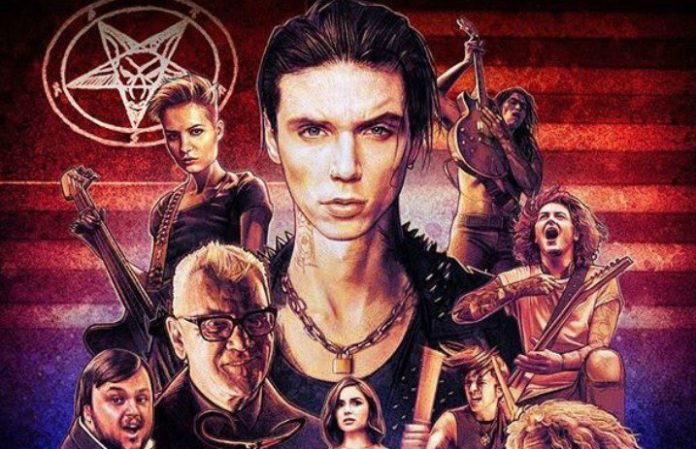 Ash Avildsen’s American Satan has been out for almost a week now, and the crowd has been turning in mixed reviews for the graphic rock 'n' roll film. While it's gained an 87-percent audience score on Rotten Tomatoes, the scene obviously seeming to like movies starring some musician favorites such as Andy Biersack, there are those who still have some critiques. Check out what we thought about American Satan with these three differing reviews—and then scroll down to see how fans felt about it.

After more than a year-and-a-half following the initial announcement of Ash Avildsen’s American Satan, the film premiered in theatres Friday the 13th — the perfect date to coincide with the dark plot and satanic elements. If the star-studded cast, featuring Denise Richards, Malcolm McDowell and Mark Boone Junior, wasn’t enough to pique your interest, Andy Biersack (Black Veil Brides) and Ben Bruce (Asking Alexandria) made their silver screen debuts as members of the film-created, rock ’n’ roll group, the Relentless.

The film tells a twisted tale of a deal with the devil that promises the members of the Relentless the rockstar lifestyle of sex, drugs and rock ’n’ roll, which may or may not be an exaggerated perception of reality. Despite the movie’s 111-minute runtime, a tragic chain of events quickly transpires, leaving the genre of rock ‘n’ roll appearing satanic, chaotic and deadly.

Although Biersack is no stranger to the role of frontman (as leader of both Black Veil Brides and Andy Black), his talent in American Satan is focused on his acting, while Remington Leith (of Palaye Royale) provides the grungy vocals behind the Relentless. The film’s soundtrack single, “Let Him Burn,” undeniably set the bar high after finding commercial success, which left the audience hypnotized and longing for more from the fictitious group.

Fans of Black Veil Brides and Asking Alexandria may have initially been disappointed when it was first announced Biersack and Bruce would not musically be involved with the film’s score (though it does involve Korn’s Jonathan Davis and film score composer Nicholas O’Toole), however, this left room for both to explore the realm of acting and create characters for the film that are separate from their realities. Biersack and Bruce fully immersed themselves into their roles as members of the Relentless and displayed their natural charisma with the cast on set. Biersack’s portrayal of frontman Johnny Faust came across as effortless on the big screen, with a devilish smile that could make anyone swoon; while Bruce’s character Leo Donovan offered a more emotional experience.

Whether Avildsen took advantage of the common misconception of rock ’n’ roll dancing hand-in-hand with the devil, American Satan captures destruction, desire and underlying elements of truth within the music industry. American Satan is far more than a glimpse into life on the road and a fantasized rendition of being a rockstar, but rather, a dark reality that reflects any musicians’ wildest dreams and deepest fears. — Paige Owens

“American Satan is not a subtle movie”

American Satan is not a subtle movie, but that’s to be expected from a movie about a style of music whose weapon of choice is an axe. Its scenes are brash and loud, filling the screen with screaming fans, mayhem and destruction. The camerawork, crafted by cinematographer Andrew Strahorn, is often fantastic even when the scenes jarringly jump from high-resolution closeups to grainy concert footage to black-and-white and back again.

Andy Biersack comfortably transitions from real-life frontman of a band to star of a movie in the role of the likeably troubled rock ’n’ roll sensation and lead singer of the Relentless, Johnny Faust. While his charm commands the audience in nearly every scene he’s in, even in scenes performed alongside veteran actors such as Malcolm McDowell and Mark Boone Junior, it’s not enough to make up for American Satan’s flaws.

Most staggeringly, this movie’s choice to use rape as a plot point is a dangerous and ill-advised decision in the absolute best-case scenario, but this movie chose to throw it in as a half-muttered line thrown away on a street corner. Rape should never be used as a plot point.

This movie has a lot of good ideas that spend the entire 111-minute runtime fighting for prominence. A few lines and scenes stand out and show that with some more work, American Satan could have easily become something special. Biersack showed off acting chops that could help push forward a career on the silver screen, and Remington Leith has the vocal talent to help propel Palaye Royale to future stardom. — Ryan Smythe

American Satan is jam-packed with sex, drugs and rock ’n’ roll. It’s exaggerated, but that’s how Ash Avildsen’s storyline was intended to be. It’s a scene-studded affair that music lovers can more than appreciate. Seeing the likes of Black Veil Brides’ Andy Biersack and Asking Alexandria’s Ben Bruce bring their acting chops to the silver screen was more than a good surprise. The characters held their own alongside fellow actors, including Denise Richards, Drake Bell and BooBoo Stewart; and appearances from the likes of Ash Costello (surprise!) and internet darling Acacia Brinley were only welcomed.

And let’s not forget the soundtrack: Palaye Royale’s Remington Leith was seemingly meant to be the voice of the Relentless. Leith’s vocals embodied the burning passion that Biersack brought to his role as Johnny. The energetic live performance scenes were expertly filmed, varying between close-up band shots and wide-angled crowd shots that show just how massive the Relentless’ fanbase was, and with the film’s flashback setup staged at the start, how fast their rock empire grew.

American Satan is a roller coaster ride from start to finish, and there are undeniably aspects that should be reconsidered or reconstructed—especially the portrayal of women, who never seemed to be more than extras thrown into the “bad boy” mix or femme fatale-esque characters used to bring the downfall of the male frontmen. But what the film does get right is the dim reality of a life built on giving into temptation—and the demise it inevitably brings. — Maggie Dickman

Mind fucking blown. #AmericanSatan was phenomenal. This movie lit the ambers of inspiration to start writing music again.
Thank you!

HOLY SHIT!! That moment when you watch #AmericanSatan and realize your queen @Ash_Costello is also in it!! ����❤��❤��✊

@andyblack, all I have to say is WOW! great fucking movie I loved it and would see it over and over again if I had the money! #americanSatan