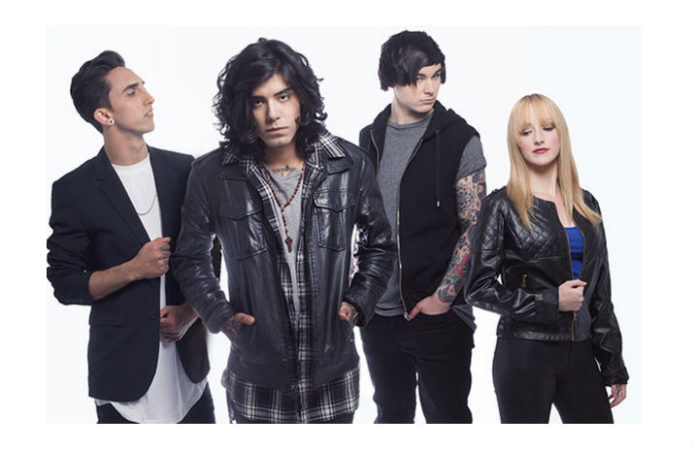 Alt rockers American Wolves have teamed up with AP to premiere an acoustic version of their single “Part Of Me.”

The new version scales back on the original version of the song, offering an alternative listen. The band is currently on tour with Escape The Fate.

We caught up with the band to talk about their new song and their current tour.

Tell us about the song and what inspired it. What was the writing process for this track like?

Pires: “Part of Me” was written during a time where I felt that the world was against me; I felt like giving up. This song helped capture a moment in my life where I saw beyond the darkness and chaos around me. Writing “Part of Me” gave me clarity, and helped me pick myself up when I felt like I had no where else to turn. The writing process also helped us find our sound and inspiration to write the rest of the American Wolves songs.

Zell: “Part of Me” is a song about overcoming the darkness in life, and knowing that what's ahead of us is far greater than whats behind us.

Why did you decide to record your single in this stripped down acoustic version?

Zell: The first recording of “Part of Me” was done with Dan Korneff (Paramore, Breaking Benjamin), and we took a very uplifting, driving, and radio friendly approach to the song. With the alternative version, we wanted to show the other side of what brought the song to life.

I believe a great song is a great song; regardless of the arrangement. Our goal as a band is to write songs that can be interpreted and felt in many different ways so this alternative version gave us a chance to approach the song from a different perspective and explore our sound.

Pires: Presenting this version of “Part Of Me” gave American Wolves a chance to reach a different audience. Maybe there's someone out there who is going through a hard time in their lives who really needs to hear this version. It'll be awesome to see how people react to this version in contrast to the version we recorded with Dan.

You're on tour now with Escape The Fate. How is that going? What has the reaction from fans been like?

Pires: It's rather early in the tour, but getting the experience of working with such a talented and hard working band has been a blessing. This tour is giving us a chance to explore the country, play awesome shows and make new friends. We started off with a sold out show in our drummer's home city of Phoenix, AZ which was amazing.

We look forward to meeting more fans that know us from social media and our music video release. This the beginning of something great and many memorable stories to come.

Speaking of fans, what bands do you guys look up to? What bands were plastered all over your walls and blasting in your headphones growing up? How has that influenced your music?

Pires: I've always had a love for great songs. Through great songs, I found great songwriters (Martin Johnson, Josh Ramsey) and they've influenced me to not only write music that I love, but to also help give other people a voice through my songwriting.

Zell: We love 30 Seconds to Mars, Boys Like Girls, and a ton of other bands but those have been two bands that have influenced us a lot, and helped shape our sound and who we are as a band.

We enjoy dissecting music and studying the core elements that make up the music we love. In doing so we learn a lot about our selves and the bands we look up to.

What are you guys listening to on the road?

Zell: We listen to a lot of different music while we're on the road. Lately while we're driving we've been jammin' a lot of Blink 182 and the 1975. When we're getting ready for shows I usually throw on the newest the Veronicas record and sing along to some songs. We love listening to feel good music.

We know when the Veronicas are playing in the green room, Rod is vibing out before a show.

We know when Armor For Sleep and Underoath are playing, Rob is driving 15 hours through the night to the next show.

Pires: We know when Nikki is jamming out with her headphones on, she's listening to playlists she's made for certain parts of the country. When traveling through the Southwest, U2's The Joshua Tree is a traditional must for her as well as when going through the Deep South, Kings of Leon is always on.

We know when Tyler has his headphones on, he's whatever the mood calls for. From Lecrae to LetLive., 30 Seconds To Mars and Twenty One Pilots, you never know what he's jamming.

Zell: Like Rod said, we listen to a lot of different music. “Summertime,” “Rap w/ Substance,” “Country Jams,” I just vibe to whatever playlist the mood calls for.

Pires: We are very thankful to be where we are today and for all of the support we've received. We put a lot of love into our music and we can't wait to share it with the rest of the world.

Being in American Wolves has been surreal so far, but we're just for kids who have had an amazing opportunity to grow together.