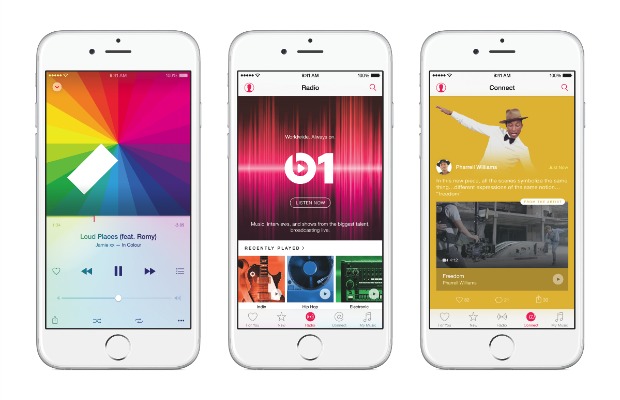 While Apple is busy converting iTunes fans into Apple Music subscriptions, there are 75 million Spotify users wondering which service best fills their headphones. There’s some interesting new offerings in the Apple Music product like Beats1 and human-curated playlists, but let’s focus on how the new app compares to how users currently use Spotify.

Let's not pretend that Spotify's four-year head start doesn't matter. Those who have subscribed for years have settled into a workflow with the service, getting comfortable with the streaming green. Users know exactly how to accomplish any task thanks to years of familiarity. For Apple Music to steal a subscription, it must be more than marginally better or users will stay put, simply out of ease.

The most basic function of any streaming service lies in its ability to access a seemingly infinite number of songs instantaneously—the promise that $10 a month subscriptions have more bang for your buck than a $10 digital album purchase. The process is fairly similar within both apps.

The first difference comes from the search screen. Spotify offers up your recent personal searches as suggestions, reminding you what you’ve been looking for (or if you have musical ADD, distracting your quest for new tunes). Apple Music is more interested in what other people are spinning, displaying “Trending Searches” (lead by “Bitch Better Have My Money” at the time of writing). Both approaches have merit, so this’ll come down to personal preference for most.

Inputting our desired search nets a difference experience with each app. Spotify’s predictive search immediately categorizes by Top Result, Songs, Artists, Albums, Playlists and Profiles–unless you’re digging for deep cuts or an obscure band, you’ll likely find what you’re looking for without a single scroll. Apple Music’s search requires an extra step, asking you to hit the search function before showing Spotify’s categorizations. An additional click seems insignificant in word, but those extra taps add up quickly when we’re talking about an app you’ll utilize multiple times per day (and an extra click in their primary search function, no less).

Accessing a playlist is essentially the same for both options, though there’s a glaring omission from Apple Music in the process of playlist creation. Spotify allows users to start building new playlists at any point within the listening experience. Don’t want to forget that new song you just discovered? One click on “Add To Playlist” displays your current playlists with a plus button to create new playlists. Meanwhile, Apple Music requires users to tap back to My Music to make a new playlist, then flipping back to your current listening to add. It’s arduous and impractical in this state and needs to be addressed immediately in the next Apple Music update to keep users interested.

Unless you’re planning on wrecking your data plan, saving music for offline consumption is essential. This is where Apple has a leg up on Spotify. An option within your Apple Music library allows the app to only surface music stored locally, immediately letting a user know what albums and playlists they’ve downloaded for that long road trip or plane ride. The only way to create that same separation between streaming availability and downloaded music within Spotify is to throw your phone in airplane mode—not a real option.

It’s a bit of a draw at the moment, as each app takes a lead in different categories. Now that the streaming competition is more fierce than ever, expect rapid development for each product. Though Apple Music’s three-month free trial seems like an appealing reason to immediately cancel a Spotify subscription, the $30 you’ll spend on Spotify during that time is likely worth the cost in personal explorations of each offering. By the time Apple’s paid service kicks in Oct. 1, both apps could look completely different. For now, take a look at both and stay tuned.