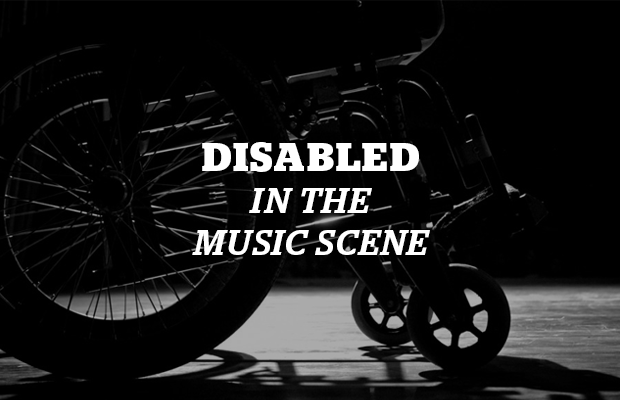 All superheroes have an origin story. For those realizing their musical superpowers, the origin story is usually heard, not seen. Musical superheroes can have an origin story be a saving grace, as was the case for Richmond, Virginia teen, Becca Denius, who promotes local shows and owns the burgeoning booking agency Terminally Trill. Denius exited the hospital with a quote from her mother leaving a lasting impression: “If it weren't for music, I would've lost my daughter a long time ago.” These musical endowments can be hereditary, like how Sean Gray, owner and creator of the website IsThisVenueAccessible?, remembers being inspired by his father's record collection. One's first chapter can be a series of interlocked events or a logical progression into a greater story.

Here's where these narratives gain most of their nuance: Denius and Gray have physical challenges. Gray grew up with cerebral palsy, and Denius has Friedreich's Ataxia. These challenges could be considered the villains of their origin stories. Yet, how both wrestle with adversity speaks volumes about how they realized their strengths and how their favorite music scenes allowed their capabilities to flourish.

For Gray, living near the Baltimore punk and hardcore scenes allowed for great opportunities, like catching Fugazi's last handful of shows before disbanding in the late 1990s. Growing up with cerebral palsy also gave him access to music in unexpected ways outside shows. As Gray recalls, “I would do physical therapy and if I did well my dad would give me a record, I'm sure I destroyed a few original pressings of Ramones records when I was five or six, but my dad was cool about it.” These two worlds converged in the form of issue-driven benefit shows and compilations, and Gray realized activism could also be shaped around his own experience. Creating his website, which serves as a crowdsourced and crowd-reviewed resource of hundreds of live music venues across the country, has given a voice to a wide swath of showgoers previously unrecognized. Gray believes it important to remember that “disability is a spectrum and that what is accessible or inaccessible to me may or may not be for someone else.”

For Denius, her voice grew via another crowdsourced and slowly-growing internet resource. Even though she herself calls the Defend Pop Punk Facebook Group a “work in progress,” she was comfortable sharing her story to over 20,000 user accounts simply because others “are also searching for an outlet, and they don't currently know where or how to express their feelings.”

For Isaac Marquardt, finding solace behind Wisconsin emo band Barely Civil's drum kit is how he best negotiates a disability. His road to the instrument followed two foot-straightening surgeries in 2009 and his story continues six years later with a few hiccups. “Our guitarist met one of his favorite bands and when they asked about [Barely Civil], he panicked and his first response was to say that the drummer had cerebral palsy, which led to some awkward laughs and them walking away.” Yet, his motivating mantra, “do what you can, just make yourself happy” allows him to move forward with music.

Kyle O'Neil might be winding down his own career with Fireworks as the pop-punk band coasts into hiatus mode, but his viewpoint ultimately remains the same: “I don't like the term 'disability.' And I've never let my hand define who I am. I've just always tried my best to be me.” For the Michigan-based bassist, who worked with a specialist to develop a prosthesis to help ease the rigor of live performance and more complex playing styles, there seems to be another simple course of action to aid those in need of a signal boost, regardless of limitation. “I just think the music scene could just use some open-mindedness in general. That could help with those issues as well as many others.”

For the families of these musicians, it seems open-mindedness, especially surrounding others with physical challenges, goes hand in hand with the mental gymnastics associated with being a touring musician. While neither songwriter directly faces these limitations, their family ties have allowed them to better understand the obstacles facing their relatives.

Oliver Bierman is Denius’ brother, so the latter's growth in the Defend Pop Punk Group makes sense, as Bierman fronts the pop-punk outfit Broadside. As the vocalist remembers it, Becca's life with Friedreich's Ataxia began long after birth and “the lines were suddenly blurred between a skinny, clumsy child and a young girl with a crumbling foundation. I felt guilty that all my limbs 'worked' and I still feel guilty.”

But this guilt has turned into steadfast support. Ultimately, Becca's turbulent teenage years supercharged this sibling bond, even while Broadside is beginning to gain national attention for their debut LP, Old Bones. “I can’t help but feel like I have to check on her each day. I wouldn’t say that it affects me in any other way then it would any other brother.” However, in keeping a relentless relationship with his sister, Bierman has been afforded a new lens with which he now tries to view every trying situation. “I find inspiration in powerful people. I feel like quoting what I wrote…inside of the Old Bones CD: 'my sister for showing me that true strength isn’t physical at all but the willpower to be a better human being in such an unfair world.' The most inspirational thing to me is when you deny the cards dealt to you if you feel like you deserve a better hand.”

For Matt Wieder, a guitarist for Louisville genre-hoppers Frontier(s), two relationships remind him where one's cards fit in a larger deck. Wieder's young daughter, Hazel, has mild cerebral palsy, and raising her has allowed for an understanding of a larger umbrella of hardships. “When [my wife and I are] at physical therapy with her, we're working alongside kids whose disabilities are much more severe than Hazel's. It definitely helps keep things in perspective, and reminds you that if your biggest challenge with her that day is her disappointment over the sparkly light-up shoes not fitting over the brace, then you're doing pretty good.” At the same time, it becomes a challenge (as it must for every parent) to reinforce that one's challenges don't define them, even at a young age. Wieder has learned to reach his daughter, through music as well as his brother-in-law, who has an intellectual disability. While Hazel's love for rock music draws her to the songs Frontier(s) create, Wieder's brother-in-law felt a positive force emanating from the cinema-grade stageshows of the Philly punk group Ink & Dagger. “His favorite type of movies are horror movies and he's really into striking visuals. At the time [the band] was in full vampire face paint and strobe light mode. It was pretty cool to see him just standing there in the middle of a packed club soaking it all in.”

Regardless of whether your allegiance lies in Warped Tour rosters or DIY venue circles, it's important to remember that music thrives on people being there, soaking in whatever music burns truest for them. How can we best ensure the music scene is inclusive for all? “If we are restricting one, then we are restricting everyone,” offers Gray. Be it in the realms of accessibility, show safety, or general accepting measures that bands, fans and venues alike need to take, a phenomenon that caters to so many from an emotional perspective should improve to do so at all levels. While we work together to think of more ways to do so, perhaps we should start at the center.

For Denius, motivation comes from a positive push. “I think what I benefit most from is that I'm meeting a lot of people and I'm giving them the hope that they've long been chasing after. I could feed off of that forever.”

Although words can't substitute for larger institutional changes, by starting at the source––after all, music would be a skeleton without its listeners––we can begin to work together to create a better place for everyone to become “superhero,” regardless of how or when their abilities came into being. This column will explore those origin stories and later triumphs. alt

Can you match these Pierce The Veil lyrics to the right...