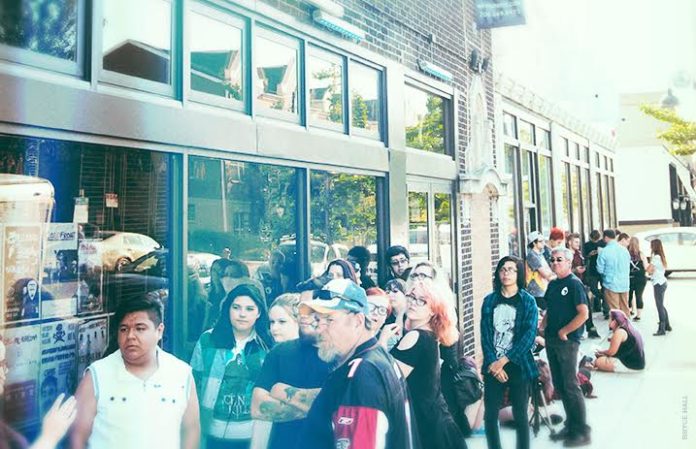 Take a look at nearly any major tour routing, and you’ll likely see a lot of the same familiar cities. However, often between those bigger cities are tons of smaller stops that go unnoticed. While bands compete for attention in saturated scenes, those of us working to build and sustain music communities in out-of-the-way places are used to getting passed over.

We don’t take it personally, though. We understand we don’t have the most national recognition, the biggest venues or the most well-renowned musical history. Hell, my own city (Fargo, North Dakota, metro population: 233,386) is better known for a movie (that doesn’t even take place here) than anything related to punk. The financial risks for touring bands playing small markets aren’t lost on us either; lower expected turnouts typically mean less money. In short, playing somewhere small and out of the way is a gamble.

But sometimes, they’re the best places you can play.

Will anyone actually come?

The first question bands are likely to ask en route to a smaller scene is whether anyone will know who they are or care about underground music, period. Both are legitimate concerns: This is especially the case for bands travelling through parts of the country they’re not totally familiar with.

Thanks to the internet, however, both of these problems are largely non-issues. Kids living in out-of-the-way places are far less culturally disconnected than they may have been 10 or 15 years ago. That means finding an audience for your band, even if you’re hours away from a major city, may be easier than you think. This is particularly true in college towns, which tend to absorb culture and spit out young creative talent, even in otherwise rural areas. These places often have successful venues, record stores and other necessary components to build small yet sustainable scenes.

By comparison, major cities offer no shortage of stuff to see and do. For bands, that can be a good thing. However, it can also mean more competition for people’s time and money. If your band is just starting out, that can mean your show ends up getting lost amongst every other basement show and main stage spectacle going on that night. Play in a smaller city, and your odds of finding an audience might actually be higher by virtue of having less competition and more of a spotlight. Find a cool town between two bigger cities, and it could mean the difference between having gas money to finish your tour, or playing to big, empty rooms in busy cities.

Small towns savor every show they get

This leads into the biggest upside small towns offer, both for fans, and for bands. Living somewhere bands always play can lead to fans becoming entitled. I can’t count how many times I’ve wanted to put my fist through my monitor after seeing someone complain because a tour isn’t coming within 50 feet of their apartment. When you’re used to watching the majority of tours skip your area completely, you learn to appreciate what you have. We don’t whine about bands skipping our cities because we never expected them to come in the first place. And we savor every show we do get.

That means when bands do come through, it’s a big goddamned deal. We tell our friends and we show up. We’re driven by urgency and thirst to keep our scene alive, because we’re persistently one venue closing or local band breakup away from losing what little we do have. If we want to do more than spend our weekends in all-night diners or WalMart parking lots, then we have to support bands that come through.

There is no, “I’ll catch them next time,” for us. If we don’t see a band the first time, they probably won’t bother coming back.

We don’t let that pressure get us down, though. We use it to fuel our enthusiasm. Even small rooms can feel huge when all 50 people in attendance are into your set. Phones will be put away, arms will be uncrossed and all attention will be on your band. This kind of closeness between the band and the audience is sometimes harder for bigger bands to achieve, especially in places where they just can’t reasonably play small venues.

If there’s one thing small towns do right, it’s hospitality

You’ll probably find that gratitude doesn’t end when the show does, either. Someone will almost certainly offer a place to stay or show you around their town if you ask. If you’re worried about being bored after you’ve packed your van, remember you’ll be in a place surrounded by people who know how to make their own fun. If there’s one thing small towns do right, it’s hospitality.

So, how do you make adding smaller stops to your tour routing work? One way is to pick small college towns in between major cities. This is certainly the case in Urbana-Champaign, Illinois (pop. 231,891). Home to the University of Illinois, it’s also the home base for Polyvinyl Records. While every band probably wants to play Chicago, it’s a perfect example of an in-between city. “That’s two and a half hours away,” says Skeletal Lightning label co-founder and Polyvinyl Records office assistant Sean Hermann, who is based out of the central Illinois metro area. “And just because the city is so much bigger, I think it’s assumed that more people will show up, bigger crowds or people will be more excited. But,one thing a lot of people don’t realize is even if the crowd’s maybe smaller, it doesn’t mean the people attending the shows or fans of the band aren’t as excited, if not more, since we don’t usually get bigger shows.”

Another way is to ask other bands and promoters if they know about any hidden gems on the road. This can lead to finding cool hole-in-the-wall spots with an advantage stamp of approval. Plus, you’ll make memories that probably couldn’t have happened anywhere else. “[The Swellers] had some random contacts in Madera, California, when we did our first tour, and we kind of became like local legends there for a few years,” says Braidedveins drummer and AP contributor Jonathan Diener, who himself is based out of Flint, Michigan (pop. 99,763). “So, every time we’d show up, it was this massive event, and that was way bigger than the cities for us.”

A third option is to play suburbs on the edge of major metro areas. While it might be tempting to book a show close to a hip neighborhood or downtown area, a good portion of your audience is likely going to have to drive to see you anyway (and again, you’re closer to other things that people can hit up instead of your show). That can make playing a handful of suburbs or nearby towns first a safer bet to build up a mobile audience since they’re usually used to driving some distance to shows, anyway. “If you play a few small towns around a city like that, when you finally play the city, you have like four towns’ worth of people showing up,” Diener says. “You don’t have to rely just on people who live in said city, because realistically, that’s not how touring works. Most people don’t live right by the venue; they’re coming from an hour or two away.”

However, we still haven’t addressed the core question: Why bother? While we’ve covered the practical upsides and downsides to going off the beaten path, this last point is more philosophical. (Bear with me for a minute here.) Punk rock has always been about accessibility. Like we established earlier, the internet has done a lot to break down barriers to finding music no matter where you live or who you are. However, without bands willing to take a chance on the smaller stops between bigger cities, a lot of kids simply just can’t see as many bands. Playing out of the way places is a means of bringing music to more people.

Do it right, and that effort won’t go unappreciated, either. Gas money is a necessity. So are merch sales. However, the connection that’s often possible between a band and an audience in a small venue, a place that doesn’t always get to appreciate such an event, is often something truly special.

“One of the biggest incentives is appreciation, and appreciation for the band and what they’re doing,” says Dan Nissen, co-founder of all-ages venue and record store Total Drag in Sioux Falls, South Dakota (pop. 164,676). “I’ve talked to countless bands that have come through that, in a bigger city, you’re always competing with other shows. It’s easier to see bands like that in bigger cities, like Minneapolis, for instance. But in a Sioux Falls … the people coming out to those shows are so excited that band’s even in their town, at all. It makes for a really good energy at all the shows.”

Still skeptical? Diener recalls one such band that applied this approach with a high level of success. “The Menzingers … used to play Flint house shows all the time, and now they play with humongous bands. It’s because they loved what they did, and they made friends with everyone and they connected. Even though they did the little small stuff for so long, eventually it worked, and all those people are lifelong fans now,” he says. “If [bands] know how to utilize small towns the proper way, that’s how they achieve their longevity.”

So, next time someone whines that you’re not hitting up their city for the fourth time in two months, think about looking somewhere else on the map. You just might stumble onto the next up-and-coming scene.