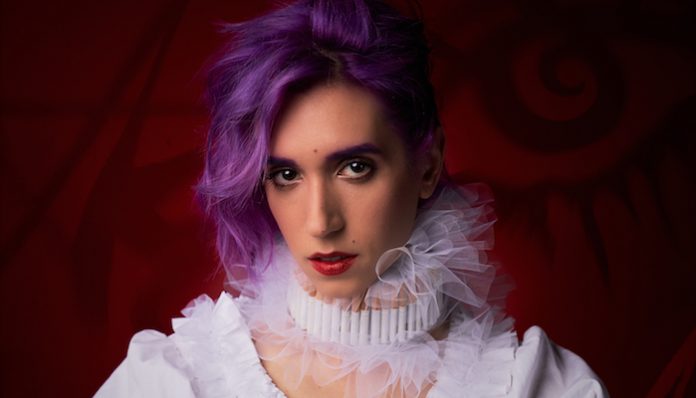 With pipes that would leave Lady Gaga in awe and dark creativity that would make the Used blush, Anastasia Elliot has teamed up with AltPress for the release of her premiere single, “Cigarettes & Gasoline.”

Drenched in an alluring softness that erupts into an extravagant chorus highlighting Elliot’s operatic vocal training, she makes it clear that she can carry any note with ease. From the haunting vocal arrangements down to the denim gown designed by Elliot in collaboration with Gabriella Meyer of Denimcratic, it’s hard not to lend your full attention to her. The grim universe she depicts through her music and visuals is unlike any other. She also recruited Dashboard Confessional’s Chris Carrabba to lend his whistling talents on the track’s chorus.

“It is important for me that people have the opportunity to interpret my work in a way that is meaningful to them,” Elliot shares. “There are truths and intents hidden in everything I create, but I think there is a beauty in letting the audience find their story in each song and video. With ‘Cigarettes & Gasoline,’ the imagery plays with the idea of the cyclical nature of a toxic relationship and the fine and fleeting line between passionate love and hate.”

“Cigarettes & Gasoline” explores love and passion between scorned lovers portrayed by Elliot and a series of mannequins. Repeatedly, Elliot allows herself to become consumed by their romance only for it to result in heartache and murder. While stabbing, drowning and burning her lover, she sings about how she loves “the way you look with blood on your back.” Elliot constructs a modern-day Romeo And Juliet narrative that, despite the passion shared between the star-crossed lovers, will inevitably end in tragedy.

Read more: Palaye Royale invite you to a masquerade in “Hang On To Yourself” video

Between her raw vocal range and the endless loss expressed in “Cigarettes & Gasoline,” Elliot’s debut release is nothing short of consuming and gut-wrenching.

Check out Elliot’s debut video and track below.