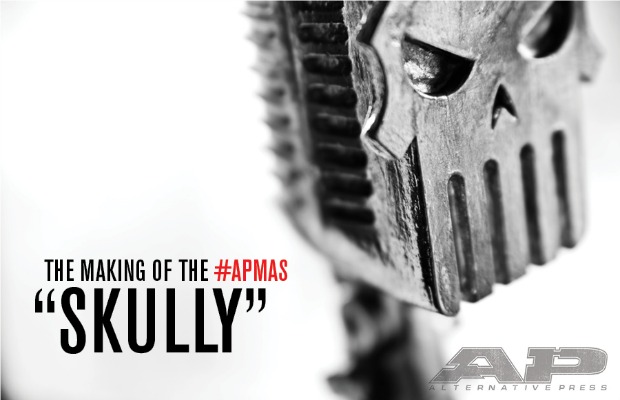 Can you believe the APMAs were a month ago? We're just now starting to recover over in the AP bungalow, after posting what amounted to something like 17 days' worth of video content. But one question we've been asked a whole bunch, by fans and music industry-types alike, is, “What's the deal with Skully?” Skully, for those who don't know, is the name we gave our APMAs trophy that was presented to all of our winners, from our Icon, Vanguard and Guitar Legend recipients Joan Jett, Slash and Billy Corgan all the way down to Breakthrough Band winners Crown The Empire.

Despite his incredibly busy schedule (he is responsible for designing our magazine too, y'know), we manager to get a few minutes of our art director Christopher Benton's time to discuss the genesis of Skully, and he in turn bent the ear of APMAs illustrator Jason Goad as well as Rich Sandomeno at Spragwerks, who was responsible for turning this crazy idea into a real-life, three-dimensional statue. Enjoy this behind-the-scenes look at how an award show creates its trophy, and expect to see more Skullys at the second annual APMAs!

Let me start by saying that after 20-plus years of designing and directing at AP, it just so happens we have designed next to nothing three-dimensonal. The closest we would get would be, say, a pop-up tent design for Vans Warped Tour or a magazine display. So designing an actual award for the APMAs was an exciting yet daunting task. When a project is new to you, it often takes you into one of the best parts of designing: collaborating with like-minded creative people.

The direction for the award was solidified at one of the earliest APMA meetings this past October. Founder Mike Shea had this ironic, corny, spike Mohawked skull in his office. At some point during the meeting, our newly hired producer Josh Bernstein picked it up and said, “Even this would be kind of cool for the award.” I thought it was an awful skull, but I thought it was a good start. For many art and identity pieces we do at AP, we often like to start with a recognized symbol (a skull, an angel, a punk, a guitar) and then see what different directions we can take it.

I always try to alter the piece to break away from the clichés these symbols are associated with. I think Bernstein's recent relationship with the very metal Golden Gods Awards may have intensified this for me, but my overall motivation was, “How can we take the idea of a skull award and do something different and cooler with it to avoid metal or punk clichés?” And oddl,y maybe, make it more fun, too.

After those early meetings, I did these quick sketches of ideas for both the award and the logo. I started exploring a sort of cyborg vibe. My motivation was, “How do I make a skull mean ‘music?’” I loved the idea that this was for bands, and I wanted the award to somehow be, or include, a tool, or tools, of their trade. I kept falling back to microphones and speakers, which were the obvious entry and exit points for any band's music. I was also obsessed with it having similar dimensions to a microphone so it could be held like one.

Then, like most visual elements that launch out of the AP art room, the next phase started with a ridiculous brainstorming session, which I love. I can't describe the tangents we get on in these quick idea sessions, but whatever we come up with is the root or heart of the piece, even if you'd maybe never know it by the final product. This session yielded a mood board full of the classic movie Metropolis, robot chicks, deconstructed sculptures, polygonal styles, aliens, plenty of H.G. Giger skulls and old-timey microphones, which would help shape the look and feel of the award and the award artwork in general.

Now with these rough sketches and ideas, I thought it was smart to enlist the help of an illustrator to really develop this and help give it some life. I had worked with Jason Goad on illustrations for the Warped Tour program and designs for the 2011 AP Fall Tour. For the identity, we ended up with a hot cyborg chick we named Decibelle. Goad and I always could really get each other going creatively and collaborate well. I also knew Jason did some stuff for Anarchy eyewear and Hot Wheels, and he told me about having to do all-around sketches for these products, which I figured would come in handy when presenting to a sculpture. He seemed like the guy, and I knew from working with him in the past that this was way up his alley!

I was already in talks With Rich Sandomeno at Spragwerks in LA. He had done the Golden God award, and Bernstein couldn’t recommend him highly enough. After checking Spragwerks out (which is just Rich himself), I found that all his work, from his jewelry to metal art pieces, was just rock-n-raw! I knew it would be perfect for whatever we would come up with, and so once Jason had his sketches and turnarounds, we were both excited to see where he’d take it into the third dimension!
— Christopher Benton, AP creative director