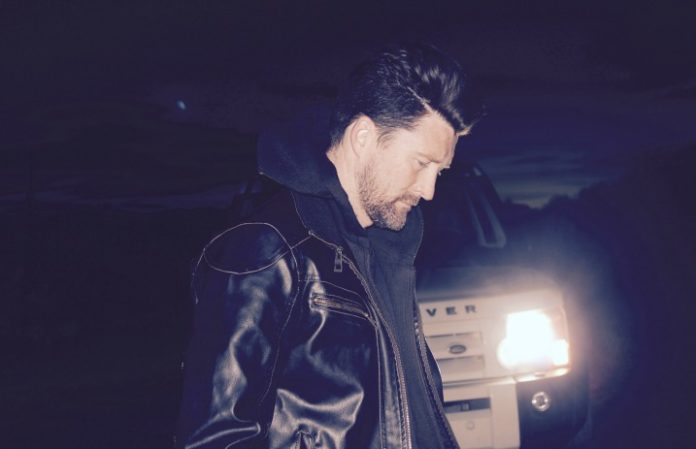 It's been a whirlwind few years for the former Anberlin frontman Stephen Christian, who is not only continuing music with Anchor & Braille but also taking big sonic steps in a different direction. Worn out by one of the grandest exits we've seen from a band, Christian soon endured his post-band plans coming undone. Through a career detour, family resettlement and the reimagining of his solo sound, his resilience was felt during our phone conversation. AP spoke with Christian on the eve of his third album’s release, Songs For The Late Night Drive Home, and found him looking forward to the future while appreciating his past.

Christian also teamed up with AltPress to bring you the full stream Songs For The Late Night Drive Home. Take a listen below, and be sure to let us know what you think in the comments.

*This is part one of our two part Q&A. Click here for Christian's reflection on Anberlin.

I work at Calvary Albuquerque [in New Mexico]. I am the worship director there. I basically work at a church, that's my five day a week job. Then, on the side I'm still doing Anchor & Braille, I still write for bands, I have a podcast called the Art Collective. Between that and a family, life never has a dull moment. So that's positive. Even though it's a routine, it's not like a 9-5 job. The church is more interested in me songwriting for them, they want to make this a community of musicians. I concentrate on putting together songwriting events, stuff like that, so it's really interesting, it's a lot of fun, it's good. I think I'll be here for a while.

Some of that role overlaps from what you learned as a frontman, it sounds like.

Yeah, just kind of figuring out what's next and really working hard on the songwriting, musicianship and cultivating talent. It really does have a crossover in my current world in a lot of ways.

Every time you're about to put out new music, does it feel like the first time?

I think it became mundane. You gotta think that I put out nine records in 12 years. It got to the point where it was like cool, let's work really hard in the studio, let's make it the best we possibly can, but it wasn't like the first time where we're nervous and all together. But now that I'm out of the industry, to put this record out, it did feel different. It really did. I guess for some reason I just thought that would never happen again—that I wouldn't get excited for another record or get the opportunity to do interviews. I don't know why. I just kind of figured like 'Oh, I'm out. I'm just out.' So this is different, because it's so unexpected to be putting something out and doing the whole routine again.

When and where did you write and record the new Anchor & Braille album?

It started about a year ago now. It was in Nashville, Tennessee. I was still living there. A lot of the stuff had been written when Anberlin was coming to a close. It wasn't a concentration of mine, simply because I wanted to focus on those last few months, so when I got back to Nashville, it was a process of working with the producer Ryan Bernal who helped me co-write a lot of the songs. We would sit down and go through different sounds, tempos, rhythms, beats, like that to hone in a particular sound I was going for. It was one of those projects where I was doing my thing, he was doing his thing, it would be like 10 at night and he'd ask 'Are you up?' And we'd go hang out. Or at 9 a.m. It was so sporadic. It was never, 'Okay, for the next three weeks we're going to sit here and do this project.' And I kind of like that, because in the studio you can get lost and just do it for the sake of time, as opposed to take your time on a song. Sit with it for a week and a half before you know you have to record it.

So the two of you created these soundscapes we're hearing?

Absolutely, one whole day, we spent about four to five hours sitting in front of Ableton, Logic, Reason, just all these programs that might emit a different kind of sound. That's where name of one of the songs, “Detroit Stab,” got its name, because I liked that sound effect. I was like 'Man, I want this record to sound like Detroit Stab.' It was just an ongoing joke so I was like 'I gotta name a song that!' We definitely concentrated on exactly what you said, those kind of define the record, just the sound and the beat.

You titled the album Songs For The Late Night Drive Home. It seems pretty self-explanatory on when best listened to, but why did you go with that and when did the title come to you?

Okay, for a couple reasons. First off, one of my favorite record titles, if not my favorite, is Pete Yorn's Musicforthemorningafter. I love that. It was kind of self-explanatory. I like the fact that this record, there's not any massive chorus, it's not like a lull in the song and suddenly you have these high-highs. I purposely tried to make this as hypnotic as possible. I just didn't want one song to rise. Ryan said, 'What about an acoustic song to tie the old records into the new?' I don't want the listener to be drawn out. I want you to be able to put this on, and nobody's paying attention. It's like an instrumental record. I guess, yeah. Background music—for a movie. Or for, I guess, real life.

“Watch You Burn” is a pretty dominant opener that sets the tone for the record encompassing dance/electronic/r&b. I also heard female guest vocals on there.

That's a friend from Nashville. She's got a great project going on there, it's also got an electronic vibe. I wanted to add it in. I enjoy the fact that when I was in Lakeland, Florida, all the musicians on the first A&B record, those were all local Central Florida artists like Copeland. So I try to use local people. Same with the second record with the Civil Twilight guys. So now that I'm in Albuquerque, if I ever come up with another A&B record, I hope that I find like-minded individuals and artists that I'll be able to incorporate the local culture into the record.

You maintained a lyrics meaning blog for Anberlin, will you do that for this record?

I don't think so. I kind of like this being more hypnotic. Even in one of the songs I just released, “Lower East Side,” the beginning line is “I designed it like this/Where you don't understand me anyway.” I appreciate what Thom Yorke said once that he uses his voice like an instrument as a part of Radiohead as opposed to writing a really catchy pop hook and draw you all in. I enjoy that. I don't think I need to put the lyrics up for this one.

Some people were upset when I put up the Anberlin meanings. I don't understand because you can choose not to read them. You don't have to go look at them now. But they were kind of like 'You ruined it for us, because we had made up our own stories in our head.' That's cool, but like, don't read it then?

You've said you enjoy the freedom of industry expectations on this project. Do you desire to play out at all?

I don't know. I don't know, man. I get anxiety every time I see a bus now.

You always had Anberlin as your priority. Now, with that gone, what are you expecting in 2016?

I don't know. It's one of those things that's exciting and fun. We talked about how I love putting out new records. This one feels different. It's not the same old, same old. But, there's only so much I can do. For me, I have an adverse reaction to touring at the moment. So that right there will kill a lot of the momentum this record could have had.

I don't necessarily agree with that. I think you may be overshooting just because it's something great for people to listen to by themselves in their homes or in their car. It's the kind of music that can take them away from a show full of people.

Yeah, you're right. I don't know. In 2016, the way that people discover music is Spotify or iTunes.

And that's a real personal thing.

Yeah, but that's not how an artist makes money. I'm probably just programmed that if I don't tour, I don't sell, you know? I think that's just my prior life kicking in. It's a different year. For me, if you want to know what would 'make it' for this record, would probably be getting a movie soundtrack or a commercial. I know how that sounds, but it's as far as this record's going to go. It's not getting pushed to radio. I'm not going to tour. The biggest this could possibly go is a car commercial.

That would be a new, unique opportunity for you.

Absolutely! That'd be so much fun.