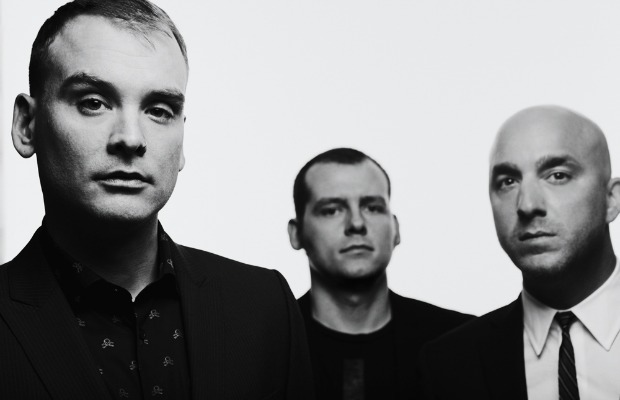 Chicago has always been known for producing quality bands of all genres, but when Alkaline Trio made Goddamnit in 1998, there were no other bands who sounded like them. Smoking Popes—a big influence on bassist Dan Andriano—broke up earlier in the year, and the scene’s musical landscape was dominated by discordant math-rock bands like Shellac and U.S. Maple, as well as in-your-face punk like Apocalypse Hoboken and 88 Fingers Louie (who original Trio drummer Glenn Porter did time with). No one even thought about mixing open-diary lyricism with three chords and a distortion pedal until Matt Skiba, a 22-year-old bike messenger sick of his day job, decided to play what was in his devil-tailed heart, writing missives on everything from friendship to suicide—and, of course, his hatred for the police.

Completely recorded, mixed and mastered by Matt Allison in nine days for only $900, Goddamnit is an album literally made backwards: Skiba’s throat was ailing him early on, so Andriano laid down his backing vocals first, which Skiba then had to match his lead vocals to, often with gloriously dissonant results (“My Little Needle”). Both singers made the incredibly gutsy move of including an acoustic track each, with Skiba’s “Sorry About That” being more nostalgic and Andriano’s “Enjoy Your Day” more tragic. Even gutsier is the disc’s sequencing: The first time Andriano sings lead is the aforementioned lover’s lament, a shock to anyone who spent the first five tracks enamored with Skiba’s blood, sex and booze-riddled lyrics and a guitar cranked to 11. It’s unexpected twists like these which make Goddamnit work so well on all levels. The cherry on top? Some truly brilliant stickwork courtesy of Porter that’s appropriately breakneck for the genre yet laced with off-time subtleties (“Clavicle,” “Message From Kathlene”). Everything on Goddamnit sounds like a mistake—and that’s why none of it is.

Alkaline Trio hold an unwavering second place as my favorite band of all time, and I’ve seen them live more times than I can remember. Because of that, I know that most Trio fans are going to want my neck because of this choice. There’s a certain defiant attitude toward Crimson’s commercial success that taints perspectives. The sometimes orchestral (some say “overproduced”), dark tones of the album follow logically on what the Trio had begun building with Good Mourning. Song-wise, Crimson is more structurally sound and is no less sincere or poetic than previous efforts. So why do you guys give it so much shit? I won’t argue for Crimson’s validity by invalidating fan-favorite Goddamnit or any of the band’s previous albums. I would like to point out what makes the relationship between them awesome: the progression. Anyone can come from four-chord punk songs. It’s a great place to start, and those songs are excellent, but I’d venture a guess that most artists would go mad with boredom (and run out of new ideas) if they forced themselves to stay in that same place for more than a decade. Crimson feels like Alkaline Trio’s first significant move toward bigger things. It feels brave, and that makes it not only their most accessible, but also their strongest album.

Perhaps it’s the lack of familiar Trio tropes (substance abuse, heartache) that turns off fans. Where the band may have before looked inward for inspiration, they were more influenced by the (primarily religious) flaws of the world around them on Crimson, sympathizing with and pleading for the West Memphis Three with “Prevent This Tragedy” and attempting to go inside the mind of Manson cult follower Susan Atkins in “Sadie” (though that wasn’t their first foray into the mind of a killer nor external criticism). Maybe there’s “too much piano”; maybe there are “too many slow songs”; maybe “Burn” and “Time To Waste” are too epic for you; maybe “The Poison” and “Mercy Me” are too straightforwardly rock for your tastes. I don’t know what the beef is, honestly, because all of those aforementioned ways they stepped outside their comfort zone for Crimson just made me respect Alkaline Trio more.

Sure, we can talk all day about how good Alkaline Trio were in their early years. Or, we can accept that fact that things are bound to change over the course of a band’s 16-year existence and talk about all the good that came out of that change. Case in point: Alkaline Trio’s 2008 full-length, Agony & Irony. From radio-ready pop-rock (“Calling All Skeletons”) and windows-down, sing-along choruses (“Help Me”) to absolutely flawless punk (“I Found Away,” “Lost And Rendered”) and a worthwhile softer side (“Over And Out”), Agony & Irony finds the band at not only the height of their game, but at their most versatile as well.

Perhaps the most truthful lyric throughout the whole record comes in the first line of “Into The Night,” when Matt Skiba croons, “We'll never know which way this road is gonna turn.” The members of Alkaline Trio have essentially placed themselves in a musical pigeonhole; no matter what type of album they write, they’ll virtually never be able to appease their entire fanbase—and that is why Agony & Irony is the best record the band have to offer. It takes bits and pieces from every aspect of the band that fans have grown to love over the years, and places them into a nice, 11-track package. If you’ve written off the effort in the past, give it a second chance. You may find yourself questioning everything you’ve ever thought about the band.