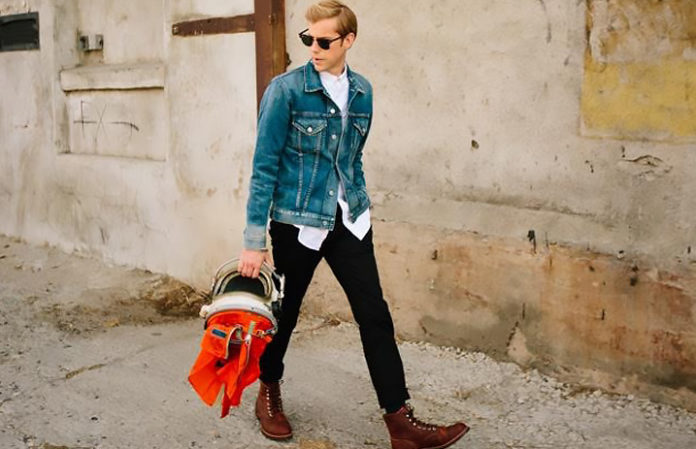 Nearly 20 years(!) after Something Corporate coalesced in Orange County, California, Andrew McMahon is on one of his biggest musical upswings yet. 2014's Gold-selling “Cecilia And The Satellite,” a song about his daughter, buoyed the self-titled debut album from his latest project, Andrew McMahon In The Wilderness, and set the stage for the Feb. 10 release of the group's second effort, Zombies On Broadway, which itself has already launched the top 15 alternative radio hit “Fire Escape.”

Recorded in New York—but finished in McMahon's beloved home state of California—Zombies On Broadway is a contemporary-sounding pop-rock record with plenty of heart, soul and (of course) piano. “I feel like in a lot of ways it's the most focused work I've done in a long time,” he says. “I'm excited to get it out there. The beauty of getting to make these things is you get to challenge yourself, and challenge your fans, and make these sounds. I'm excited to see where it lands for people.”

What may people expect from Andrew McMahon In The Wilderness on their forthcoming Zombies In America headlining tour, which kicks off March 12? “I like to play the hits,” McMahon says. “I think we'll cherry-pick the best of the old days and mix it up with these last two records and a really exciting production.” McMahon chatted with AP about Wilderness Two, navigating dualities and always being sure to come back to Earth when things become frayed at the edges.

In the album's bio, you mentioned making this record in New York tested you. In what specific ways?
Andrew McMahon: My relationship with the city is a sordid one. In a lot of ways, it goes back to Jack's Mannequin. When I finished Everything In Transit, I was gonna bail on California and go to [New York City] and make a record there. That was always gonna be the plan for the second Jack's Mannequin [record]. And then, as you can imagine, being diagnosed in the city—and then having everything play out the way it did—I wasn't really in a position of strength at all to go back and make good on that initial inspiration.

The fact that it was in New York where I found out that I was sick…It became this place where every time I went back, I freaked out a little bit—or a lot, depending on the trip and the duration. In some ways, there was was this lineage between Transit and the first Wilderness record, both personally and even in some of the songwriting. All the sudden it was like, “Okay, I'm on a footing to make good on that initial idea. I'm gonna go make this record in New York.”

It started really strong. “Fire Escape” was the thing that led me to believe this was the place to do it. And truthfully, I'm a man with large appetites, and the bars staying open until 4 a.m., when all is said and done, isn't always the best thing for me. And it got the best of me, by the end. [Laughs.] I had to come home and finish the record back in California, I guess as appropriate as that tends to be for me—to make my way home at the end of an album.

No wonder the last song on the record, “Birthday Song,” is so much like a Post-It note to yourself—like, “Hello, this is not me 10 years ago. I have responsibilities.” And it's hard sometimes to remember that.
Yeah, it is. And as amazing as these past couple years have been—seeing the success of the first [Andrew McMahon In The Wilderness] record, and having my first official hit song and a Gold record and all these things that went along with it—I worked so much harder than I've worked, not only in years, but seemingly in my whole career. I'm not here to complain—it's been such a great run, and I'm so happy with the way things turned out. But the pressure that I put on myself to get this [new record] wrapped up in a certain period of time had consequences. It makes its way into the album, for sure. [Laughs.]

When you returned to California to finish the album, what new perspectives did you bring with you?
Well, as hard as it is for me to say, I've had a relationship with the lifestyle that has ebbed and flowed as far as my capacity for the late night. [Laughs.] And I was under the impression I had it fairly well under control, and it spun out pretty hard on me towards the end of this album, and towards the end of the touring on this cycle. I had to take ownership of that, and come back and pull that side of my life in check. Luckily, I was able to; I was in a position to get my hands around it and move forward. But that was a big realization for me: That I'm not invincible, try as I may over all these years to prove otherwise. [Laughs.]

Musically, was there anything specific you wanted to do differently this time around?
Having spent so much time in the studio on the first Wilderness record—and really getting to a place with my songwriting, and with writing with other people in the room—my biggest goal was [to] write the best song and [not] worry about fitting that production into a certain aesthetic or mold. With the first record, I was so hell-bent on, “This record's not gonna have guitars on it, it's gonna be this very specific thing,” because I wanted to establish a very specific kind of a sound.

If you look at Wilderness One as building the pieces sonically to try and create a unified vision, I think this record gave me the chance to build upon that, but also grow it. In that sense, I made a point to let things into the palette, into the landscape, that made it possible to see where there was some growth and some shifts. There's definitely a lot more of a presence of guitar on this record; there's certainly some adventurous departures and things [Laughs.] That made it fun to make the record, and made it fun to experiment in the studio.

What was the most fun thing for you as you explored all different sounds and production?
I think it was just the traveling [I did] for the record. I bounced around quite a bit before settling on New York as a home for the production. The writing—like anything, when you're connecting to your subconscious and you're getting to those words for the first time, that's always for me when I have the most fun. It's just like, “Oh yeah, that's what's inside my head. Let's get that down, and it get it down quickly.” Those trips were a big part of the record for me.

Going out of town is so inspiring sometimes, too. I find when I'm in another city, I'm inspired by different things.
I think I've always tried to take a very literary approach to how I write songs. Certainly when you have a journal or notebook packed with visuals and places and interesting people that you meet—that you can then marry to these broader concepts of what you're going through in your personal life—it has a way of bringing a listener in. The story is more than just what you're feeling inside, but it's what you're experiencing and seeing along the way, and how you unpack those emotions against the backdrops that you choose to tell the stories against.

You've employed space metaphors throughout your career, and on this record, as well. How has that symbolism evolved for you, and what does it mean to you in relation to this set of songs in this record?
If you look at that album cover, you can kind of get a sense of what it means to me. [Laughs.] It's made its way through my career, because I think I'm a person that has always felt a little out of place on Earth, and not in a way that I ask for any sympathy on. It's just as much a blessing as it can be a curse. On this record, I likened it to what can sometimes in my life seem like a little bit of a…Whether it's a double life or a personality that lands on two sides of the same coin, I think a part of me has always had one half of me in outer space and the other half on the ground. A lot of these songs are in some sense a reconciliation of those things.

It's that duality again.
On my best days, I'm both of those people at the same time. And on my worst days, I favor one side more than the other, and it leads to this pendulum overreaction to find some place in the middle. I don't think that's different than it's ever been, but I think certainly when you get busier and when there's a lot more on the line—at least in my case—it becomes harder to strike that balance, and you get these sort of extremes that you're constantly trying to balance against each other. And I think that's why that album cover made so much sense to me when it showed up in my mailbox. I was like, “Yep, that says it. Let's go with that.” [Laughs.]

Again, I don't want to paint the wrong picture: I'm not some dude sitting in a bedroom crying somewhere. I'm a high-functioning individual that, just as a result of taking on a lot sometimes, you have to figure out where home is, and make sure you land there.

You overschedule yourself, you get frayed at the edges.
Yeah, you know. It's the beauty of a life that is lived both well and hard at the same time. alt