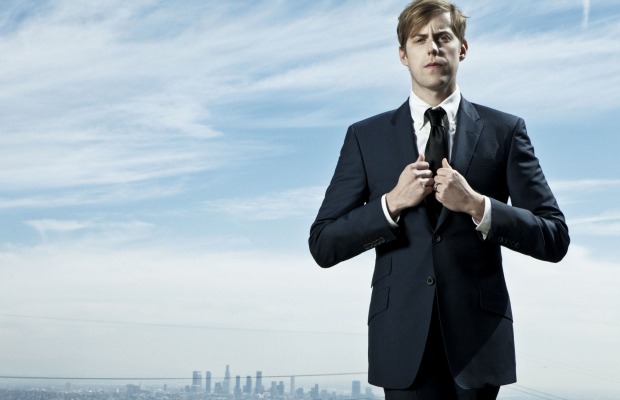 On Oct. 4, Jack’s Mannequin are releasing their third album, People And Things. (Pre-order the album here.) Although frontman Andrew McMahon is in a good headspace these days, the album-recording-process wasn’t without its bumps: In June 2010, McMahon actually scrapped the music he had been working on and started over. In early August, McMahon chatted with AP about this and other topics—such as how People And Things was influenced by both the Something Corporate reboot and writing sessions with pals such as Relient K’s Matt Thiessen. You can find some of AP's interview below–and the rest in issue #280, which is in stores Oct. 1.

People And Things comes three years after The Glass Passenger, which in turn came three years after Everything In Transit. I’m guessing this three-year gap was a bit less turbulent.
Yeah, it was definitely a lot less turbulent. It was a process, though—I would be lying [if I said] it wasn’t a lot of work. It was the first time I had ever actually recorded a good amount of songs with the intention of putting them out and kind of scrapped it and started over. That was kind of new for me. But it was a fun process; we worked hard, we worked a lot, there was a lot of songs written, a lot of recording. But at the end of the day, it was a lot less tumultuous than Passenger.

That’s daunting, scrapping everything and starting over. Why did you decide to do that?
Because it wasn’t right. At the point I decided to do it, it was actually a lot more empowering than daunting. I had gone through this whole process of recording a bunch of songs, and I really loved a lot of the songs…It was an experiment. I was at a place where for the first time, I wasn’t working with Jim Wirt, and we had done all of our records together. I think it was kind of to be expected that there might be some false starts, just because I was a little bit out of my element. [But] that was what I really wanted—I wanted this record to be a little bit out of my element. I’ve been recording in a similar scenario for almost 10 years, and it was like, “Let’s try to and do something different.” It wasn’t like I had been in the studio for a year recording. It was kind of on and off throughout the touring of Passenger—I would sneak in, do a song here, do a song there.

And the songs were good, but [when they] started coming together, it just felt—they didn’t feel like me or something. I don’t know how else to explain it. So I went on a little sojourn across the country from East to West this time, and while I was out there, I made the realization that it’s okay to start over. I came to the conclusion, “We’re a pretty good band. Let’s get everybody into the room together, and we’ll learn these songs like I used to back in the day when I was in high school in band practice.” So, we did that.

I came home right around the beginning of July from that trip, and I sat down with the guys at a little bar in Silverlake and said, “Hey, what do you think about going out, renting a place and kind of digging into these tunes together?” And they said, “Yeah, let’s do it.” So that kind of starting the clock ticking around. Then we went out, did some dates—I think in September or so we got into the studio and [we] got into a house out in the desert and we started learning the songs.

What was the biggest difference making an album with your Jack’s bandmates as opposed to working in the studio with Something Corporate?
To some extent, the early Jack’s records were kind of an extension of the Something Corporate process. Also,, this process was sort of a marriage of both processes. With the Jack stuff, I would go in, play the piano and sing, and then we’d build the track around that. With the Something Corporate stuff, we would learn the songs, but ultimately we would go in and record similarly; we did the drums first and break everything down. We never really tracked live with Something Corporate. But we did do the band practice element, which was similar to what we did on this one. We kind of went one step further with this record—we were down to a three-man band, so Bobby [Anderson] played bass for most of the live tracking. We would just spend a day on a song, track live—bass, piano and drums—and then kind of do the overdubs after that. So, it was a lot different. It was different not only from Something Corporate recording, but different from Jack’s recordings too. It was kind of a whole new thing.

This will be what, my fifth record? [Laughs.] Fifth full-length, at least. You can do things the same and repeat yourself, or you can try and grow and stretch and become a better musician, and learn how to self-edit and arrange yourself in a practice environment. I thought, “This was the time to do it.” We had been playing together as a band for longer than Something Corporate had played together, on the road at least. In that sense, it was like, “Okay, this is a good time to run this experiment.” And it was a lot of fun.

When I first listened to the record, it was surprising to me that the piano isn’t in the forefront of a lot of the songs. When in the recording process did you realize that in some of these songs, you were going to minimize that?
Well, you know—it was sort of, not to say my intention from the beginning, but I think a lot of what I wanted to do on this record was approach it from a production standpoint and not from a “me, me, me” standpoint. I wanted to make a sound that felt authentic, real and that was really true to each song. And I think I sort of found on these songs that the piano, while it plays a huge role, doesn’t always have to be this big. I kind of wanted to experiment with digging deeper into some of the other instrumentation and building songs from that perspective, rather than from the perspective of, “Hey I’m the piano-playing lead singer.”

You get pigeonholed into that. That’s the easy journalism hook, you know?
There’s that element—and frankly, [when I started] doing this, there weren’t a lot of people doing it. There are a lot more people doing it now, and some of that doesn’t sound exciting to me anymore. I wanted to try again and explore in a little bit more of an egalitarian way what the band sounds like and “what’s the right arrangement for this section,” not “what’s the right arrangement for my ego.”