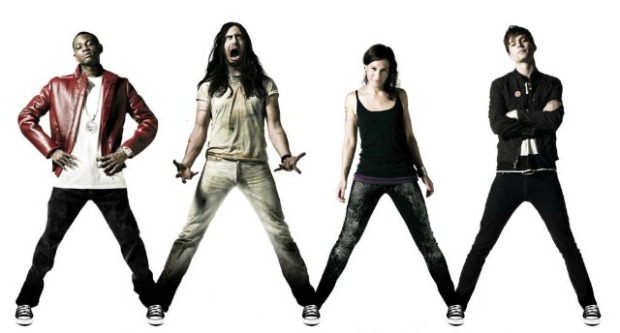 In the past, Converse’s “Three Artists. One Song” campaign has lead to collaborations between Kid Cudi, Best Coast and Vampire Weekend's Rostam Batmanglij (“All Summer”) and Pharrell, Santigold and the Strokes’ Julian Casablancas (“My Drive Thru”). Add to that esteemed list the just-premiered “I’m A Goner,” which is a cooperative effort between Matt & Kim, Soulja Boy and Andrew W.K. “I’m A Goner” can be downloaded for free right here starting today. (More info is also available at converse.com/music.) So how did this come about? ANDREW W.K. fills in the blanks with SCOTT HEISEL, while giving a status report on the rest of his current musical endeavors.

What was your involvement in the writing of “I’m A Goner”?
This is a song that Matt & Kim have been working on for, I think Matt said, at least a couple months; [they] invited me and Soulja Boy to sing on portions of the song. So they have our verses make appearances, but I definitely give credit to Matt & Kim for the songwriting.

So what would you say you brought to the songwriting process specifically?
I sang my part where I wrote the words, but [for] the words I used, I stayed with the “I’m A Goner” theme. One thing I really like about the song, I’m hoping people notice when they listen to it, is that every section—even when it’s what we might call a verse or a bridge or a pre-chorus or a post-chorus—they all have melodies or rhythms that make them strong enough to be a part unto themselves. What I really like about the structure of this song is, it is a bit unusual in that way. So I don’t know if I should call my section that I wrote a verse, or if it’s a bridge or just an appearance; it’s a unique song in that way. But I’m very happy with what I contributed. Matt & Kim were also very open-minded when it came to making good judgments about the mixing and various approaches to the sound of the song. But again, they really had the song written, so I will give credit where credit is due.

So were all four of you in the studio together at the same time, or was it kind of rotating in and out?
It was both. Matt & Kim had been working on the song on their own for a while and Soulja Boy came in—well actually, I believe he sent his first attempt at verses from his studio. I think he was in Miami at the time he recorded his parts, and then he came into New York and did more verses. Then I worked several days as well in New York in the Converse studio there. Then we all filmed the video together around the same time the next day.

What’s the theme of the video? Is it a performance clip, or is there a storyline to it?
There’s a storyline of sorts. I don’t know how much of it I’m allowed to tell. But it’s a concept that Matt & Kim had come up with and Soulja Boy and myself have moments to make an appearance. I think [it] turned out really cool, from what I’ve seen.

What was the biggest challenge making this video?
The main difficulty with this one was that it was very hot during the filming. We were in an abandoned hospital that’s really a real hospital. It’s actually a quite modern hospital; it’s just abandoned. It looks like it was built or refurbished within the last two years, so it was very strange to be in this empty, very contemporary hospital. I imagine this location is used quite frequently for movies and TV in New Jersey. But the problem was we were on the fifth floor on a very warm day where it was in the 90s and there were no fans, no formal ventilation system and no air conditioning in the building. And the only problem with that—normally, for me, I’m usually very sweaty, I’m sweaty right now as I speak to you, but most of my videos I’m very usually sweaty and filthy and that’s all fine, it works for me. But in this video, due to the nature of the theme, I was supposed to be dead at the beginning of the video but I’m dripping with sweat. It was like I was standing under a shower. So that was the only really challenging part was to try to appear dead and your body is pumping out fluids. Maybe, for all I know, when you die your body expels all your fluids and maybe even your urine and diarrhea through your pores.

That’s entirely possible; I’ve never seen a dead body up close so I couldn’t confirm that.
I think I looked pretty dead despite the sweat.

I think a lot of fans have been wondering what’s going on with the new Andrew W.K. record. It’s been talked about since you were on Warped Tour last year that there would be a new, full-band record coming out and there really hasn’t been much of a substantial update. Is there anything you can divulge on that?
Sure, yes. I’m recording it actually right now. I’m in Los Angeles, arrived today for another round of recording. I’ve been recording and working on the album for about the last eight months. I don’t know sometimes what to update [people] on. I’m continuing to work on it, and as long as we’re making forward progress, that to me is really the best we can do. As soon as it’s done, I’ll put it out. So for the rest of summer, I will continue recording. The difficulty has been clearing out other aspects [of my life]. I’ve never really been someone who’s good at recording while on the road. I’ve met people that set up recording studios in their bus and record albums during their touring, but I’ve not had as much luck with that. I just feel like I kind of tend to focus all the energy on that—so while we’ve been doing, let’s say doing Warped Tour, I wasn’t able to really record then. We did another full tour in October and then another full tour in January with the whole band, which has been great. But I’ve had to really say no to tours now and try to turn down shows, which has been really hard for me. It’s not usually in my nature to say no to things, I usually want to do and follow through on opportunities that find their way into us. But in order to make the time to finish the album, we definitely have to continue to carve out that space.

A few years ago, you had mentioned that you had a number of albums in the works coming out. There was talk of an album called The Carrier and another called Young Lord, and it sounded like those were at least at some point written, if not recorded. What’s the status on those projects? Will we ever see the light of day on those?
Yes, absolutely and thanks for asking about them and your memory of them. Since there’s no real rush for me to put those albums out—there’s a lot of things I want to do. Maybe the one lesson I learned is sometimes it’s better to just do what you’re going to do rather than tell people you’re going to do it, because then there’s this level of expectation—which is great, because you hope there is a desire or some kind of small demand or anything from people out there. But I learned it’s better to just do it rather than tell people in advance, because then maybe they get anxious or wondering or want an exact time frame, things like that—which I understand. At this point, I’ll put out those other albums after this other one; this other one is a real rock ’n’ roll album. Then all those other ones that I’m working on that are a bit harder to define, I’d rather put them out after that.

When you say “harder to define,” what does that mean? Experimental music?
Well, I don’t think of them as experiments so much. They’re just not rock in terms of guitar, bass and drums.

Can you point to somewhere as a guidepost to where it’s going to sound sonically?
Not really, not in a way that I would find to be helpful.