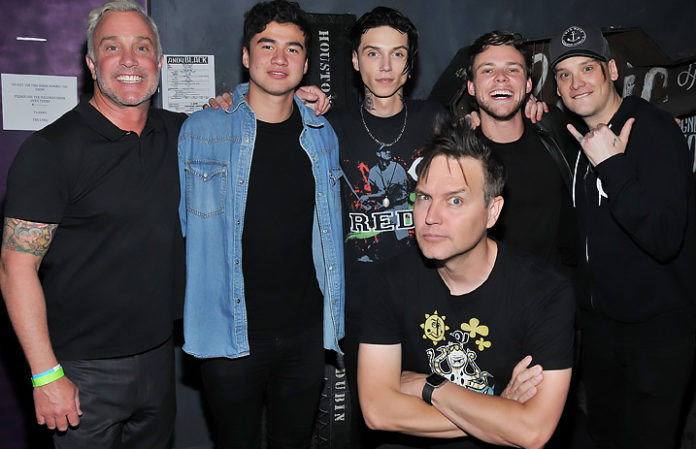 As Andy Biersack mentioned from the stage, he’ll never have another “first show” again.

On Tuesday night, a decade after the formation of Black Veil Brides, Biersack made his live debut as Andy Black.

Fans who preordered The Shadow Side, the debut Andy Black album out this Friday, as well as a number of friends and associates saw the singer lead his new solo project through a short but electrifying set. The show went down at LA’s intimate Lyric Theatre, a venue less than a tenth the size of The Wiltern, where Black Veil Brides filmed the Alive And Burning concert DVD on the Black Mass Tour just 18 months ago.

It’s been a busy year and a half since. Biersack finished The Shadow Side with producer John Feldmann (Good Charlotte, Blink-182, Sleeping With Sirens) and a number of collaborators (including Gerard Way and Patrick Stump), shot a video for “We Don’t Have To Dance,” began work on the BVB’s fifth album and married his longtime sweetheart, singer Juliet Simms. The boisterously supportive crowd started chanting “Juliet! Juliet!” when they noticed the new bride near the stage.

Backed by Josh J. on guitar, keyboards and vocals and Beaux Evans on drums and vocals, a bold and classy “Andy Black” backdrop and a tasteful light show, Biersack came dressed to impress in black slacks, a white button-up with the sleeves rolled up, black vest, suspenders and fingerless biker gloves, augmenting his striking visage in a manner befitting the more elegant but no-less vibrant persona of the BVB leader. Andy and the band kicked off with “Stay Alive” from the new album before launching into the instantly memorable “Ribcage.”

Biersack’s command of the stage was impressive, with the arena rock confidence and charming charisma he’s honed with BVB in full effect, balanced by more than a few nods to the intimate setting and unique experience for both band and fans.

His fingerless gloves couldn’t have “fit” any better than when they tore into a cover of Billy Idol’s classic “Dancing With Myself,” which led into The Shadow Side song “Louder Than Your Love.” Biersack expressed some heartfelt appreciation for Alkaline Trio, whose Matt Skiba was in the crowd, before a bombastic rendition of the dark punk band’s “Time To Waste.” “They Don’t Need To Understand,” the first Andy Black song (released in May, 2014) made its live debut as well, before the set closing “We Don’t Have To Dance,” which elicited the loudest sing-a-long of the night.

Andy Black will play another intimate show in New York City on Thursday, May 5, at the Knitting Factory. Fans who preorder the album here will have the opportunity to reserve two free tickets to the show.

3. “Dancing With Myself” (Billy Idol cover)

6. “They Don’t Need to Understand”