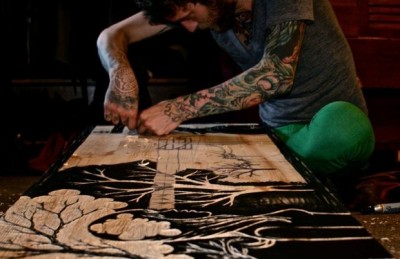 In the wake of the announcement of his departure from the Academy Is…, drummer Andy “the Butcher” Mrotek says the last few days have been emotional but also a relief. AP caught up with him in California, as he prepares to move back to Milwaukee to fill out the Animal Upstairs’ lineup with friends from home. He filled us in on what’s next, what he learned from his time in the Academy Is… and why he’ll always respect his former bandmates.

When did you first start feeling like you might leave the band? Was it something you and Michael Guy Chislett decided together?

We did, actually.At the end of the KISS tour, Chislett actually left. I had left, too, to some extent, but his was very much physical and it was solid that he wasn’t coming back. The tensions were kind of high because I think the guys knew about both of us leaving, but especially him. I guess he had more reason to. He is such a good guitarist and has done tours with many people, part of me thinks that maybe they felt that that was a bit more of a reality compared to mine. Maybe I had a bit more emotional attachment, where I had a lot of different reasons to stay, to leave—all these things were going through my head. But that was a very emotional period and since then, those emotions have died down. The fire or whatever anger I had definitely is not there anymore. Several months ago, I finally mustered up a really long e-mail to the guys, restating the fact that I’m leaving and I need to utilize my talents and efforts and all these things. They wrote me back saying they understand and everything, but nothing ever happened as far as the announcement went.

Eventually our manager said just write an open letter, and so we did. We just wrote a simple open letter, and it was pretty unemotional in this context, but it got the point across, and we sent it around to Sisky [Adam Siska, bass], Mike [Carden, guitar] and Bill [William Beckett, vocals] and then Bill decided—and I think it was a good call on his part—that the fans do deserve more than just a simple, “We’re leaving, that’s that,” so I’m very thankful for that. Bill really manned up and wrote the announcement that went up. Michael and I kind of did some tweaking, but he didn’t have to stick his neck that far out for us by any means, but he did, so that shows a lot. I just wanted fans to know, more than anybody, that things are okay between us as friends. There aren’t hard feelings, as weird as that is to believe.

So where does that leave you with the band now?

We all still talk, we’re all still friends. If anything, it’s much easier for us to be friends again. [There was] such a weird black cloud hanging over us, and a great deal of time went by where we didn’t speak, and it was just a tough thing. It’s been six years, so I think none of us really knew how to react to this…

Now, it’s almost easier just to want to talk to them and make sure they’re okay as people. For me, I just reached a point were I felt like I just wasn’t being utilized the way I could utilize myself. And I honestly don’t even blame the band for that. I don’t think that was their intention, to let me sit in the corner by any means. But at the end of the [KISS] tour, Bill and Mike were in the back lounge every day, writing the new record and [Chislett] and I never got an invitation to help, and even when I would ask about it, they kept it quiet. I guess that didn’t sit with me at all. I didn’t feel like there was a whole lot holding me there as far as the music was concerned. It was just this long-standing friendship, and I didn’t want to lose that.

In the 2009 cover story, you brought up concerns about the direction the band were taking, as far as working with cowriters. It seems Beckett and Carden have reconnected as a writing team, where that was an area that may’ve had some tension before.

You’re right. It’s a complete 180 in that way. I’m not claiming they were enemies or they hated each other, but I think that’s what a lot of people think. But I will admit that it is a little bizarre how things have panned out. And again, I think it’s a lot of the business side of it. Contractually, they’re the Academy Is…, Sisky, too, they were the original members. Contractually, it’s their baby, and it was never mine. It just wasn’t, you know? I was as close as I could be, but when it came down to brass tacks or whatever… I think it was not only in their best interest, there’s not much of a choice. They had to come back together, they had to reconvene and become a unit again. And actually, this separation has only brought them closer together. And from my understanding, their interests are even closer. It’s almost like you don’t realize how much you agree with somebody until you talk about it or reconnect, and I think that was kind of the last thing that was on our minds, connecting as people… I know they have literally 60 songs and that’s not an exaggeration. They’ve worked their asses off, especially Bill. And I think they’re coming around and finally finishing up those songs and they’re getting green lights [from the label] again, and it’s about to happen again, and I’m really proud of them. And it’s sad to say that I can’t be around for it, but then again, I’ve obviously picked a different path.

A lot of that different path is revolving around your band, the Animal Upstairs. You recently posted new demos with vocalist Sierra Shardae. What’s the latest on that project?

She would be the only member that’s been established this entire time. I’m very, very grateful for that. I was living in Brooklyn and New Jersey, now [California], and I’m going to Milwaukee. I’ve met a few musicians along the way, but those positions never stuck. But her and I have stuck together, and she brings so much to the table and makes me think in a different way. I want to tour and have a full band and have everyone write and be supportive. To just make it so it’s not like a, “I write the songs and you play the parts” kind of thing. Because I hated being in that position at times. I’m not saying that’s how Academy was, but at times toward the end, that’s how I felt.

In Milwaukee, there are at least three people I’m good friends with that are multi-talented, which is exactly what I’m looking for—that everyone can play more than one thing. Even as a live show, I think it can be very exciting to see that. I want to be the weakest link when it comes down to it. I think of Arcade Fire, just seeing their live show and stuff. They have a great deal of members, but a lot of them do more than one thing. It seems way bigger than who writes the songs. Everyone seems to play a vital and multifaceted role. It kind of has this grandiose, orchestral thing to it. And though Animals’ music isn’t really like that, I want the live show to be like that.

Your Bandcamp site says we might be able to expect new music in October?

Actually, I was picking Halloween just to pick a date. I was planning to record in June, but that got pushed back because of new songs we were working on, and I didn’t want to put a cap on [the writing process]. I thought it would be an EP, but with all the new songs coming out after the demos we’ve put up, it feels more like a full-length, and even the message is becoming much more congealed than I expected. So October to me seemed like a good distance away where I could get a good deal of work done and actually track and mix and master this record and have a whole roll out.

It sounds like the live shows will be important, then.

As TAI, I think we did an extraordinary job live. That’s where we took most of our pride, I think. It wasn’t that we used crazy lights or that kind of thing. There was a lot of emotion that went into it. There are so many experiences that I’ve gotten from the Academy Is… that I will take on with Animal. I think that keeping that close is a very important thing and something that would be silly not to use. The vision that I have [for the Animal Upstairs] seems so solid to me, and I don’t think that would exist if I didn’t have such great experiences with these guys—even the experiences with our wonderful fans. I was Twittering and was getting all emotional and shit, but all the comments—there wasn’t a single negative comment like, “I hate you” or anything. I just couldn’t believe that everybody loves Academy so much that they see it as what it is. It’s an entity. It’s big. It’s way bigger than me and Chislett and I’m hoping to use every part of that experience as well.

The fans really do mean everything, and they are the vehicle for whatever music you decide to put out, and they should be honored in every way, so I’m very grateful that we were able to be the band that we were. It just shows that what we did in the last six years was so real and my part of it really meant something to people and I couldn’t be happier about that. It’s been a really emotional but great last couple days, and it just gives me hope for my future and their future, as well.