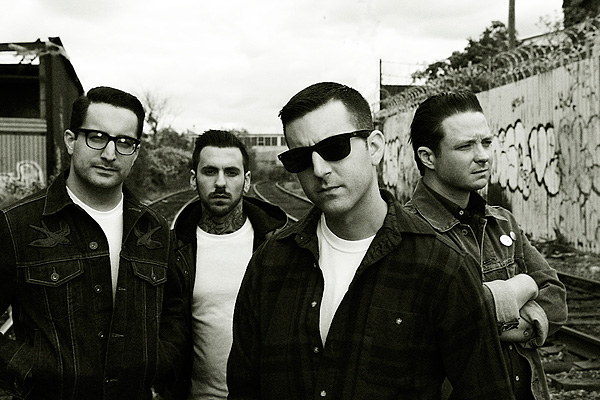 BAYSIDE frontman Anthony Raneri hasn't had much time to catch his breath in 2011. With the band's album Killing Time dropping this past February and extensive touring around the world alongside Saves The Day, I Am The Avalanche, Silverstein and others following its release, about the only thing they didn't do was kill time. Now, with 2012 quickly approaching Raneri has temporarily shifted his focus to something that's always been in the back of his mind—recording solo material.

Raneri will be recording his debut EP later this month at Hurley Studios in Costa Mesa, CA, with plans for an early 2012 release prior to the Where's The Band? Tour. The tour, now in its fourth year, will be a more expansive operation this time around, with three weeks of shows lined up on both coasts and featuring Raneri, Saves The Day's Chris Conley, Matt Pryor of the Get Up Kids, the Early November's Ace Enders and Into It. Over It. that kicks off January 19 in Stroudsberg, Pennsylvania.

En route to a show at the Stone Pony in Asbury Park, New Jersey, Raneri chatted with Altpress.com about the sonic direction of his solo venture, his eclectic choices in cover songs and the upcoming tour.

As far as releasing solo music though, I've always written songs that weren't really gonna work for Bayside, so I kind of just sat on them—I'd record a demo of it and just keep it, and some of them I thought were really good and that they should see the light of day at some point. And the more solo shows I've done, the more people have been asking me if I was ever gonna release something, and I had the time to go into the studio and a couple of my buddies were available to play on it that I wanted to play on it so I figured now was a good time.

How long have you been writing songs for this album? I know it's been an on-and-off thing.
Yeah, it's been on-and-off and it was always gonna only be an EP, so I was only gonna put four or five songs on it. I've been writing songs that I've been sitting on for as long as ten years, when I started Bayside. Any time I wrote a song that didn't work for Bayside I kind of held onto it and saved it. So some of these songs are like—I'd say the oldest one that made the EP is about six years old.

You've talked a little bit about these songs not really fitting what Bayside does. When you write, do you do so for one specific project or do you just see what comes out and decide after the fact? Does your approach differ at all?
Yeah. I kinda just write whatever comes to mind; it usually depends on what I'm listening to at the time. If I go on a long Springsteen binge or something—I'm using Springsteen as an example because I'm pulling into the Stone Pony in Asbury Park, New Jersey right now—it'll shape the kind of songs I'm writing. Or if I'm listening to a lot of Bouncing Souls or Bad Religion or something like that, what I end up writing is probably gonna be something that's gonna work better for Bayside. I just kind of write whatever comes to mind and how it gets released or if it gets released gets thought about afterward.

I try to write a song every day, just to kind of keep my chops up, you know? Especially when I'm home. A lot of times it's not good and it's not good enough to be released nor is it always gonna be the right style for Bayside.

What kind of sound can we expect from the record? You have Steve Choi, Davey Warsop from Beat Union and Jarrod Alexander from My Chemical Romance, Dead Country, American Nightmare and Suicide File playing on it with you.
It's really eclectic. I don't wanna give you a cop-out of an answer, but these songs are so different from each other and in one way or another just weren't the right style for Bayside. There are two songs that are sort of alt-country songs, but I didn't wanna stick with that because I didn't wanna be pigeonholed into doing that with my solo stuff, you know? But those songs are good. Then there's some stuff on it that's influenced by Roy Orbison or, my friend told me this morning that he thought it sounded like Hall And Oates. Every song that's on it sounds completely different from each other. There's some reggae influence, some country influence, it's almost not rock at all.

There's been a huge saturation of punk frontmen going solo over the last half-decade or so. Is trying to take that genre in a different direction something that concerns you, or are you just doing what you want regardless?
I think I'd just do what I want regardless. When it comes to Bayside, we really like our style—we think that we've kind of figured out what we wanna sound like and are really happy with the sound we've kind of created, so we never really mess with that formula too much. So this is my outlet to kind of do whatever I want—I listen to so many different kinds of music that this is my outlet to explore those different styles that I'm into.

So there's no pressure, really. It's the opposite of pressure. Everything I do with the solo stuff when it comes to touring, what songs I should play while I'm touring, how often I tour, what songs are gonna go on this record—everything I do for this solo thing is gonna be my outlet to be free, very different and the opposite to being tied to anything.

You'll be on the Where's The Band? Tour around the EP's release. What sort of set can we expect from you on the tour? Will it be mostly solo material, Bayside songs, or a nice mix?
It's a mix. I'm trying to get the EP out just in time for that tour, so it's gonna be a mix of the songs that are on that, some Bayside songs, and some covers—I always like doing covers because they're really fun to do in an acoustic setting.

It's always a mix but it changes drastically from day-to-day, to be honest, because in those intimate settings it's really easy to read the crowd, see what people are reacting to and see what people are looking for—whether it's the kind of crowd that wants to be loud and sing along or the kind of crowd that wants to sit and quietly listen. It's easy to read the crowd and kind of push and pull with them, so it really changes drastically but it's generally a mix of solo songs, Bayside songs and covers.

Do you have any idea what songs you'll be covering yet on the tour?
I haven't really figured it out yet but I mean, in the past I've done a Death Cab For Cutie song ["I Will Follow You Into The Dark”], for years, an Alkaline Trio song [<["Good Fucking Bye”—which was recorded by Alk3 vocalist/guitarist Matt Skiba as part of his 2002 split with Kevin Seconds–ed.]or years, I do some country songs—actually, the last solo shows I did over the summer I was doing a Mandy Moore song [“["Only Hope”] yeah, there are really no constraints when it comes to the solo thing, I do whatever I want.

With the covers, I think it's cool to be able to take these songs by Mandy Moore and Tim McGraw [“Ju["Just To See You Smile”]h are these songs that I love and show people who probably haven't been exposed to it some good music in a different light. People can be really easily turned off to things based on who's playing it, so I try to share these gems of songs that I've discovered that other people may not have had a chance to discover yet. So, I try to do that but I also throw in stuff that I know everybody's gonna know.

You'll have four or five songs released prior to the tour. Will there be a full-length released in the future?
It's taken me so long to have time to do this one that I have no idea when I'm gonna release another one, but that's definitely in the cards; maybe do a full-length next or EP—maybe just EPs, maybe I'll just release an EP every other year.

Will there be any onstage collaboration between you and the other guys on the tour?
I hope so. We talk about doing it every time we do this tour and sometimes we actually do it when we have the time. We've been doing this for years and at its shortest it's been five days and at its longest ten days, so it's a little tough to find the time to work on a collaboration together. A couple years ago we all learned a Jawbreaker song [“Boxc["Boxcar”]OFX song [“Linole["Linoleum”]time that we all knew we'd want to cover; last year we were kind of covering each other's songs–I was doing a Saves The Day song [“You Vand["You Vandal”]r] was do[Pryor]ayside song [“The Ghost ["The Ghost of Saint Valentine”]kinda fun.

This year the tour's three weeks long which is pretty substantial so I think we'll be able to work out a couple of things together. I think we'll have the time this time around. alt