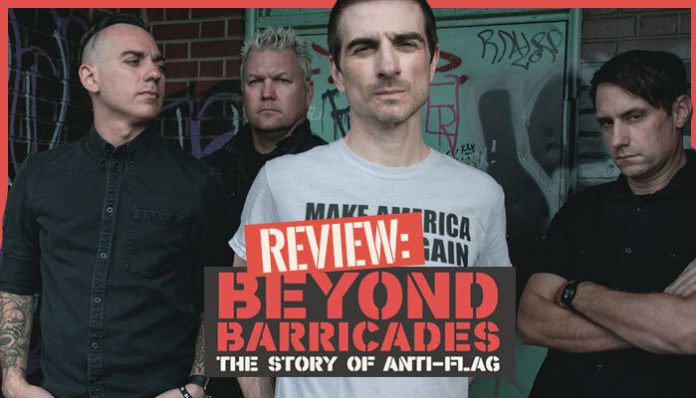 Anti-Flag are a sharp and substantive band who will have a legacy that stands the test of time. But don’t just take our word for it. Watch Rage Against The Machine guitarist Tom Morello, singer-songwriter Billy Bragg, Rise Against frontman/guitarist Tim McIlrath, Brian Baker of both Minor Threat and Bad Religion and many more musicians sing the band’s praises in the new documentary Beyond Barricades: The Story Of Anti-Flag.

Directed by Jon Nix of TurnStyle Films, the documentary explores Anti-Flag‘s incredible and unlikely 30-plus-year history. It also openly discloses their ups and downs with record labels, historical events, several presidents and, most importantly, each other. Beyond Barricades: The Story Of Anti-Flag debuts as an Alternative Press-presented livestream Oct. 3 via Veeps. Tickets are available for purchase now, but we had the chance to view the movie before its premiere, and we were extremely moved and impressed.

The film is a must-watch for fans of Anti-Flag, punk rock, political activism and social justice. It starts just one year before Donald Trump took office, in November 2015, and proves that Anti-Flag don’t just sing about protests and important political events—they truly live them by actually hitting the streets with the people for memorials such as the one that took place in Toulouse, France, after the tragic November 2015 Paris Attacks. The story then moves decades back and goes into great detail about the history of the band, which starts in 1988 with singer/guitarist Justin Sane and drummer Pat Thetic starting Anti-Flag as literal children. Even then, the band started their career off with both a bang and a purpose. They have been anything but silent while critiquing every presidential administration that they’ve lived through, regardless of political party affiliation.

Read more: Here’s how Lady Gaga reacted to Rob Halford joining her fans at a show

There are so many captivating moments in Beyond Barricades: The Story Of Anti-Flag, it’s difficult to just pinpoint a few. One particular moment that stuck out is when Sane revealed that he was a product of dissenters from the start. Sane’s father immigrated to America from Ireland and met his mother in the states. His formerly devout Catholic American mother eventually left the church because she thought that their ideologies were antiquated and sexist. In addition, Sane’s mother was vocally against the Vietnam War, and that liberal mindset stood out in their conservative neighborhood. She also regularly played protest music in their house. Sane didn’t have a choice; he was punk rock from birth.

However, his parents never forced or indoctrinated their views on Sane. Instead, they gave him room to grow and come to his own conclusions. These anecdotes of his parents’ views planted into his upbringing would later become his focal thoughts and message. The footage of Sane and his parents holding each other in a loving embrace is quite heartwarming, given the fact that most people exclusively associate the vocalist with hard-hitting power chords and powerful political speeches.

Read more: My Chemical Romance are capturing some iconic eras with new vinyl

Bassist/vocalist Chris #2 and guitarist Chris Head also get time to shine in a yin and yang fashion, as #2 is constantly at 11, while Head is the more introspective, silent type. Without revealing too much, easily the saddest part of the film is when #2 completely changes his demeanor from above and goes into great somber and reflective detail about the sad and senseless murder of his sister—and the great tolls that the loss put on his entire family. It’s a tearful watch, and no words here could do his sincerity justice.

All in all, the film has enough behind-the-scenes and live footage to satisfy the most ardent Anti-Flag supporter and can easily convert a casual listener into an obsessive fan. The band are also self-aware of their role in music and accept that some people will never like them or their message, which is more than alright with ’them. Anti-Flag practice what they preach and reveal that they have no reason to ever stop being a full-time act. Without a doubt, there will always be causes to publicly champion and write about. Thank you for your service, Anti-Flag. This documentary and your incredible legacy will forever sit on the right side of history.