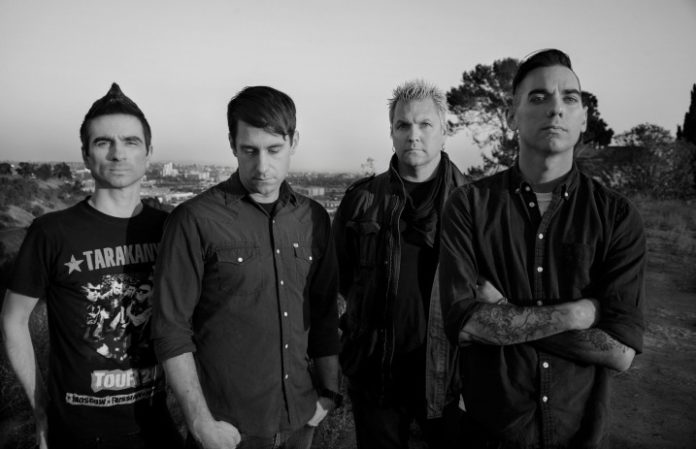 Long-running Pittsburgh political punks Anti-Flag had a good enough 2015 with the release of  American Spring, but they're ending the year with a little something extra. Cease Fires is a collection of re-recordings previously released as the 20 Years Of Hell 7-inch subscription series in 2013 (plus a couple unreleased tunes, which absolutely rule). Confused? We caught up with bassist/vocalist Chris No. 2 to make sense of it all, as well as to talk about the band's history and what it means to be a political band in 2015.

Why did you decide to reissue these songs now?
CHRIS No. 2: It was trepidatious territory for us, because we really wanted to make the 7-inch series for the dude who has been super-committed to our band for a really long time. And then the songs started to get out there, and they’re vinyl rips, and it was like, “We’ve gotta do something with these, but not make folks angry who bought the other piece.” There’s a learning curve to it for sure, but I’m just happy the songs are getting out there. I think they are some really important ones in our band’s lifetime, so if they only lived in this really exclusive club, that seems kinda strange to me. So we’re doing some soul-searching and battling within it, but I think making it a cool picture disc and trying to keep the cost low is hopefully going to pan out to be cool in the end.

What was it like when you were re-recording the songs? That’s kind of sketchy ground, when bands go back and do that.
Yeah, absolutely. You recognize how much timing and how much the culture as a whole impacts you when you’re creating any kind of art. Also when you reflect back on it you’re like, “Man, this was kind of shit.” [Laughs.] Like, “why did this connect with so many people, or why did this one work and this one didn’t?” There’s a lot of really interesting soul-searching that goes on. But the songs that we re-did were ones we never played. So it gave us the ability to breathe life into songs that we loved, but didn’t get a fair shake.

It’s interesting you mention connection: I don’t think I’ve ever really connected with a band’s re-recorded version of an older song. Maybe that’s nostalgia or a time and a place, but that connection is a tough sell with re-recordings.
Oh, absolutely. And it’s never going to be as good. [Laughs.] You’re never going to be at that place in your life where you met that song and it was important to you.

How does this make you reflect on the band’s history as a whole?
When we started our band, you didn’t make money playing punk rock, and that’s kind of how it is now. People aren’t starting bands because they’re financially viable now. They’re starting bands because they want to. That’s where real art and movements get created. Maybe when some of those songs were written, finality wasn’t a thought in our brains. Now we’re older and we’ve been a band for a really long time and you start to think about your own death and your band’s death. And you think about why? Why are we doing any of this? Maybe you think you can change the world in these songs, and then you start to realize, as you get older, and you’re re-recording re-recordings or whatever, you realize that it’s not about an A-to-B action to reaction.

What is it all about, then?
When people look back on Pittsburgh in 1996 when we had the highest police brutality rate in the country, there was a punk-rock band who was singing against that. When people look back on 2015, they’ll see American Spring commenting on the largest wealth divide in history, commenting on a drone program that, clearly, is failing. So it’s not about saying, “We wrote this song. Now all of a sudden tomorrow is better.” It’s about saying, “Hopefully when our finality happens, we can rest knowing that we tried, and we cared about more than just ourselves.” Essentially punk rock and Anti-Flag, it just means empathy. And we lived with empathy.