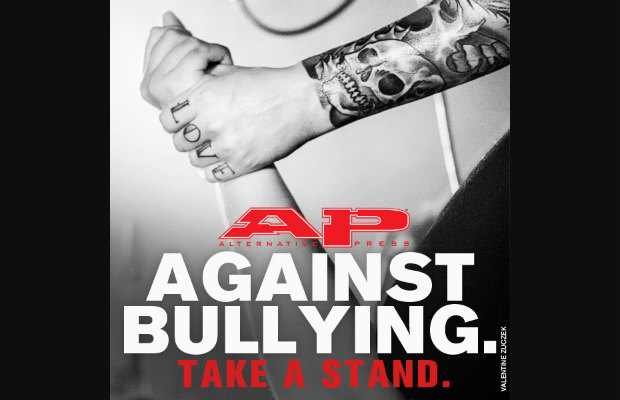 As a staff, we are constantly active on social media and, all too often, come across readers who are facing the torment of bullying in their daily lives. As adults, many of us can still remember facing the typical high school bully, and with time comes perspective.

We thought we would offer up the perspective we’ve gained with a few tips and things to remember if you’re being bullied.

Most importantly, we encourage you to tell someone and seek help. There are resources available and people who will listen. Don’t forget that.

1. Remember this: “Those ‘cool kids’ who bully you are spending their time bringing you down instead of building themselves up.” —Austin Carlile, Of Mice & Men, AP 308
Also note: Those who bully are in no way “cool.”

2. Intervene.
If you are someone who does not face being bullied, use your stature to stand up for those who do. Use your powers for good, not evil, and step in when you see something unfair happening. It will not make you “less cool.” The only thing it will take away from you is the guilt you might feel later for witnessing it and not doing anything to stop it.

3. Don’t partake in the bullying.
The first step in defeating bullying is to not be a bully. If you feel the urge to harm someone else, mentally or physically, take a moment to reflect. How would you feel if someone did that to you? Why do you feel this urge? Think first; put yourself in another person’s position. Visualize the aftermath of your damage. If you feel your abusive urges are out of control and that you feel no guilt or remorse harming another person, please seek help. Healthy people may think about such things, but they will never act on them.

4. Don’t indulge them.
Online, we often say, “Don’t feed the trolls.” Bullies are essentially real-life trolls who are looking to cause chaos and get a response. It’s difficult not to show emotion when a person is verbally, or, worse, physically abusing you, but it is what drives them. If you take it away, they’ll eventually give up. To be clear, you should always defend yourself–just don’t let them see they’ve gotten to you.

5. Block and report.
Anyone who has ever been online has likely faced some sort of harrassment, whether from the dreaded anonymous Tumblr ask, a hacker or someone you know personally being hurtful on Facebook. Luckily, most sites that allow people to message you also allow you to report and block those people. Stop it before it escalates, and screenshot the evidence if you feel you’ll need it later.

6. Remember the people who matter.
As you grow up, it will become abundantly clear that the opinions of abusive, racist, homophobic, transphobic, misogynist or any other negatively biased type of people are not a reflection of you as a person, but a disgusting projection of them. Their ignorance can be fought through education with sensible people who greatly outnumber them for the improvement of our world. The opinions of your family and friends who love you should be allowed to enter your mind and heart—senseless prejudice should not.

7. Don’t be ashamed of who you are.
This takes away every ounce of a potential bully’s motivation to make you a target. There is nothing about you that is fair game for someone else to scrutinize or harm you for. Every element of you makes you a unique human being. Own it and be proud of it. The people who pick on you for it will be the ones who look foolish in the end.

8. Speak up.
Something that is crucial to remember is that bullies–though you may feel like they wield some sort of threat or power–are often kids just like you who have to answer to parents, teachers and the law. Tell on them. If you’re afraid, do so anonymously. Find a group of people who have witnessed their behavior and be prepared to bring the bully down with evidence. As with the previous point, don’t be ashamed that you’ve faced bullying and keep it quiet. That only enables those who bully.

9. Remember: “Living well is the best revenge.”
How bummed are the people who picked on you instead of taking time to improve themselves going to be when you channel their negativity into something awesome? Don’t allow anyone to make you a victim. Take the power from them and use it to grow.Remember that what you’re facing is temporary. You can choose to live through it and use what you learned from it to better your life.