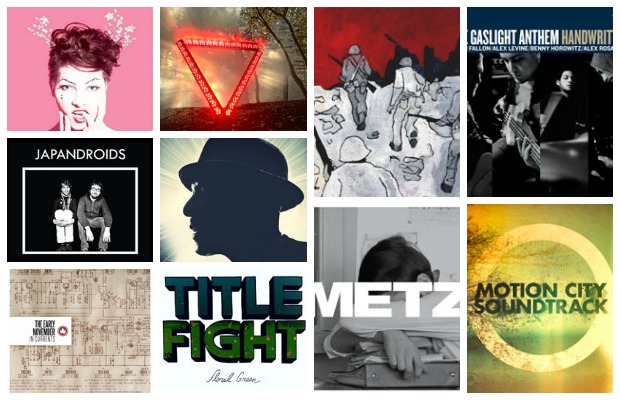 Originally printed in AP 294, you can subscribe to our 10 Essential Albums of 2012 playlist on Rdio.

Another year has drawn to a close, and despite the Mayans’ best efforts, the world didn’t end. (Granted, this issue is on sale for a few weeks before Dec. 21, so maybe we’re wrong…) The AP editorial staff heard literally thousands of albums throughout the past 12 months, and we each had plenty of individual favorites. But after crunching the appropriate numbers, we came up with the following list that best represented our joint tastes in music. These are our 10 essential albums of 2012, in order from 10 to one.

10
THE EARLY NOVEMBER
In Currents

When a band get back together, it’s somewhat bittersweet. It’s great that they’re reunited, but will the new music be as good as the old stuff? The Early November washed away any doubts people had when they released In Currents. The 12 songs flow together seamlessly, with Ace Enders’ powerful lyrics and instrumentation lush in some parts and simple in others. Sometimes breaking up can do wonders for a group’s music. (Rise) [BM]
GO DOWNLOAD: “Call Off The Bells”

The “aging artist hooks up with a younger fan to make a killer album” hook has been used often in recent years (cf. Jack White and Loretta Lynn, Rick Rubin and Johnny Cash, Andrew W.K. and Lee “Scratch” Perry). So when Rancid majordomo Tim Armstrong signed up to produce one of his idols, Jimmy Cliff, we expected nothing less than greatness, and boy, did we get it. This is the happiest, most enthusiastic album you’ll hear all year, not just in reggae but in music as a whole. (UMe) [SH]
GO DOWNLOAD: “Reggae Music”

Album No. 5 finds the men of Motion City presenting more evidence that a band can mature without becoming caricatures of themselves. Go is spritely (“Boxelder”), charging (“Circuits And Wires”), inviting (“Son Of A Gun”) and exponentially more resonant than the mewling of scene wieners swayed by the opportunity to work with cadres of co-writers and appear on The Voice. Drop this magazine and buy five copies of it, now. (The Boombox Generation/Epitaph) [JP]
GO DOWNLOAD: “Boxelder”

7
AMANDA PALMER AND THE GRAND THEFT ORCHESTRA
Theatre Is Evil

I don’t give a fuck how Amanda Palmer makes or spends her money. I’m fascinated by her ability to conjure deadly accurate character studies both aching (“The Bed Song”) and arrogant (“Do It With A Rockstar”), while being able to convey a number of widescreen musical idioms in ways thimble-dicked Pitchfork darlings and Warped Tour zygotes will never achieve—or for that matter, understand.
(8 FT.) [JP]
GO DOWNLOAD: “Do It With A Rockstar”

Title Fight took eight years to get their first album out and only 16 months to release its sequel. Considering how rad Shed was and how much Floral Green blew it away, frankly, we’re worried that we won’t be able to process the sheer amount of awesomeness its inevitable follow-up will deliver. Seriously, how do dudes this young write songs this good? The entire punk and hardcore scenes will be imitating this band for years to come. (SideOneDummy) [SH]
GO DOWNLOAD: “Secret Society”

Some days you just want to punch a low-information voter in the face, flip over and set fire to your boss’ car and kick out the windows in a police cruiser before the tools take you downtown. You’re going to need a soundtrack to accomplish all that, and if you’re trying to cultivate a groovy hate vibe without METZ’s furious, over-modulated aural punishment in the background, well, you’re doing it all wrong, dumbass. (Sub Pop) [JP]
GO DOWNLOAD: “Rats”

4
CLASSICS OF LOVE
Classics Of Love

The punk scene didn’t know how much it missed Jesse Michaels until he came back. The former Operation Ivy/Common Rider frontman released his first full-length in a decade with an intense slab of political hardcore punk and just a tinge of ska, completely blowing away the competition. Our only regret? Classics Of Love have yet to properly tour, meaning we haven’t gotten to sing (and slamdance) along to them live. (Asian Man) [SH]
GO DOWNLOAD: “Gun Show”

There are no outlandish costumes or avant-garde instrumentation on Celebration Rock—just 35 minutes of straight up rock ’n’ roll consisting of guitar, drums and plenty of sing-along choruses. The album goes from zero to 60 as soon as the distorted, reverbed guitar comes in on the opening track, and it doesn’t slow down until the closer. It’s an album meant for dancing, drinking and hanging with friends; no gimmicks needed. (Polyvinyl) [BM]
GO DOWNLOAD: “Younger Us”

In an age where every artist is placed in a genre, Enter Shikari came along and completely blew the curve. The British four-piece started blending elements of hardcore, metal and electronica in 2003, but it was A Flash Flood Of Colour that made people say, “I don’t know what this is, but I fucking dig it.” The question is, how can they possibly top it? If anyone can outdo Enter Shikari, it’s Enter Shikari. (Hopeless) [BM]
GO DOWNLOAD: “Pack Of Thieves”

Handwritten’s songs are brilliant, Brian Fallon’s lyrics are as poignant as always and the punk-rock energy lacking from American Slang is back with a vengeance. As good as this album is (and it’s their best album to date, real talk), what’s even better is what it represents: four guys making real music on their own terms—that just so happens to be released via one of the world’s biggest media companies. (Mercury) [SH]
GO DOWNLOAD: “Too Much Blood”