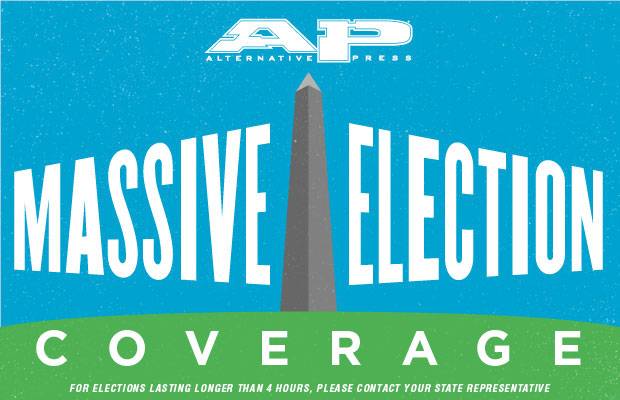 For the past week, we’ve brought you AP’s “Massive Election Coverage.” We showed you some of the best political T-shirts from some of your favorite bands; examined five election issues that will affect you; and solicited one last get-out-the-vote call from Switchfoot frontman, Jon Foreman. Now, after what seems like the longest campaign season ever (until the next election), it’s finally time to get off your ass and go vote. Something as monumental as picking the next president definitely requires a playlist. (Then again, here at AP, we’ll use any event as an excuse to make a playlist.) Here are 10 songs that will get you pumped to go out and do your civic duty today.

AGAINST ME!, “We Laugh At Danger And Break All The Rules” from Reinventing Axl Rose

Any of the songs from Against Me!’s debut, Reinventing Axl Rose, would work for this playlist, but I suggest “We Laugh At Danger And Break All The Rules.” With its chorus of gang vocals and lyrics full of youthful “Remember when?” moments, it’s the perfect song to motivate first-time voters. Granted, this song has nothing to do with voting, but it has a lot to do with being young, when “what we were doing was the only thing that mattered.” Young people are a powerful voting block. We know you’ve got a lot to say. Start by casting your vote. [BM]

While individual AP employees may have specific political beliefs (and if you follow any of us on Twitter, it's not hard to figure out which side of the divide we fall on), AP as a whole doesn't want to tell you who to vote for—just to get out and vote. Hence “It's Time To Party”: If your alarm clock goes off to this mega-jam from Andrew W.K.'s classic debut I Get Wet, it's bound to get you out of bed and first in line at the polls before the sun comes up. Plus, you can insert your political party of choice while singing along, if that's your thing. [SH]

Nothing like a healthy dose of power paranoia to get you out the door on voting day. Congratulations if you can understand all the lyrics crammed into this song on first listen. They’re compressed into less than a minute-and-a-half of mistrust and conspiracy, but—hey—“don’t forget that you’re born free/It’s better to die on your feet than to live on your knees.” We can fight back. Voting against evildoers might be a start. [CW]

This classic 1977 rave-up from the mighty Dils is older than most of the folks who cruise AltPress.com. But when the overarching American condition has been reduced to percentiles (i.e., 99 percent, one percent, 47 percent) the vicious sentiment exhorted here is timeless. In Ohio, certain out-of-state political action committees are spending in upwards of $40 million to unseat a congressman. Could your town be improved with that much money available to its citizens? When Chip Kinman sings, “Class war’s gonna be the last war,” it’s kind of hard to doubt him. [JP]

Ladies, do you enjoy your right to vote? Well, you can—in part—thank Elizabeth Cady Stanton and Susan B. Anthony, the 19th-century grrrls vocalist Brody Homme (née Dalle) shouts out in this three-minute, punk-rock schooling on women’s rights. Looking back at our fighting sisters proves a driving force to say, “Oi, privileged white dudes: You cannot destroy us!” Homme says it best: “Elizabeth Cady/Forever reminding me/I don’t steal the air I breathe!” [CW]

It may seem un-American to choose a song from a British band for an Election Day playlist, but dammit if this song doesn’t fire you up to go put some democracy in action. “I can speak for everyone when I say: We’re sick of this shit,” Enter Shikari scream, 40 seconds into the song. It may sound cliché, but if you don’t vote, you don’t get to complain. Nationality aside, these four boys from Hertfordshire have got the right message: It’s time to mobilize. No matter which candidates you support, get to your polling location and cast your vote. [BM]

FEAR, “Let’s Have A War” from The Record

Two songs with “war” in the title, I know. I swear I’m not the mongering type. But when British Prime Minister David Cameron was on The Late Show telling David Letterman he could only spend the equivalent of $150,000 on his political campaign, my amygdala exploded. When I came to, all I could think of was Fear frontman Lee Ving yelling, “Let’s have a war/Blame it on the middle class/Let’s have a war/We’re like rats in a cage/It’s already started in the city/Suburbia will be just as easy.” Anybody gonna write-in the name of the dude who developed the Mayan calendar on their ballot today? [JP]

American Idiot was a game-changer not only for Green Day but for punk rock as a whole, and this track couldn't have been more prescient of the next four years under George W. Bush's regime. “I beg to dream and differ from the hollow lies/This is the dawning of the rest of our lives,” Billie Joe Armstrong spits out, and if the passion and foreshadowing in his voice and words doesn't motivate you to cast your ballot, you're hopeless. [SH]

“Learn To Listen” might not be a political song per se, but the song is about learning to listen and listening in order to learn, which is essential before voting in an election. Before you head to the polls, watch or re-watch the political debates, listen close, fact-check accordingly and make sure you’re confident in your choice, no matter which candidate you pick. [BH]

STRIKE ANYWHERE, “Sunset on 32nd” from Change Is A Sound

This high-energy Strike Anywhere tune is certainly loud and fast enough to wake you up any day, but on Election Day, especially, with its political lyrics about police brutality and American injustice. Cruise to your voting precinct with “Sunset On 32nd” on full blast and get psyched to cast your ballot and create some change. [BH]