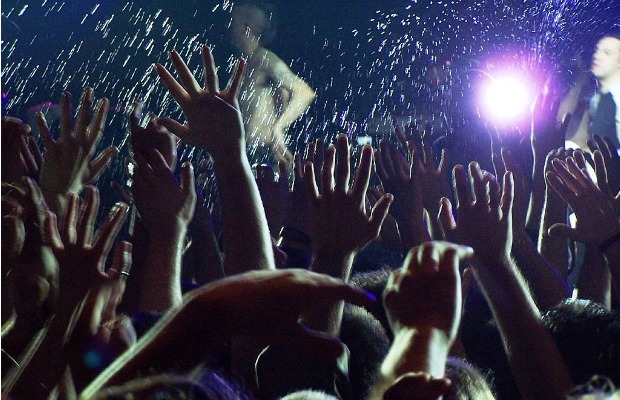 A number of concert-related incidents, some of which ended in tragedy, have recently been making headlines throughout the music community. Stage diving, in one form or another, has been the primary culprit in a recent string of injuries (varying from minor to fatal) and in some cases lawsuits have occurred. The act itself is inherently dangerous, for both divers and catchers, but it’s not the only concern to address when pondering the safety and at concerts. Mosh pits, crowd surfing, riots, drug and alcohol abuse, sexual harassment and even, in the worst case scenario, weapons can all come into the mix of threats that bring up the question: How safe are we at concerts?

Recently, a fan died after stage diving at a Suicidal Tendencies show in Switzerland. The 28-year-old man was apparently not caught by fans after diving from the stage, and he hit the ground hard. He later died from an epileptic seizure while in the hospital. But risky acts like stage diving go both ways, and it’s not just the fans putting themselves in harm’s way. Some musicians have been partaking in some risky behaviors. Last November, at the Vans Warped Tour in London, rapper George Watsky jumped 40 feet after scaling a lighting rig during the concert. The rapper landed on a woman and broke her arm.

It doesn’t stop there. EDM mogul Skrillex is currently being sued by Jennifer Fraissl, a women who claims Moore jumped on her from the stage in February 2012 during a show at the Belaseo in LA, leading to significant injuries that caused her to have a stroke. Skrillex is known for stage diving (especially in the earlier years of his DJ career), and the argument could be made that any fan attending should be prepared for such an event. But the law does not appear to be coming down on the side of musicians.

Last February, $1.4 million in damages were awarded to a women who suffered injuries at a Fishbone concert. The women broke her skull and collarbone when the band’s lead singer, Angelo “Dr. Madd Vibe” Moore stage dived at a show in Philadelphia. The presiding judge in the case found that Moore had shown little remorse for the incident and hasn’t stopped stage diving since. Moore’s reluctance to stop even after such an event shows just how culturally ingrained stage diving and other potentially hazardous behaviors are in music culture.

What’s being done to address this and to keep fans safe? Dan McGowan, co-owner of the Crofoot Presents and the Crofoot Ballroom, has perhaps the most relevant perspective on concert safety. McGowan and his team produce more than 350 shows a year at the Crofoot and other venues throughout metropolitan Detroit, Michigan. “We discourage [crowd surfing and stage diving], but for certain shows it’s unavoidable,” he says. “Crowds do what they do, so we just work to provide the safest environment we can. We properly staff the barricade and hope we can assist in a safe landing for the air-borne.”

But what about more serious threats to concert safety? This December will mark 10 years since Pantera guitarist Dimebag Darrell was shot and killed onstage by a crazed fan while playing with the band Damageplan in Columbus, Ohio. How you do you prepare for a worst-case-scenario like this? Such a threat is always in the back of the mind of John Douglas, who’s worked in venue security at the Grog Shop in Cleveland Heights, Ohio, for nine years. “You do the best you can to watch everything,” says Douglas. “You spot people who are going to be trouble. You just can’t predict something like that—it’s a fairly rare occurrence. From what I see on the news, sadly, it’s a lot more common for some kid to shoot up his school.”

“In today’s world, there are growing concerns for all public spaces,” says the Crofoot’s McGowan. “Heartbreaking incidents like Sandy Hook, the Boston Marathon bombing or the Aurora, Colorado, shooting have to be considered. It’s no fun to think about, but these things happen, so anyone that manages a public space should have some kind of game plan.”

Despite a looming threat of something tragic, smaller issues tend to be the main ones faced by venue officials when trying to maintain concert safety. “We read about these horrific venue tragedies around the world where people go out for some fun but do not get to come home,” McGowan says. “We stay up, we work hard, we [pay] a lot of attention so our events and our buildings are safe—but accidents can happen anywhere. The biggest concerns usually relate to trips and falls, or the occasional crowdsurfing snafu. Patrons running in traffic outside is also a worry, but there’s not much we can do about that.”

McGowan’s mention of patrons running in traffic is, unfortunately, both timely and relevant. It’s likely to become of much greater concern, following the tragedy that took place at this year’s South By Southwest festival, where a suspected drunk driver fleeing police plowed into a crowd of fans waiting outside of the venue for a Tyler, The Creator show.