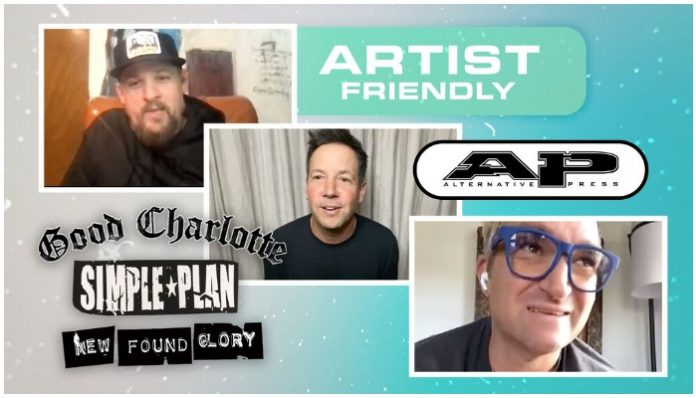 The Pop Punk’s Still Not Dead tour was announced to great anticipation in February 2020, just following the release of New Found Glory’s latest album, Forever And Ever x Infinity. Slated to begin in May, the tour would have featured support from Knuckle Puck.

Unfortunately, the event was postponed as a result of the COVID-19 pandemic. Both bands found ways to stay in touch with fans during the quarantine. However, they also remained committed to making the return to live music as soon as it was safe to do so.

Read more: Awsten Knight and Joel Madden have a low tolerance for boredom—watch

Now, the tour has officially been rescheduled, with public tickets going on sale May 28. Simple Plan and New Found Glory are eager to hit the road. Surprisingly, while both artists are practically synonymous with pop punk, the event will mark the first time that they ever tour together.

In advance of the run, Simple Plan’s Pierre Bouvier and New Found Glory’s Jordan Pundik linked up with Good Charlotte’s Joel Madden to discuss the tour. Though it offered the chance for the artists to catch up and discuss the upcoming run, the conversation led to so much more.

The three artists reflected on the process of growing older as musicians, as well as the changing landscape as pop-punk music enters a new decade. They also discussed the surging revival of pop punk, with new artists picking up the torch for the genre. They even touched on what it would have been like if the trio went to high school together and formed a supergroup.

JOEL MADDEN: What about music? Are you guys gearing up?

PIERRE BOUVIER: Well, we have new material that we’ve been sitting on for a while. We’re preparing to figure out how to release it. So with everything that happened, we had a new record that was getting ready [to be] released before the pandemic, and we put the brakes on that just because we didn’t know if it would be worth it, not being able to tour on it and that kind of stuff. And now, I think we’re trying to figure out how we want to release it. Like, do we want to do a few songs or a whole record? We have new stuff that I’m super excited about. We’ve had some of these songs for over a year-and-a-half. But I’m excited. They still sound fresh. We did some stuff with Zakk [Cervini]. We did some stuff that I produced [and] we did some stuff with our guy, JVP, who was an engineer on our fourth album that he co-produced with me. So I’m excited about the new stuff. What about you guys, Jordan? You’ve been releasing some stuff, right?

JORDAN PUNDIK: Yeah, we had the album that came out right before COVID happened. And for us, we put out a record, and we usually tour crazy off it. So, it’s been really weird. I think we’re going to, obviously, try and push out a deluxe edition with new artwork. And we recorded five new songs to add to it and have that for the tour.

BOUVIER: Nice. Yeah, I’m thinking that we’re going to have new music out for the tour as well, but I’m not 100% sure. But I think, at that point, we’ve got to be putting out some stuff that we’ve been sitting on. So, I’m excited for people to hear it. We’ve always felt true to what we sound like, and pop punk runs through my veins, as I’m sure for you guys as well. But our stuff sounds like old-school Simple Plan but [with] a modern twist to it. And we always have a couple of curveballs. We can’t help ourselves. Simple Plan always likes to put a song on there that the true, hardcore fans would be like, “What the fuck is this?” [Laughs.] So, we’ll see how that turns out.

MADDEN: Well, is there anything else you guys want to talk about?

PUNDIK: We also have to talk about what our band name is going to be.

PUNDIK: Yeah. We need to figure that out.

MADDEN: We do. I mean, definitely it’s got to be like a merging of running themes of each of our bands throughout our albums. We’ve got to find some words—it’s probably three words that would be synonymous with each of our bands.

BOUVIER: Is it going to be like a vocal trio?

MADDEN: It’s a vocal trio with backing tracks that are all programmed by probably Marshmello.

PUNDIK: Yes, I’m down for that.

MADDEN: Our Spotify numbers are going to be insane, all of ours together. It’s going to be great. And then short tours. We call it “burst touring,” where we just do three-show bursts.

BOUVIER: Oh, my God, it would be so great to have a private jet and just hop on and do Friday, Saturday and then head back home.

MADDEN: Yeah. I’m excited for your guys’ tour. And I would bet you someday if we did New Found Glory, Simple Plan and Good Charlotte, that shit would crush.

PUNDIK: It’s like the big five, but the big three.

BOUVIER: You guys know that we’ve always been up for putting together some good packages. So [if] you guys give me a call, we’re ready to go. It’s going to be awesome. Take that thing around the world.