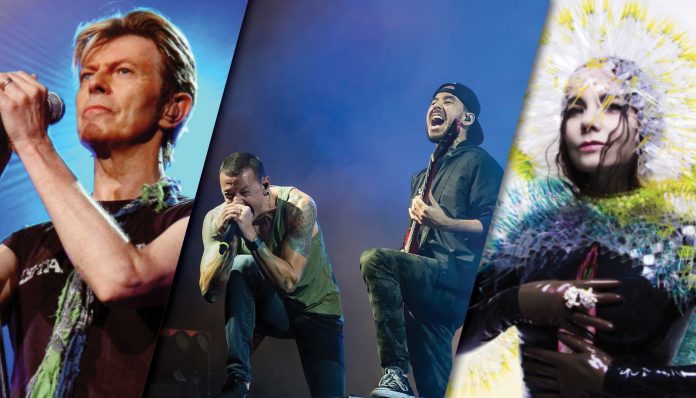 Artists can easily find themselves forced into a box, shaped by fan expectations or public assumptions about how they should sound. No matter how much some people want to break away from the norm, it’s difficult to escape from what made them big in the first place.

That concern doesn’t apply to these artists, though. Over their long careers, these artists continued to reinvent themselves. Every one of their albums sounds completely different from the last, whether they switched genres or challenged genre expectations altogether. All artists have peaks and valleys—not to mention patterns they like to follow—but these artists always followed their muse.

Does it really have to be a question here? Out of all the ‘90s bands, Radiohead arguably were one of the most versatile, going from post-grunge on Pablo Honey to the expansive vision of OK Computer. They weren’t done yet, though, going into a more electronic bent on Kid A, looping back around to alt-rock on In Rainbows and even leaning into some baroque pop on A Moon Shaped Pool. Compared to so many artists, the fact that Radiohead can change this much has made them more relevant today.

Kendrick Lamar has fewer albums under his belt than many others on this list. But he’s an exception to the rule in more ways than one, with K. Dot’s albums each having a level of brilliance behind them. Not many people in the hip-hop game can sport classics back to back, as with good kid, m.A.A.d city or the jazz-influenced heartache behind To Pimp A Butterfly. Considering he just announced a new album on the horizon, which will be his final with longtime label TDE, the new material can’t get here fast enough.

You’d think that when you have a visionary auteur producer at the wheel, things might tend to follow a single course. When that person is Trent Reznor, though, things can get hectic fairly quickly. Following the early period of Pretty Hate Machine, NIN have found new and improved ways to surprise us with every record. One minute he’s deep into industrial, as with The Downward Spiral. The next, he’s leaning into electronic rock on With Teeth. Now, he’s going full-on film score with Bad Witch. As much as it seems like it shouldn’t work, it takes a specific kind of genius to make something like “Hurt” fit in the same conversation as “Every Day Is Exactly The Same.”

Now Bowie… He’s practically the godfather of artists who don’t stick to the formula. His nickname as the musical “chameleon” isn’t a mistake. Bowie went from being the king of glam rock in the ‘70s to making the beginnings of post-rock on records such as Low. Even in each of his phases, the songs didn’t sound the same, with Ziggy Stardust going for a completely different tone than Aladdin Sane. Up until his final release, Blackstar—released just two days before his death—Bowie wasn’t trying to ride trends. He was a musical alien who tried to communicate every single feeling he could in song.

Of all the metal offshoots back in the day, many nü-metal artists tended to stick to a unique musical vision. Not so with Linkin Park. Just after Hybrid Theory hit it big, Meteora doubled down on the intensity. Going into their later work, there’s the pure metal assault of The Hunting Party, the electronic sounds of LIVING THINGS and the concept album A Thousand Suns. Any JNCO jeans-sporting fan from back in the day could only dream of a band who would take this many left turns.

What, you thought rock was the only genre that liked to have a little fun every now and again? From one OutKast song to the next, you would swear that André 3000 and Big Boi were deliberately trying to outdo what they did on their past records. One minute there’s the otherworldly feel of ATLiens, and then you have the blend of rock, funk and hype behind Stankonia. Considering that this duo worked until they both were in different creative spaces, you could say that OutKast did everything they could possibly do as a group.

Since Radiohead became the poster children for how to change your sound, why not include the band that started off as Thom Yorke’s musical offspring? Outside of Showbiz, Muse haven’t stepped in the same place twice since, from the space rock of Origin Of Symmetry to the arena rock of The Resistance to the deep dive into dubstep and electronica on The 2nd Law. While you might call it trendy to genre hop like this, Muse were never ones to go along with the program. The mainstream comes to them, not the other way around.

Even some of the greatest songwriters in the world aren’t safe from digging into their old ideas every now and again. Joni Mitchell, however, still seems as curious about her sound as she was back in the ‘70s. Across decades of material, she has become the paradigm of how to stretch the limits of what you can do as an artist, going from mellow acoustic jams to working with some of the best in the business from the worlds of jazz rock and classical music. Just listen to the two distinct versions of “Both Sides Now” and you’ll get it. This is a woman who is almost unrecognizable from “Big Yellow Taxi“ these days.

Most artists tend to just rest on their laurels once they find a sound that works. Everything Kate Bush has done since the ‘80s feels like it’s been a risk in some way. Ever since she got the nod from David Gilmour on her first releases, everything from Hounds Of Love to The Dreaming feel like they’re coming from a completely different universe than many pop artists. There’s a reason why Bush never toured these albums, either. When you’ve reached perfection time and time again in the studio, why wouldn’t you move on to bigger and better things?

Of course, it’s much easier to never make the same album when you have a different lineup for every release. Even though Damon Albarn is the spirit of Gorillaz, it’s practically a different-sounding project whenever you hit play on one of their songs. Where most bands just change from album to album, they are practically a different band from song to song. You’ll get bubblegum pop with “On Melancholy Hill,” dance music on “Saturnz Barz,” alternative rock on “Feel Good Inc.” and now post-punk on “Aries.” Given the man’s track record, Albarn could probably have Gorillaz make a bluegrass song and somehow make it work.

Ah, yes, the man they call the Purple One. Considering the number of people Prince gets compared to, it’s time to set aside debates about who is best. Outside of the raw charisma he had onstage, the amount of genre-spanning talent Prince had throughout his career almost couldn’t be contained in one band, even composing songs for everyone from the Bangles to Sheila E. The first string of songs on Sign O’ The Times alone should tell you that he’s on another level. You can call it R&B, rock or soul, but for most listeners, it’s just great-sounding music.

When the 1975 first started to make the throwback sounds of the ‘80s on their debut, the potential was clearly there. For the past few years, though, Matty Healy’s band of merry men have been looking to take their sound in all different directions. I like it when you sleep… touches on soul and R&B like D’Angelo, and A Brief Inquiry… proves that they have definitely listened to Radiohead quite a bit. Hell, they practically gave us a glimpse into every style they can think of on Notes On A Conditional Form. If the rumors of the band going on a break is true, chances are they just need to recoup from just how much new material they are pumping out.

Does anyone really need to be told who he is anymore? Donda’s recent release provided a shakeup to the music world, but how can we forget how bold Kanye West was at the beginning of his career? Although he could have made a thousand more College Dropouts if he wanted to, every step of the way has felt like a leap forward, like the jazzy breaks of Late Registration, the cold atmosphere of 808s & Heartbreak and the stadium-rock level of bombast on My Beautiful Dark Twisted Fantasy. He may be settling down ever so slightly in his older age, but West’s boundless creativity is still there.

No one else in the music world knows how to take creative risks quite like Björk. Throughout her career, it almost feels like watching some eclectic painters find new color palettes of sound in their arsenal, whether it’s the trip-hop sounds of Post or the use of the human voice on Medulla. Anyone who thinks that their music is against the grain or non-commercial has to reconcile with Björk. Her songs will be the reason why aliens want to make first contact with human life.

Unlike many others on this list, Fiona Apple has elected to maintain a slower pace. While other ‘90s alt-rock artists such as Weezer seemingly offer releases every six months, having to wait years (if not decades) for the next Apple release can feel like a real challenge. When she’s ready to go, though, she makes every note count. Outside of the amazing piano balladry behind Tidal, her knack for singer-songwriter music has definitely shaken up the pop world. Considering her last album, Fetch The Bolt Cutters, has become one of the most celebrated releases of the modern age, it only proves why Apple’s music is worth hanging around for.