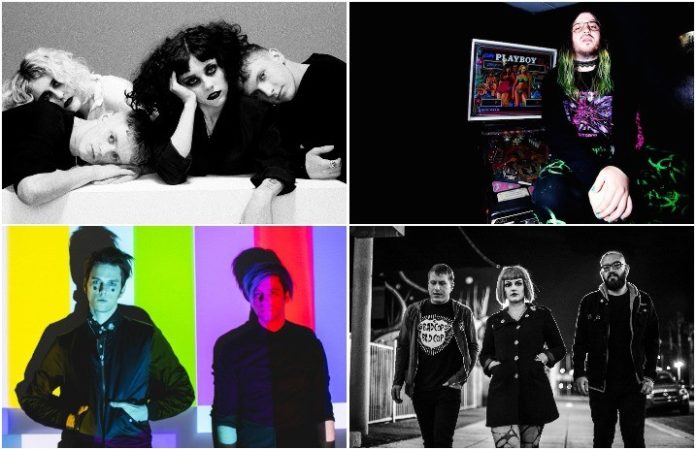 This year will be a crucial period for many acts, both mega and obscure, but it all boils down to the possibility that this might be a great year for music across the board. Take a look and take notes—you don’t want to sleep on any of these bands.

Read more: Our Most Anticipated alternative releases of 2018

I Don’t Know How But They Found Me (alt/indie)

What happens when you have the former Panic! At The Disco bassist and ex-Falling In Reverse drummer join forces? You get a very ‘80s glam-rock band. (Bet you weren’t expecting that response.) Dallon Weekes and Ryan Seaman not only sound the part, they look it, too—donning shimmering jackets, long hair and just enough makeup. The duo have only released two tracks—”Choke” and “Modern Day Cain”—but they’ve already managed to garner nearly 20K followers on Spotify, and their fans are eagerly awaiting more. Keep an eye on this band, that’ll, without a doubt, win you over with catchy hooks and a beat that’ll get you dancing around the room. —Kristine Cannon

Vesperteen already has a dedicated fan following, called the VesperTEAM—and for good reason. With just one self-titled EP under Colin Rigsby’s belt, comprising just six songs, one would wonder how he managed to amass such a fanbase. But just listen to one song from start to finish and you’ll get it: His anthemic rock and soaring, catchy choruses will give you Bleachers and the 1975 vibes. Oh, and his live shows? Expect a high-energy experience where you’ll witness Rigsby perform an entire set behind his drum set standing up. —Kristine Cannon

We Were Sharks (pop punk)

The unforgiving vigor of pop punk is in safe hands with We Were Sharks. Fast-paced melodies ride high above the hurried clattering below—not forgetting sing-along choruses filled with lyrics that ooze angst and wit. In February, they’ll be releasing their new album, Lost Touch, and from the sound of the singles they’ve released so far, it’s going to be one hell of a ride. —Steven Loftin

Hopeless Records' powerful metalcore quintet Sylar have been tossing down ferocious tracks and picking up momentum ever since their debut EP Deadbeat in 2013. From harsh vocals and heavy breakdowns to reflective lyrics and entrancing melodies, Sylar are out to prove they are not a one-dimensional band. The energy pulsing through every track translates into their live performances, drawing in attention from start to finish with their crushing sound and contagious spirit. From their 2014 debut full-length To Whom It May Concern to 2016's Help!, Sylar continue to create a heavily produced almost mechanical sound that breathes a whole new life into nü metal. —Whitney Paxton

Read more: Household are going on tour with Senses Fail

At a time when the alternative scene is seemingly hankering for smarter music, emo newbies Household should do really well. If an earnest, sprawling take on punk-influenced emo sounds like your deal, and you dig the likes of Can’t Swim, Microwave and Movements, this lot will be for you. Charismatic yet somber, emo yet uplifting; Household look set for a killer 2018. —Jake Richardson

Read more: Sharptooth are heading on tour with Anti-Flag, Stray From The Path

Fully living up to their name, Sharptooth come at you with the powerhouse rage of uncountable generations scorned. Vocalist Lauren Kashan aims at “fuck-boys” and a certain [expletive] president with her hate-filled screaming while the rest of the band come together like a behemoth to support her. This is one band you don’t want to miss—not that they’ll give you a chance. —Steven Loftin