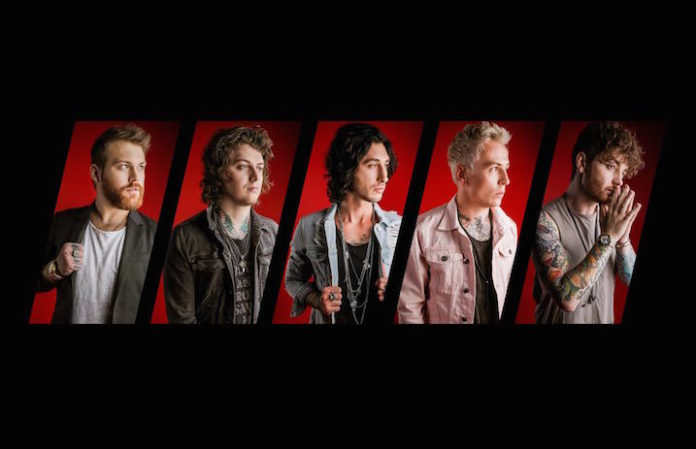 On Friday, Asking Alexandria will release their self-titled album, their first with vocalist Danny Worsnop in five years. We spoke to the returning frontman about each of the tracks on the new release and the stories behind them as well as his path to redemption, letting go of his past and starting anew with the band. Worsnop says writing his solo country album, The Long Road Home, helped him confront the demons of his past and set him up for a renewed relationship with his bandmates in Asking Alexandria. “I had to face things,” he shares. “I had to accept things that’d I’d done and things that’d been done to me and find ways to move forward.” It took hitting rock bottom multiple times for Worsnop to come out of these experiences a completely different person. “I was harbouring such resentment and hatred because I wouldn’t take blame, and I’d put it on other people,” he says. “Writing that record helped me to turn that around and all of the sudden, I’m not full of anger anymore.”

And while he and the people who care about him know he’s changed, he says he does hope others can realize it as well. “I mean, I’m an entertainer. I am naturally drawn to attention. I physically put myself in the center of attention all the time, professionally and unprofessionally. It’s in my DNA. I crave it,” he says. “I think, by the same token, there is a lot of me that craves that redemption and craves for people to see that I’m different. I think it’s me, in a way, still trying to forgive myself, and it’s easier if other people forgive me. It’s that validation. Otherwise, it’s people constantly bringing up my past and reminding me of shit I’ve done.”

You can pick up Asking Alexandria (out Dec. 15 via Sumerian Records) here, and see all Worsnop had to say about the new album and how it came together below.

“Alone In A Room”

It’s about writing The Long Road Home; it was my reflecting on reflecting. Obviously [that] album was a very personal one for me, and I included a lot of things about myself in it. I think I’ve been shying away from so much of myself and bottling a lot up and running away from a lot of problems that I had. That album was the first time that I’d actually sat down and faced and tried to deal with the things I’d been through. It was a great form of therapy for me; and as soon as I finished that album, I started work on this Asking Alexandria one. So, the story basically just continues. You know, escaping myself and locking myself away to where I didn’t have a choice but to confront me.

[“Alone In A Room”] picks up right where my [solo] record left off, and then it leads right into “Into The Fire,” which is the song [about] when you have faith in yourself or you’ve really shone lights on dark parts of yourself; that’s scary to do. It’s uncomfortable that you know you’re always going to find things about yourself that you don’t like—especially when you’re a person like me, and you’re fucked up in the head. There’s always parts that I wish weren’t there, and I wish weren’t me, but it’s part of who I am and what I am. The song is about finding ways to take those bad things about myself, those character flaws, those mental problems and somehow turn them into a good thing. It’s essentially leaning into the crazy and figuring out ways that I can come out on top of my problems.

It’s about joining the band again, essentially. It’s when you have this knowledge that you have to have blind faith going into something like this and making a massive life change where I’ve left so much behind and faced so much of myself. You have to have blind faith in yourself that you’re doing the right thing. At times you have doubts and you have fears about it, and obviously being an addict there’s a lot, you never stop. There are constantly temptations, constantly that itch in the back of your head. Like, if I go into a place and someone’s high: I might not have even seen the person, but I can smell it in the air, and it’s overpowering. And you really have to have that focus and belief in yourself that you’re doing the right thing, just stay away from it and just walk away.

And it’s the same with being back with the guys again. It was a scary thing because I’ve spent three years away establishing myself for two other very different things, and the last time I’ve seen them, we were screaming in each other’s faces. Fast forward three years and we’re in a room together for the first time. We haven't even spoken on the phone, and it’s like [awkward voice], “Hey, guys.” Am I doing the right thing? In my life and what I’m doing? They’re the three kind of big story songs.

This is a very interesting song because I actually wrote this song twice. It was the last song I wrote for the album. I called Sony, who are our publishers, and I talked to our handler, and I was like, “Listen, I’m writing this album. I’ve got one song left to do. Is there anything you want me to write? Is there anything a movie is looking for specifically or a TV show or like anyone looking for a soundtrack?” She said there was nothing that’s on the table right now that people are looking for specifically, but here’s the list of things that we get asked for literally every fucking day.

So, I’m sitting in the studio, and I’m looking at this list. Ben’s next to me, and he starts reading it, and he’s jokingly like, “Dude, just fucking do all of them.” But I’m not a man to joke with, so I checked out every fucking box on that list. It was a cool song, but it sounded contrived. And we sent it in, and we sent it to the Sumerian, and Ash [Avildsen, Sumerian Records CEO] is like, “I like it, but it sounds like you were just checking off boxes on a list when you were writing it.” And and I was like, “Ah, it’s so amazing you say that; you’re so observant. That’s literally what I was doing.”

So yeah, I sent it to Sony, and they were like, “We love it, but I definitely want to hear what else you have.” So I went in the next day and wrote a completely new version, and that’s the version that made the album. It’s almost like “Into The Fire” is the dark side of “Rise Up.” Where “Into The Fire” is focusing on those negative things that I’m trying to make work for me, then “Rise Up” is the pushing forward of those positive things and becoming better through it. The new version of the song came out great, and I am terrified of it because some of those notes in the chorus are stupid high, and I’m very not looking forward to that almostly definitely being toward the end of a show because that’s always how my cards seem to come up.

“When The Lights Come On”

I’ve never done a song about music before. Almost all great bands and artists have done one, where it’s been that kind of breaking-the-fourth-wall song. And [“When The Lights Come On”] is—it’s right before a show. It’s that lead up. It’s essentially those about 120 seconds before the show starts from the artist’s point-of-view. It’s almost like there are vibrations in the air, and it just vibrates your entire being. You can feel the anticipation in the air. You can physically feel the excitement from the crowd. And it’s an incredible feeling, and I think that’s what attracts people to this business so much because it is a high. It’s a drug in and of itself. And my God, I’m addicted to it. There’s no way to fully understand it and know it unless you’ve had it. But it gives you a little idea. It’s like heroin. Unless you’ve done it, it’s impossible to describe. But this is my best attempt. That is not advertising the use of heroin. Do become a successful musician; don’t do heroin.