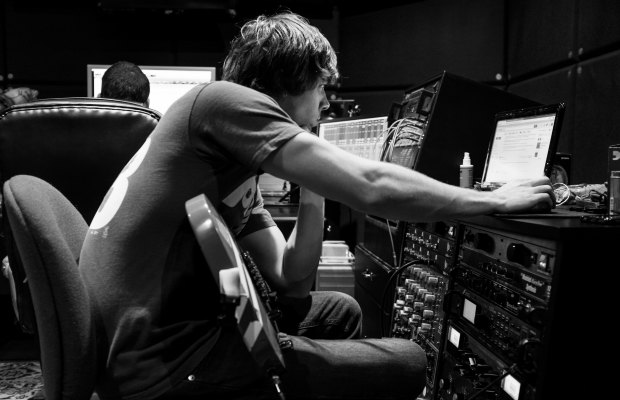 August Burns Red closed down 2014 by putting the finishing touches on a new album. They’ve been busy at Atrium Audio, the same studio in their home state of Pennsylvania where they made last year’s Rescue & Restore (which debuted at No. 9 on the Billboard 200) and the 2012 Christmas collection, August Burns Red Presents: Sleddin’ Hill, with producers Carson Slovak and Grant McFarland. But album six for ABR will arrive with at least one big change: a new label. After roughly a decade with Tooth & Nail Records imprint Solid State, JB Brubaker (lead guitar), Jake Luhrs (vocals) Brent Rambler (guitar), Matt Greiner (drums)  and Dustin Davidson (bass) joined forces with Fearless Records. Co-founder Brubaker called in to give us an update on how things are going with the forthcoming set, due sometime in 2015.

I'm sure there were a number of options to explore at the end of your contract. What led you to choose Fearless Records?
JB BRUBAKER:  We had a contract from Tooth & Nail/Solid State we were about to sign before our contract was up; before Rescue & Restore came out they were trying to re-sign us. It was like the eleventh hour where we thought, “Should we consider crowdfunding?” We were really high on that idea for a while. Then we slowly got into more of a profit-share idea with labels where we'd still have a label helping us with their reach and everything. Eventually with all of the number-crunching and the extra work involved, we were like, “Well, you know, we might just do another traditional [deal rather than crowdfund the record].” So that's what we ended up doing. We felt like we had the pick of the litter as far as indie labels. After meeting with the labels we were most excited about, we [narrowed it down] to either Fearless or Solid State.

We really do love Solid State. We had a great ride with them for many years. They are great people and we certainly have no ill will toward them. They didn’t do anything wrong that caused us [to leave]. We just felt like it might be time for us to get a different look.

What are some essential elements your fans will hear on this record? What are some new things you’re exploring?
We're “vets” at this point. None of us are 18 anymore. Our tastes have changed as we've gotten older and more adept at what we do. The basic elements that make ABR [sound like ABR] are the heaviness, the weird off-time rhythms, and I think we have a pretty organic rock sound. I don't think we sound like the new wave of metalcore bands where they have a lot that glitchy, computer stuff and wacky sounds and all that jazz. We've kept it pretty organic. I don't want to say we're “raw” because we obviously have slick production and we like everything to crisp and tight.

But we're not wacky in our sound. We don't [have] big singing choruses. This is something that definitely holds true on our new record: We're not playing songs that follow a pop structure. There aren't clean choruses. It's not like, “Play real heavy riff, scream over it, then break into pretty chorus where Jake is like, 'Ahhhhoooohhh,'” you know what I mean? We're not really into that and that's never going to be us. Our songs are generally pretty progressive. This new album stays that way. We're definitely a metalcore band by definition, but there are a lot of progressive elements to our sound.

As we've been a band longer, we've gotten more progressive, especially in terms of incorporating stuff that's a little outside the box of the genre. We really enjoy that kind of stuff; it's fun for us to explore other styles of music and drop that into our metalcore songs. We started doing more of that on Rescue & Restore. There's even more of that on our next record. There's “surprise” parts.

You've got to keep it interesting for yourselves lest it start to feel like a business.
Exactly. We don't ever want to feel that way. I can't imagine being a musician and just writing just what you think people want to hear. You have to make yourself happy, too.

In between the outside-the-box stuff, we still have the really heavy stuff that you've come to expect. I can say confidently the album is definitely heavier than Rescue & Restore, as a whole. There's a lot of [experimental] stuff but we've balanced it a little bit better.

How far along are you in the recording process?
We're very far along, actually! We just finished our first mix session. However we have not completely finished our vocals yet. Jake is working with Grant [McFarland] in the B-room at the studio. They're putting on the finishing touches on the vocals before we all sit down with the finished songs and have everyone have their input. We haven't all heard a lot of the vocal parts yet. We all have to kind of chime in our opinions on that. It's a democratic process.

But we're pretty far along. The record won't come out for a while, so we'll have time to sit on it and if we hear stuff we want to change a month or two from now, we'll have the option of doing that, which is nice. I'd say we're 90 percent done at the moment.

Speaking of Jake, can you tell me a bit about his nonprofit?
He's been doing it for a few years but he's gotten a lot of bands on board with it and done a [new] big push with it. He runs a nonprofit called HeartSupport. It's basically a community for kids who have dealt with abuse, bullying or addiction and things of that nature, who feel like they have no other place to turn. It's basically a support system for people going through stuff like that, which is cool. There's a lot of people out there who are [struggling] with those issues. We're proud of Jake for taking the time and resources to work on that.

What does 2015 look like for August Burns Red?
We're hitting the road in January. We're doing this tour presented by Rockstar Energy called the Frozen Flame Tour [with Miss May I, Northlane, and Erra]. It runs through March. It will be our first continuous North American tour since the end of 2013. We're looking forward to that. That will kind of be the last hurrah for us for Restore. We'll chill ‘til this new record comes out, then we'll reset and tour the world again. I can't really say when and where at this point, but we'll be all over the place in 2015 and beyond.

Like you said, you guys aren't 18 anymore. This is your sixth album. People grow up, get married, have kids, buy houses. Does August Burns Red intend to remain a full-time touring band, cranking out records and touring the world?
Yeah! Well, man, we do have all those things you mentioned. I just got married in September. Brent has a kid now. Everyone is dating or married at this point, which is cool. But we are still fully committed to doing ABR. It's a really fun job. Even if it feels like a “job” sometimes it's still like, “What would I rather be doing?” Probably nothing 'cause this is still an awesome job. I mean, you get so much freedom. When you're not on tour, you have downtime to do pretty much whatever you want. It's a great luxury and we're very fortunate to be able to still do it. I think that we'll continue to do it as long as it makes sense. Hopefully that will be for many years to come. I'm certainly not looking to do anything else at this point [laughs]. ALT