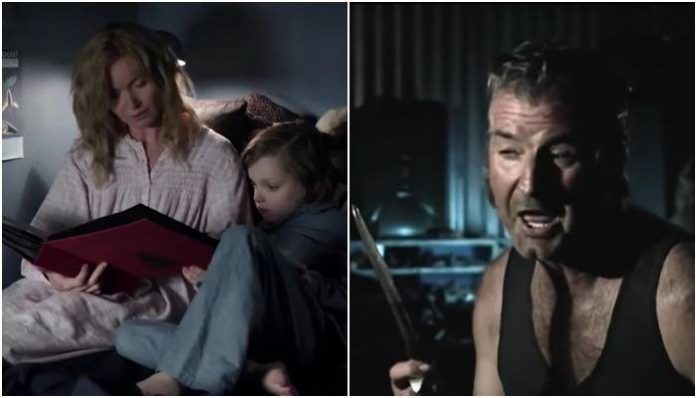 We’ve covered the most happening hardcore bands in Australia. We’ve crossed off all the things bands need to do when they’re there. Now here is a list of movies that will get you through the long-haul flight or any of your brutal layovers, giving you plenty of things to talk about with locals when you’re in town: Australian horror movies.

Maybe it’s the weather, the insects or the isolation from the rest of the world (read: cabin fever), but there’s something about Australia that results in great horror films.

Though beautiful in many ways, Australia’s scenery is often harsh and dangerous, which perfectly lends this mood to film. Whether it’s the dark, impenetrable bushland, endless outback or a rotting suburban area, it’s easy for Australia to look creepy. Check out these 10 Australian horror films below.

Hounds Of Love combines the empty monotony of suburban life in Western Australia during the ’80s with a shocking story of abduction and torture. The result is nothing short of striking. With neat lawns, empty roads and blood-stained walls, the story feels too real to be fake, and that’s partly true. Though it may share some elements of real-life abductions from the area in the ’80s, director Ben Young didn’t pick one specific incident, but rather took inspiration from a number of different abduction cases. The reality may not have been like how it’s depicted in Hounds Of Love, but it’s terrifyingly close.

Wolf Creek is one of Australia’s most iconic horror films. Following the plight of a group of backpackers, Wolf Creek tips its hat to the murder and torture spree of infamous serial killer Ivan Milat, who operated in Australia between 1989 and 1993. While Milat remains behind bars, Wolf Creek no doubt had some tourists second-guessing their plans to visit Down Under, and rightly so.

The Babadook was a huge international success and put Australian director Jennifer Kent on the map. In fact, Australia slept on The Babadook, only picking it up after it was a smash hit internationally. The story follows a mother and son whose already strained dynamic is worsened when the monster and namesake from a pop-up book, Mister Babadook, is exhumed from the pages and begins to appear in real life. Full of jump scares, tension and dread, it’s utterly terrifying.

Snowtown may not fall perfectly into the horror category, but it’s shocking nonetheless as it’s inspired by yet another Australian murder spree. Committed between 1992 and 1999 by the hands of three men, they claimed 12 victims in total. The men justified their actions by viewing their victims as pedophiles or simply weak people. If that story isn’t unnerving enough, the bleak cinematography will get the job done. The overbearing silence in some moments—and knowing that help isn’t coming—conveys a strong feeling of dread and tension.

Read more: Horror movie, soundtrack and/or art fan? There’s a book for that

There are certain classics that should never be remade, and Picnic At Hanging Rock is one of them. Set in 1900, the film is doused in a texture that can’t be captured digitally. Aesthetic and tone aside, the narrative is simple but horrifying, following  a group of school girls who visit the iconic Hanging Rock landmark for lunch. Though warned not to venture into the daunting rock formation, it wouldn’t make much of a horror film if they didn’t. The film has a strong supernatural element and deliberately withholds information from the viewer so you share a similar sense of confusion and panic as the local townsfolk.

The secret to gripping story writing is creating a strong sense of place, and Van Diemen’s Land is a perfect example: Dark, damp and located in one of the most remote locations on Earth. Set in the thick Tasmanian bushland, Van Diemen’s Land tells the story of renowned Irish convict and Australian cannibal, Alexander Pearce. Pearce was part of a convict group who escaped their camp in 1822. Lost, cold and hungry, the group soon realize they only have one option for food—each other.

Read more: ‘Scream’ house is throwing a huge party this Halloween for fans of horror movies

Tasmania was scary in 1824, and it was still scary in 2008 when Dying Breed came out. While Van Diemen’s Land was somewhat historically accurate, Dying Breed more so plays to some silly stereotypes, dialing up to 11. As far as jokes go, Tasmania is rife with inbreeding on account of the small population and cannibalism, for some reason. Dying Breed leans into this, hard.

100 Bloody Acres will have you laughing while you’re also trembling in fear. A perfect submission of dark comedy, 100 Bloody Acres is self-aware and pokes fun at many horror movie tropes. That said, it’s completely messed up. The story focuses on a family-run rural fertilizer manufacturer who start using humans in their product. No detail is spared, no matter how gruesome. This one’s for people who can handle their gore, but there’s also a lot of soul and smarts.

Though technically considered a sci-fi drama, These Final Hours is absolutely horrifying. The film was an Australian take on the “end of the world” theme and nailed it. A meteor has hit the Northern Hemisphere, killing everyone and giving the Southern Hemisphere population merely 12 hours left to live. While the movie features the biggest party ever thrown, its horror comes from the feeling of isolation you share with the main character, the dead and barren scenery, the eerie silence that’s fallen over a whole country and the psychological floor routine it makes us all perform while we watch: “What would I do in this situation?”

Cargo began as a short film, but in the years after its initial release, it was expanded on as a feature-length. The story is a unique spin on a zombie pandemic and tells the story of a man, played by Martin Freeman (who nails his Australian accent, by the way), desperate to find someone to take care of his baby after the death of his wife and receiving a bite of his own. The relatable sense of fear and failure reaches out from the screen and rips at your flesh.