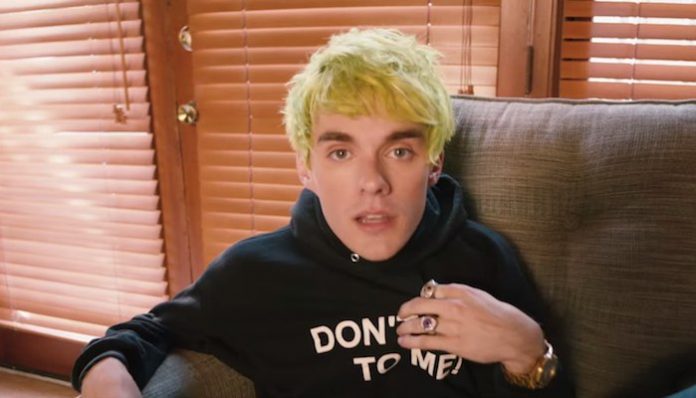 We’ve uncovered 10 of the most hilarious tweets from Knight from over the years that still make us laugh to this day. While it was hard to narrow it down, these tweets are true gems that deserve to be recognized. Check them out below.

Read more: Tony Hawk asks fans to text him and is actually replying

1. When he shared his unusual anti-theft strategy he keeps in his wallet

I KEPT THESE FULLY STAMPED, UNUSABLE SMOOTHIE KING CARDS IN MY WALLET FOR 8 YEARS SO IF SOMEONE STOLE IT THEY'D FEEL MY DISAPPOINTMENT TOO pic.twitter.com/c5wrrSN2ho

Knight shared the unusual thing he keeps in his wallet in case someone ever steals it—a Smoothie King card with a very harsh note written on it. The note reads, “FUCK YOU FOR STEALING MY WALLET YOU CHODE. ENJOY THIS UNREDEEMABLE SMOOTHIE KING CARD”.

Last year, Knight was locked out of his personal Twitter for 12 hours for tweeting about Jell-O two years earlier. The tweet read, “Sext: Pay someone to kill me and hide my dead body in jello. Buy a ouija board. Find the jello. We quote The Office back and forth forever.” We wish we were kidding about this.

3. When he got sexual with TGI Fridays

Back in 2016, the musician tweeted about wanting to go to TGI Fridays. The popular restaurant chain saw it and said they’d tread him “real nice.” Knight, of course, had to take it to the next level that was too ridiculous not to laugh at.

4. When he shared a screenshot of his ridiculous open tabs

I JUST LOOKED AT MY OPEN TABS ON MY PHONE IS THIS REALLY WHO I AM WHY AM I A PSYCHOPATH HAHAHHHAHAHAHA pic.twitter.com/v0DfVGcgxK

Knight shared a screenshot of some open tabs he had on his phone, prompting him to ask himself why he’s a “psychopath.” The three Google searches include him asking for Victoria Justice’s location, searching for a reason behind his cat’s moods and just “eggplant purple.” We don’t know what it all means, but it’s pretty hilarious.

If you go back to Knight’s pre-2014 tweets, it’s a pretty interesting place. In 2012, he hadn’t yet adopted his signature caps lock tweeting style but was still just as weird online. Exhibit A is this tweet where he just said his “butthole tastes like Dr. Pepper Cola.” Thanks for the info, Awsten.

6. When his friend convinced fans he was in Panic! At The Disco

A GIRL ASKED WHAT BAND IM IN AND ELIJAH SAID PANIC AT THE DISCO AND SHE WOULDNT LET GO OF ME 😩 https://t.co/pU4EiZNJNK

Knight’s friend and YouTuber/rapper Elijah Daniel apparently decided to start telling people that Knight was actually in Panic! At The Disco. Knight said that one girl “wouldn’t let go” of him when she was told the false news, which is pretty ridiculous to picture.

7. When he shared this unusual vision of what he wanted Waterparks to sound like

Sometimes, it can be hard to put a band’s sound into words, even for artists in that band. However, Knight described his aspirations for his band in an unusual way, but we sort of get where he’s coming from. He tweeted he wanted “WATERPARKS TO BE GOTH COLDPLAY THAT’S ALLOWED TO SAY THE FUCK WORD.” Honestly, it makes sense.

Read more: Awsten Knight accidentally wrote a book but the result is as real as it gets

8. When he ordered salmon at a Denny’s gas station for some godforsaken reason

WHEN I WAS MOVING TO LA, I WAS DELIRIOUS FROM THE DRIVE AND MY FRIEND WANTED TO STOP AND EAT AT DENNY’S. SO I WAS -TRYING- TO BE GOOD TO MY BODY BC THAT’S REAL CUTE OF ME AND ORDERED SALMON. LET. ME. JUST. SAY. THAT SALMON WAS WHITE AS A FUCKIN GHOST. BUT IT GETS WORSE, WAIT

SO I GET UP TO WASH MY HANDS AND LOOK TO MY LEFT AND IT’S A FUCKING GAS STATION. HIGHKEY I GOT FISH AT A GAS STATION/DENNYS HYBRID. I STILL TRIED TO BE A TEAM PLAYER AND EAT IT BECAUSE NOTHING CAN STOP ME BUT ME BUT TBH I COULD ONLY DO LIKE 3 BITES AND TAPPED OUT

The musician shared a story earlier this year about when he first moved to L.A. He was apparently so tired and wanted to eat something healthy, but his friend wanted to stop at Denny’s. Therefore, he ordered salmon, and it looked pretty sketch. He later realized he was at a Denny’s that was connected to a gas station. Honestly, we felt bad for him, but that would happen to Knight and Knight only.

9. When he was ignored by a fan at Warped Tour

The frontman shared a story about waving to a fan at Warped Tour wearing a Waterparks shirt who totally ignored him, and it honestly still makes us die laughing to imagine.

10. When his mom adorably supported his AltPress cover

WASN'T BLUFFING, MOM ORDERED 12 OF MY AP COVER AND THEY ALL CAME IN TODAY HAHAHAHAHAHHAHAHHAHAHA pic.twitter.com/3HvbxxPC57

When Knight graced our cover back in 2018, his mom wanted to show her support and ordered 12 copies of it. He shared a picture of her proudly displaying all of them, and it was both laugh-out-loud funny and cute.

What are your favorite Awsten Knight tweets? Sound off in the comments below!

Waterparks are featured as issue #376, which is available for preorder here or below.