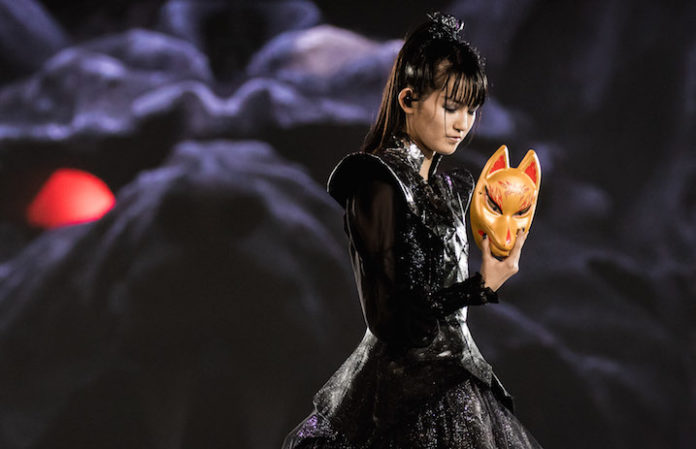 With two of their members still in their teens, BABYMETAL’s combination of J-pop overload, thrash metal rage, EDM slickness and opera-level dramatics have already left an indelible mark on alt-rock. They’ve had the Red Hot Chili Peppers as their backing band in North America. Their landmark release, Metal Resistance, set new watermarks for Japanese musicians on Western album charts. They’ve earned the imprimatur of Judas Priest frontman and metal luminary Rob Halford at the 2016 APMAs. Comedian Paul Scheer described BABYMETAL as “the power of Andrew W.K. mixed with the cuteness of Ariana Grande, covered in the sweat of Slayer.” One can argue that BABYMETAL have already achieved a level of visibility and popularity most bands only wish they could establish.

With one more year of touring experience under their belts, it was time for BABYMETAL to return home. More to the point, it was the right time for lead singer SU-METAL (Suzuka Nakamoto) to return home. “I was determined I wouldn’t return to my hometown in Hiroshima until I felt confident enough to feel that I grew as an artist and as a person through various experiences,” she says to AP via interpreter. “So to be able to return to my hometown at this special age was absolutely a significant moment for me.”

The special age SU-METAL is referring to is her 20th birthday, this Dec. 20. In Japan, one’s 20th birthday represents the arrival of adulthood. “It means the ‘coming of age,’ which in other words, means that you are officially an adult when you turn 20,” SU-METAL says. “In the past, many people have supported me and have helped me get to where I am today. Now that I am 20 and officially an adult, I feel that it is my duty to give back to all the people who have been supporting us and hope I can be a figure who can give people power through my singing.”

The cutester/aggro trio—SU-METAL, YUIMETAL (Yui Mizuno) and MOAMETAL (Moa Kikuchi)—wrapped up 2017 on a high (and loud) note, performing two nights in SU-METAL’s hometown of Hiroshima, Japan Dec. 2 and 3, to an audience of 7,000 each night. Titled LEGEND – S – BAPTISM XX, the event served as a conclusion to the sixth chapter of the Metal Resistance mythos. (YUIMETAL was absent from the performances due to illness.) While Western audiences may have initially dismissed BABYMETAL as a novelty combination of My Little Pony sweetness and high-decibel fury, one cannot overstate the level of enthusiasm the trio have generated in their home country. The two nights in Hiroshima weren’t simply performances; they were spectacles on a level rarely seen outside of six-figure, big-budget arena affairs. BABYMETAL sang, screamed and danced to a backdrop of giant kitsune heads (Japanese for “fox,” a recurring image in the band’s mythos). MOAMETAL scrambled across the stage as inferno-level pyrotechnics detonated, and masked “servants” appeared to herald the arrival of SU-METAL. The evening’s laser show could easily have doubled as a landing beacon for any local aircraft had the performance been held at an open-air venue.

The assembled audience—dressed in kitsune masks, oversized medallions and ominous black hoods (“three sacred treasures” given to each attendee)—seemingly gained strength from each riff supplied by the Kami Band and the onstage exhortation from SU-METAL, while remaining eerily silent during the night’s narrative interludes. The crowd’s seemingly synchronized responses to the music was so uncannily precise one could mistake it for a choreographed sequence, but the chaotic mosh pits on the main floor exuded a level of sincere enthusiasm rarely seen in such a mega-show setting. And in a brief-yet-candid moment following the second performance, SU-METAL greeted a small group of family members and local friends.

Although this event may sound like SU-METAL passing the torch and heading off to the sunset, the Hiroshima performances revealed otherwise, as her enthusiasm serves as a beacon to those who would like to pursue their own passions. Furthermore, SU-METAL considered the performances a practical opportunity to sharpen her skills. “This performance was a one-of-a-kind performance which was more like a musical rather than a concert,” she says. “Because of this, I was able to experience something I’ve never done before, and so my focus was on making sure I was thorough with each individual song on the setlist.”

Although SU-METAL and her cohorts have established themselves on the live circuit with poise and confidence normally associated with their elders, BABYMETAL still maintain a level of unadulterated enthusiasm for music, as SU-METAL herself recalls during their time on the road with the Red Hot Chili Peppers and Metallica, among others. “This year when we toured in the U.S. with the Red Hot Chili Peppers in April [2017], we were approached if we’d be interested in a collaboration for the last show,” she recalls. “At first it was Chad [Smith, Peppers drummer] who joined us in December 2016 onstage, but this past April, more members of the Red Hot Chili Peppers joined us, and it was just an unforgettable experience. What made it even more special was that they performed our song! [“Gimme Chocolate!!”]”

BABYMETAL are currently preparing for the eighth episode of the Metal Resistance mythos, but SU-METAL herself can’t wait to return to the live setting to further engage (and in some cases, confound) new audiences, as seen in any of the “YouTube Reacts To BABYMETAL” videos online: “I think there are a lot of people still waiting to see us in different territories, so I would like to visit those areas we’ve never been before and meet them!” alt