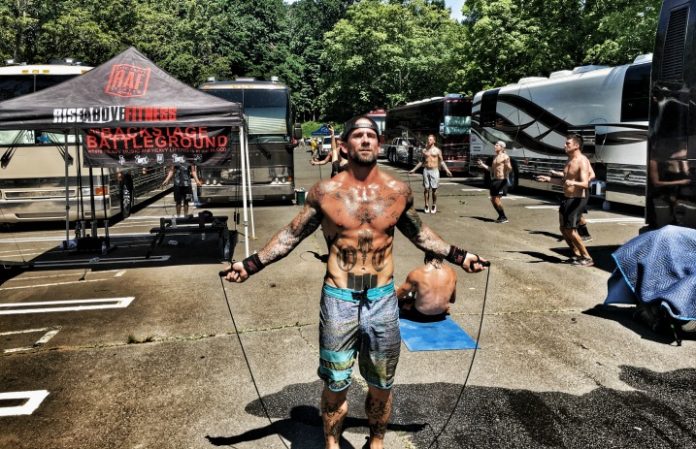 Brandan Schieppati is the frontman for metal band Bleeding Through. You might better recognize him wearing all black or from one of the band’s gory music videos. However, Schieppati has turned over a new leaf, going from blood-curdling screams to barbell curls at Rise Above Fitness—his business and gym based in Huntington Beach, California. Rise Above Fitness is all about heavy music, heavy lifting and a heavy attitude: “I’ve kinda realized I can make a difference in people’s lives, and I can make people, like me—with tattoos, who listen to heavy music that maybe don’t really have sports background—confident and want to be in shape.”

Schieppati’s love for fitness started with high school sports. His passion quickly redirected toward music as he started playing guitar for a band called Eighteen Visions, before his career with Bleeding Through. “Once I started touring, sports didn’t really have a place for me because music overtook that. So I started working out on my own—not because of a sport,” Schieppati says, recalling the release it brought, along with scrutiny from friends for trading late night parties for early morning workouts. This became routine. It helped him through touring, coping with bipolar disorder and provided overall mental clarity.

Although Schieppati had been getting more serious with exercising, he says he saw a picture of himself after a trip that wasn’t quite representative of the fitness level wanted to be at. “The older I get, the fitness level I’m at isn’t acceptable anymore,” Schieppati explains. So he called up a buddy who played in Major League Baseball, linked with his trainer and did a complete 360—furthering his fitness endeavors and knowledge. “He gave me confidence,” says Schieppati, “and it’s so much about confidence.” His first day in the new gym, Schieppati was surrounded by athletes from the LA Kings and Chester Bennington (singer of Linkin Park) working out. “This is me, a total music, punk-rock jock,” he says, “I remember walking in that day and saying ‘This is what I’m going to do after Bleeding Through.’”

He began by interning with his trainer, working on client programs for athletes and musicians. After a failed business attempt, Schieppati took his experience into his own hands: “I was driving away from the gym and I said ‘I need to name it.’ I had my iPod on shuffle and ‘Rise Above’ by Black Flag came on and I said ‘Dude, that’s the name of my gym. That’s it.’” He wanted to be the punk rock of exercising. For Schieppati, part of the fitness allure was the basement culture aspect. “At the time, fitness was very pretty,” he says. “The guys were un-tattooed, perfect—perfect white teeth, bleach blond hair. And I remember saying ‘I don’t relate with this person and I know a lot of people turned off to fitness because of these people.’” The product of a cultural re-invention of fitness? Rise Above Fitness. His company has been open for about five years, and Schieppati compares the gym to the “underground punk scene” of the fitness industry. Rise Above Fitness is all over Instagram and Twitter, and the company has branched out into a fitness apparel company as well. Badass slogans like “One nation, under iron” can be found on T-shirts and tanks alike.

Now, fast forward to this year’s Warped Tour. When pitching the idea to Kevin Lyman, Schieppati said: “I see my company as the punk rock fitness company, and your tour is the quote un-quote punk rock tour,” he continues. “So the correlation was there.” The two were like Sid and Nancy. After debuting on select dates last year, Schieppati and his team landed the full-time role as the summer’s go-to trainers. Rise Above Fitness has its own tent, hosting parking lot workouts for the bands to stay toned while touring. “It’s open to all bands, crew, working members, vendors, people that work the catering—fucking security guards can get in there,” Schieppati says. He’ll also be teaming up with The Entertainment Institute (TEI) for fitness and nutrition workshops during Warped’s California dates.

Now that you’re familiar with Schieppati and his underground mission, we decided to debunk some fitness myths and clear the air about lifting misconceptions.

CLEAN DIET OR COUNTING YOUR MACROS: Clean dieting. “Macros allows you to be lazy,” Schieppati says, “Because you’re like ‘Hey I’m still allowed 70 grams of carbs so I’m just gonna eat fucking donuts!’ It gives you too much of your own rope and most people aren’t disciplined enough.”

DEADLIFTS/SQUATS WITH OR WITHOUT A LIFTING BELT: “That’s so much about feel,” Schieppati says. Although, all his 1RM’s (one rep maximum) have been belt-less. “I’d say don’t get to a belt until you have confidence in your core stability to be able to push weight.”

PROTEIN SHAKE OR STRAIGHT TO A MEAL: “I’m gonna have to go protein shake because most people don’t have the discipline to eat right after,” explains Schieppati. “If you have a shake you can get that protein in and those nutrients right there.” But Schieppati emphasizes the importance of having a meal ASAP after a training session: “I mean, can I say protein shake and a meal?! How about protein shake on the way to eat a meal.”

DEADLIFTING/SQUATTING WITHOUT SHOES: “I choose to wear Chuck [Taylor’s] when I dead, or whatever flat shoes,” he continues, “And squatting I would prefer shoes. But I would prefer either flat shoes, because you want that pressure point center of gravity, or Olympic/squat shoes.” He says he’s not a fan of barefoot lifting, but his trainer used to train barefoot and was pulling in the 700’s. So do your research as to what will work best for you.

INDOOR/OUTDOOR WORKOUTS: Indoor. “On Warped Tour, obviously we’re outside and it’s cool, but I like the feeling of being inside,” he says. “There’s more of a vibe, I guess.”