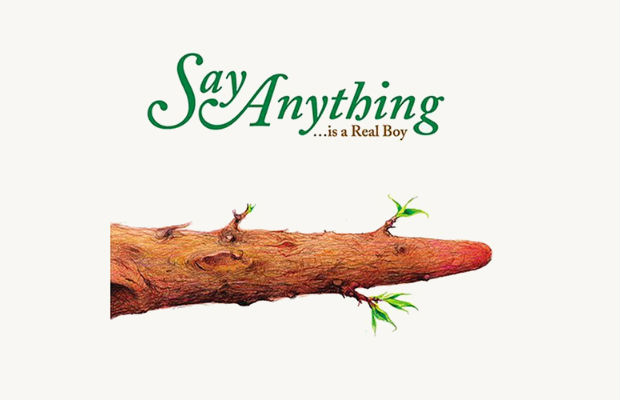 In this recurring column, we discuss the backstories of some of the scene’s most resonant songs with the people who made them. In this installment, Brittany Moseley spoke to Say Anything frontman Max Bemis about “Alive With The Glory Of Love.”

Everyone knows what happened after Say Anything released their “official” debut album, …Is A Real Boy in 2004. Things got steadily worse for the band’s dynamic frontman, Max Bemis, who was diagnosed as bipolar that same year: Drug use, manic episodes, too much partying all culminated in a stay at a mental hospital, and eventually the band’s sophomore album, In Defense Of The Genre. But the period before that was just as important in shaping the trajectory of Say Anything.

“At the time, I had just dropped out of college, and I was floating around, trying to put together my career,” recalls Bemis. “I was just drifting from friends’ houses to different relatives’ houses and writing about my experiences feeling really lost.” One experience became the inspiration for “Alive With The Glory Of Love,” the token hopeful “love” song on an album that explored all the dark corners of Bemis’ psyche.

“Alive With The Glory Of Love” is loosely based on your grandparents’ experience in the Holocaust. How did that inspire the song?
I think I’ve always been fixated on the Holocaust as a third-generation survivor. I became aware of it at a really young age, so it was ingrained into my psyche as, “This is the real knowledge of what happened there.” It was very present for me as a kid, and as I grew up, it was still there. The fact that [my grandparents] went through it was the basis of it, but there was a lot that contributed to the song that didn’t have to do with them. It was more about me and what I was going through at that time.

How did you take your family’s history and your own experiences and combine them into the song?
I met a girl and had a semi-fling with her. It inspired me in this period of deep loneliness and existential angst and unrest. A lot of what …Is A Real Boy is about is the pressure of society and how it can drag you down and make you hate yourself and do things you regret. But I saw a glimmer of hope in this girl, and it just reminded me of the ultimate story of finding a connection, or finding hope in a terrible circumstance, like, somewhere where there’s genocide or something really horrible going on, versus just a depressing society or depressing circumstances. So, I went to the ultimate depressing [topic], which is the Holocaust, and I placed myself there and thought about my grandparents a little bit, obviously. I was like, “What would it be like to have a crush on someone or to fall in love during the Holocaust?” So it was more of my circumstances and a lot of the same existential confusion that produced the rest of the record. By the way, nothing really ever came [of the fling]. I never really talked to her much again. But at the time, it felt like such a glimmer of hope because I felt so empty. All of my sentimentality poured out into this song, and I just remember writing it and feeling so validated by being able to feel that way, despite how crushing and numbing everything else felt at that time.

Did the song change much between the time you wrote and the time you recorded it?
No, it didn’t, actually. I completely envisioned the way it was going to turn out. I wrote it, we did a session of demos, and it sounded pretty similar. Obviously, Tim O’Heir took it and made it amazing, sonically. It kind of came alive more in that regard. We kept improving on it sonically, but nothing changed lyrically in the structure. It kind of is what it was. It was one of the first times I had this feeling after I wrote a song where—forgive me for saying so because it does sound conceited—I was like, “Okay, if my band’s going to do anything, this song is probably going to be a big part of why.” It was that feeling like, “You wrote a good one.” Maybe it was just self-actualization that it did become one of our more successful songs—and still is one of the hallmark songs. >>>