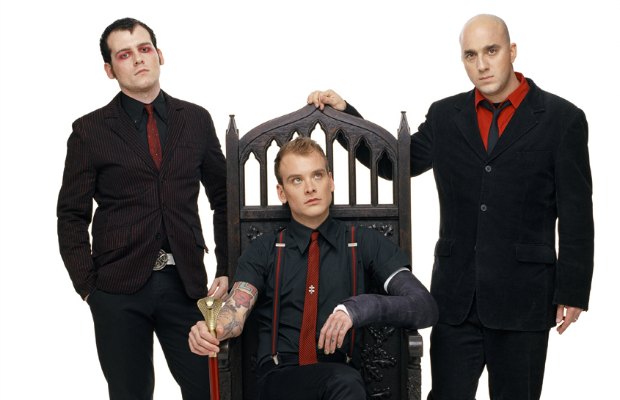 In this recurring column, we discuss the backstories of some of the scene’s most resonant songs with the people who made them.

Alkaline Trio’s Crimson just celebrated its 10th anniversary. It was a breakthrough album for the band and saw them delving into sleeker production and darker theatrics all culminating arena tours and late night talkshow performances by the end of 2005.

AP caught up with vocalist/guitarist Matt Skiba the day before the special anniversary (which happened to coincide with World Goth Day) for a backtracking session about the album’s powerful debut single, “Time To Waste.”

How does it feel looking back on Crimson on its 10th anniversary?
MATT SKIBA: It’s pretty crazy that that was 10 years ago. It’s gone by really quickly. I think that’s a good thing. I know it’s a pretty cliché thing to say, but it really does feel like just yesterday that we were doing artwork for it. It’s definitely one of my favorite records. We’re in Orlando right now, and we’re doing a series of shows where we’re playing all eight of our records, and tonight we’re playing Crimson. In doing all these Past Live show, Crimson is one of my favorite records to play.

Have the songs taken on a new life for you over time? Do you think of them differently when you’re playing them now?
I think we’ve gotten better at playing them since we’ve had ten years to do it. It’s a really fun record to play, and it was the last record that we got to do with Jerry Finn, who mixed one of our records and produced three of them, and we became very good friends with him. So when he passed away, that was a big, huge blow to a lot of bands, including us. So, I’m really honored that we got to have that time with Jerry and spend that time in the studio making music with him. That being the last record we made with him, there’s something extra-special about it.

For a lot of people, “Time To Waste” was their first introduction to Alkaline Trio. Did you think at the time that any of the songs on the album would have that crossover impact?
I would be lying if I didn’t say that we always hoped for it. We’re very lucky that we’ve always worked with labels for whom we never had to write a single. Once a record starts taking shape, we just try to write the best songs for that record, whether or not radio [will like it]. Of course, we want people to like it, and the more, the merrier. We didn’t expect it, but we certainly did everything we could to make the best record in our power. We’ve always done that. But I really feel with Crimson—especially with “Time To Waste” being the lead-off track and the first single—it’s a huge song for us, and we weren’t expecting that, but we made a video for it and had a lot of people digging it, and we’re lucky that they did.

That video was directed by Joe Hahn of Linkin Park. What do you remember from the video shoot? Those awesome classic cars, the hangar…
It was, yeah. Those beautiful cars… Getting to drive those things around was a lot of fun. We shot that video in one the Howard Hughes hangars in southern California. Howard Hughes is really fascinating to me and somewhat of a hero of mine, so it was really cool. It definitely had this kind of haunted feel in that place in a really inspiring, cool way. The making of that video was really, really special.

Speaking of a haunted feel, Crimson was part of a somewhat darker age of Trio. There was always that level of darkness in your music, but it was especially prevalent in the imagery at that time. What inspired those aesthetics?
We grew up on, primarily, the Cure and bands like Sisters Of Mercy, as well as industrial stuff like Ministry and Front 242. There are so many bands like Bauhaus, Joy Division and the whole “goth” movement has always been a key influence for all three of us.  I’m not necessarily saying that we’re carrying that torch, but we’re definitely influenced by it. Always have been and probably always will be.

The lyrics of the song are pretty abstract, could you give us insight to the meaning behind it?
The meaning behind it is actually addiction. I wrote specifically about a friend of mine who was going through a methadone treatment to get off heroin. That’s what inspired that song. My friend’s plight is what influenced me to put pen to paper, but I think it has a universal meaning. I think we all—drug addicts or not—have instances in our lives when we feel like we could or should be doing something better, or we have people looking at us and judging us thinking that we should or could be doing something better with our lives—whether ourselves, our parents, our peers or whomever it may be. Living life to its fullest and lacking the ability to do that is what that song is about.

How does the song rank for you in comparison to the rest of Crimson?
I think you always put your best foot forward. There’s always been this formula, which I’m sure you and many of your readers will know, that you have a lead-off track on the album and then it’s always sort of been the formula to put the single as the third song. For us, since we’re not really trying to write a single, it’s like we want to set the tone for the record, and in putting our best foot forward, we put the strongest song first on the record: What’s the song that’s going to catch people’s attention and get them interested in the rest of the record? I’m not saying that “Time To Waste” is necessarily the best song on the record. I just think it’s the most [representative of] the rest of the record. I think there are elements of everything else in that album within that song. You don’t know you have that until you’re done with the record. It’s hard to pick a favorite song. I usually leave the order in which the songs appear on the record up to my bandmates or the people that work closely with the band. We always work with people that we trust. With Crimson and with “Time To Waste,” we loved that whole concerto beginning to lead off the record. We realized pretty early on that “Time To Waste” was going to be the first song, and I think that for whatever reason, it has a power to it that made it a better lead song than anything else on the record. It’s not necessarily the best song, but it’s the best first song, for sure.

Is there any specific memory you have tied to the song? Any things you remember people saying to you about it?
Most people bring up the line “hide the cutlery” as being… It’s funny. A lot of the lyrics in our songs, people think that I make them up. Like, [the opening line of “Radio,”] “Shaking like a dog shitting razorblades,” and I didn’t make that up. It’s a term that people used for shellshock. It’s something people would say in trench warfare through the years. And “hide the cutlery,” that’s just a line about when I was a kid, I watched this story on television about a kid who murdered his family and did so while he was sleepwalking. As a teenager, when I started experimenting with drugs, I had this horrible paranoia that I was going to kill my family in my sleep. I had all kinds of art supplies in my room—X-Acto knives, scissors, all different sorts of cutlery—and I would put it all in a drawer and lock it. That’s where the line “hide the cutlery” comes from. People always mention that line to me, like, “Hide the cutlery?! How did you-?” It’s such a weird image and so specific to people that they all seem interested in it.

I’m glad you never sleepwalked and killed your family.
Oh, I did! But I was sleeping, so they had to let me go. ALT