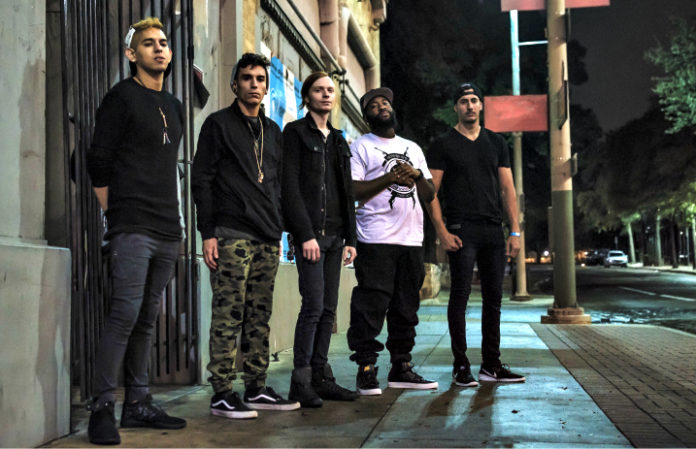 Escalating political and social issues have caused a rise in impassioned responses, heated debates and both violent and nonviolent protests. Some bands in the punk, hardcore and alternative music scenes are retaliating with their art, but BackWordz have a unique take on how we as a people should deal with our current problems. The core of this band’s philosophy comes from the Libertarian viewpoint of being “anti-state.” In case you’re not familiar with Libertarianism, frontman and vocalist Eric July has taken the time to answer some questions about the cause and about the band’s brand new single and music video, “Self Ownership,” from their upcoming album Veracity out  March 31 via Stay Sick Recordings. Fronz, head of Stay Sick, entered into a deal with the band that is significantly different from the usual record-biz machine way of doing things. Will your mind be changed after hearing what BackWordz have to say? Only one way to find out…

BackWordz refused other label deals until Stay Sick came along. What makes this partnership so different?
JULY:  We had little to no desire to sign a deal, and this was a part of our vision long before we put out our first song. Though some of these record deals are pinned as “industry standard,” from a business standpoint, they make absolutely no sense and the artists are being shafted. But we treat BackWordz as if it’s a business and a brand. The guys involved with Stay Sick respected our direction and grind. So we worked together to come up with a way to team up, rather than signing a standard deal. For example, we own our publishing, control our own vision and spend a lot of our own money as opposed to having the label handle [those things].

FRONZ: I’m very excited to watch things unfold this year for BackWordz. I was initially drawn to their music because I could feel the energy from a mile away. I knew that this wasn’t an ordinary metal band; this is a band fueled by relentless passion, and I saw the fire in them. It’s rare to find bands as unique as BackWordz, so I knew they would make a great fit on Stay Sick Recordings. When Eric showed me the ideas he had for “Self Ownership,” I gladly jumped onboard for the collaboration and the song turned out amazing. Everyone needs some BackWordz in their lives right now!

Your new song and music video, “Self Ownership,” are highly political. Given the song’s title, what message are you trying to get across with this one?
JULY: “Self Ownership” is a core libertarian principle. If people came to terms with the fact that they own themselves, this will nullify many gripes and complaints. In the song, we highlight how seeking the help of politicians and government is not only the antithesis of self-ownership, but it’s utterly foolish. But all too often, people feel as if change has to come through the same entity that caused the problem: the state.

The US. is in an extremely turbulent political and social period right now. What are your opinions on the new presidency?
JULY: Donald Trump sucks, but we don’t really buy into the whole “He’s the next Hitler” narrative. This type of silliness is why Donald Trump got elected. Meanwhile, Obama bombed more countries than Bush, added more to the debt than any other president, but he gets a pass from many of the individuals that are being dramatic over Trump. The bigger problem lies in the fact that a position like the presidency even exists. It inevitably attracts some of the most cruel and corrupt individuals, so let’s get rid of it.

The video follows a man who works for city hall and ultimately confronts the protestors outside. What was the importance to you of setting up this dialogue? Do you think there is an inherent problem with the way certain people are protesting right now? If so, what would be your ideal solution?
JULY: This portion of the video summarizes much of our views surrounding these heated discussions of racism, police brutality, etc. Many of the protesters only acknowledge the symptoms, which does nothing—wanting to slap Band-Aids on the wound, ignoring what caused it. So they march for “reform” and expect the agents of the state to follow a new set of rules, when they already disregard the ones in place. So rather than focusing on victims, folks should start asking questions that address the problem. Why do they have the authority to do this? Are these positions really necessary? Are my voting habits partially to blame?

“We hope to get individuals thinking about alternatives that they’ve never considered, or been exposed to.”

What do you think is the biggest issue we face as a society right now? What do you think your role in that is as part of BackWordz and as an artist?
JULY: The lack of critical thinking is the biggest issue. Many people accept things as is without even considering alternatives; they groupthink. Consequently, this has led to the undermining of private property rights, self-ownership and non-aggression. Music, especially in our sub-genres, lacks this message. This is apparent because we’ve come under fire due to some of our lyrics. But this is what it’s about. We hope to get individuals thinking about alternatives that they’ve never considered, or been exposed to. If I can do a show in front of 500 people, but one goes home and takes the time to at least research some of the topics we’ve covered, I’ll take that as a victory. The message is the backbone of BackWordz and without it, there is no BackWordz. ALT