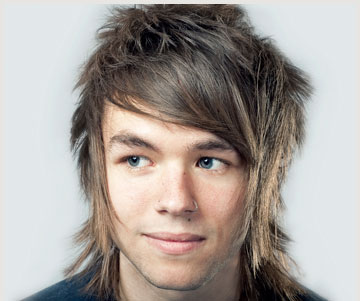 Julie Ciccarelli, winner of our Bamboozle California guest reporter contest, caught up with JORDAN WITZIGREUTER of THE READY SET at the festival in Anaheim, California.

You recently signed to the Sire/Decaydance family. What was that experience like?
Jordan Witzigreuter: Signing was awesome! It was a very long process of getting everything set up… I was going back and forth between labels, trying to figure out what I wanted to do. I think I definitely made the right choice because they’ve all been amazing to me and super helpful, so it’s been awesome.

What was recording the new album like?
The process for the new album was very spread out. I recorded some of the songs a year ago. I recorded out in L.A. with three different producers, I even went and did some stuff in Miami, Atlanta, and a bunch of different places. It was kind of sporadic and weird, but I think it came together really well.

Is there a particular track you’re excited for the fans to here?
We’re actually playing it [at Bamboozle California]. The first single off of it is called “Love Like Woe” and it’s out this week on iTunes and the video the day after that. The whole album is a lot more poppy than it’s ever been with huge sounding songs. It’s a lot of fun, really upbeat.

What was filming the video like?
Filming the video was really long. It was like a twelve-hour day, just jumping around. Very, very tiring, but it was definitely worth it. There’s a lot of really cool cameos in it.

You’re playing the Bamboozle Roadshow this summer. Who are you looking forward to playing with?
It’s awesome because we’re friends with a lot of the bands on the tour, like Boys Like Girls, All Time Low, Mercy Mercedes, and Stereo Skyline, so it’s going to be a huge party. I’m really excited to hang out with those guys every day. alt

10 memes that are entirely taking over Halloween 2020