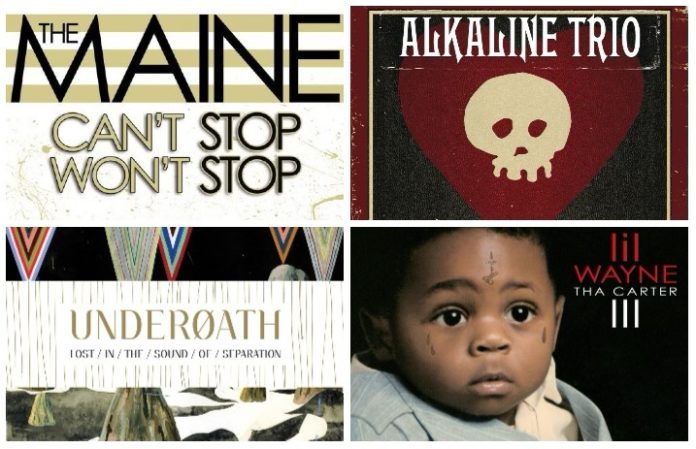 Can you name an album off the top of your head that came out in 2008? Let alone what your favorite was?

We put a ton of your favorite bands to the test and asked them just that. And these are the albums they chose.

“Alkaline Trio’s one and only major label record, Agony & Irony. When we went in to record Set The World On Fire, I had been chasing the sound of Agony & Irony. 'Over And Out' is one of my Top 3 favorite songs, ever.”

“Antidotes by Foals. I was at university, and I remember it was their real breakthrough album as a band. I think they definitely brought this really fresh, exciting guitar thing to the UK indie scene that no one was doing at the time. I’m a big fan of math-rock stuff, interesting time signatures and stuff that keeps you on your toes a little bit. I love pop music. I love simple songs, too, but I definitely like to be challenged. For me, they had this perfect blend of catchy melodies and guitar parts where you’ll be singing along to the guitar parts. It’s not a riff. They weren’t a heavy band. They’ve gone a lot heavier now; back on that album they weren’t particularly heavy, but the parts were just so catchy. They almost could have been an instrumental band. I think it captured this time because [the television show] Skins had just come out, and I think that they were one the main songs on Skins. It felt like it was part of that wave, when you’re growing up a little bit, discovering more challenging music and, then, the fact that Skins had just come out and [had] all these kids getting drunk and taking drugs. The main single off that, “Cassius” is just pure math-rock/pop gold for me.”

“Copeland, You Are My Sunshine. They’re one of my favorite bands, and it’s a very unique record. They tried some different approaches on the songs, [and] they’re a little more laid-back. They’re a laid-back band in general, but that record was even more on the laid-back side. But I think that’s a really unique record in the way that it sounds.”

“I would say my favorite album from 2008 would be Pretty. Odd. by Panic! At The Disco. I think that’s my personal favorite of theirs. I know that album is a lot different from the rest of their catalogue, and I know for a lot of people it might be the album that they weren’t as into maybe, or it doesn’t really sound a whole lot like the rest of Panic! At The Disco, but I thought it was just such a cool vibe. For a band that young on their second album, to branch out that far with a very ‘60s rock, Beatles-influenced feel… Really awesome songs, really cool production and put together really well.”

“City And Colour, Bring Me Your Love. From the first listen, it blew me away and became my soundtrack for that entire year. I still love it now.”

“I went back and looked at what I was listening to because that was the year I graduated high school, so it’s pretty fresh in my mind. There were three records that came out that year that I loved. Forever The Sickest Kids’ Underdog Alma Mater was one of them. I specifically remember driving to Cornerstone Festival and just listening to that on repeat and being like, 'What is this? This is so weird and so cool and catchy.' And I think all of my friends hated it, so that was pretty awesome. I love that record, very nostalgic. Then there’s a record by a band called Edison Glass, called Time Is Fiction. That was a really great record from 2008. And Copeland’s You Are My Sunshine also came out that year, which blew my mind. They’re all pretty different, but I think those are three that definitely still stick with me that I love to this day.”