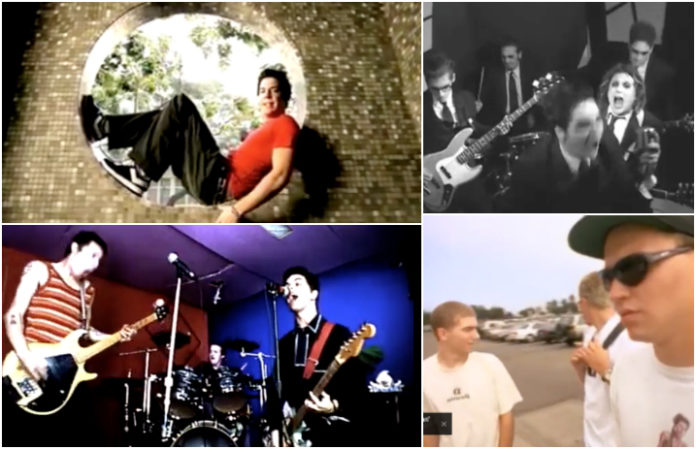 Sometimes it takes a few albums for a band to acquire a cult following. Other times, their very first single sends them off to tour the entire planet. The first music video a band decides to shoot a music video for is a very important choice to make.

Unless one checks out a band because they somehow know them personally, or they're opening for a band they actually want to see, it is usually a music video-accompanied single that captures the attention of new listeners. Of course, the music is primarily the dealbreaker, but the way bands present themselves in music videos (which can include how they play, what they look like and even how well the video was directed) definitely plays a role in the brains of new listeners as they decide whether or not to keep listening. While some got it right on the first try and others are barely identifiable, here are some of our favorite bands' very first music videos from the 1990s or early 2000s. Feel old yet?

The montage video sets a precedent for this list. However, the unique usage of rewinded footage (2:37) was definitely ahead of its time.

How surprised are you that Simple Plan’s first music video was a high-school setting and included the guys all trying to impress one girl? And that they all end up getting rejected and embarrassingly hurt? And that Tony Hawk makes a cameo? Neither are we. Posi jumps in the high school gymnasium get extra pop-punk points.

Is there a pattern here? To be fair, GC beat SP to it. This song is a strong representation of the music scene as it is dedicated to “every kid who ever got picked last in gym class, every kid who never had a date to no school dance and everyone who’s ever been called a freak.”

”Vampires Will Never Hurt You” by My Chemical Romance (2002)

Much more heavy and raw than The Black Parade era, MCR’s first album was filled with dark goodies such as this one. Besides this epic song solidifying the association between the band and vampires, it also demonstrates their theatrical passion for dressing up, which stayed with them throughout the years.

Another compilation montage; we can’t get enough of these. Those drum kit firework sparklers are badass! They certainly complement the synchronized onstage dancing. This video also makes us want to rob a pizza place with water guns. Looks like Sum 41 are the pioneers of the high-school-setting on this first music video list, unless we’re forgetting someone.

It certainly makes sense for the Jacksonville, Florida pop-punk quintet choose a song that describes their leap of rock star faith as their first music video. The song describes how it felt to move way away from home to Southern California to follow their dreams. The video shows singer/songwriter packing up his bags for the move while playing with the rest of the band in other shots.

No better way to embarrass your high school frenemy than to write a bitter anthem directly calling them out. The lyrics are not subtle in the slightest: We are basically walked through this entire part of Andrew McMahon’s high school career, with names, locations and the honest truth.