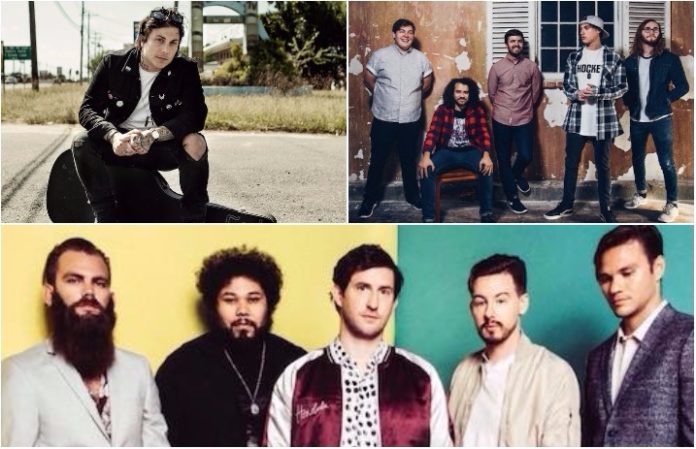 From piano recitals to playing in front of 2,000 people, every band has to start somewhere. Some musicians are still embarrassed over the first time they ever went on stage, others just laugh it off. Whatever the feeling, one thing remains: Don't look up footage of a band's first show.

Read more: 9 musicians share something that no one would ever guess about them

Josh Franceschi, You Me At Six

“Our first-ever live performance was at Gilford Community Center. It was a floor show. It was essentially us and two or three of our mates bands playing. Matt actually had a picture of us playing that show. It's brilliant because me and him looked like absolute twats obviously, and I did this thing for many, many shows where I couldn't bear the idea of facing the audience, so I just stood with my back to them, or I stood side on, and it's really weird. But that was a funny show, actually. And that was even before Dan was in the band as well.”

“Our first Champ performance ever was in a basement, a tiny little basement in Albany, New York, where we come from. It was just like a party of some sort and a bunch of local bands played and it was our first show ever. We had one of our first practices the day before, and we didn’t have a name yet, and that’s actually why State Champs is our name, ‘cause the night before that show, I had a party at my house for the girls basketball team of my high school that had just won a state championship, and that’s how it came apart, like everyone yelling 'state champs' at the party and stuff. We’re like, 'Wait a minute, we need a name for this show tomorrow, this could work!' And whether or not it was the best choice, I don’t know, we stuck with it seven years later so that’s that.”

“The first would be piano recitals and things like that. When I was about 11, I sat in with my grandfather’s jazz band and played drums on a song. That was crazy. Then, my first full show when I played guitar and sang, I was maybe 13. I was a freshman in high school, and I played the junior dance at the high school. But I wasn’t old enough to be at the dance, they said, so I had to play, then I was asked to leave. So, it was very early on that I realized musicians don’t get any fucking respect. [Laughs.] 'I know we’re not paying you, but can you also leave? Just get the fuck out of here?'”

KARLSSON: “For me, it was in Seattle with Asking Alexandria. It was interesting because everything that could go wrong went wrong, and it was late and it was just kind of like 'go out and play' and we did.”

SEBASTIAN: “Our very first show before Jolly was able to tour with us was in front of 2,000 people in Minneapolis on the Sumerian 10 Years Tour, and it was very nerve-wracking because it was our first day on the tour and it was a 2,000-cap room full of people and it was intense but it was fun. It was great.”

Quistad: “The Omega Zone in Eustis, Florida. It was a rundown skate park in a shopping mall and there was one light in the whole venue. We played probably second and I don’t even think anything was mic'ed. We just played this big, open room, and we were called Empires. It was cool. We did it.”
Bond: “Don’t look that up, please.”

Landon Tewers, The Plot In You

“Mine was in a coffee shop, and I think we were the only band that ever screamed in that coffee shop. It was super embarrassing. Everyone looked at us like, 'Please get the fuck out of here.'”

“Our first show was October 2012 with Hawthorne Heights. We were fortunate enough that we got a friend from back home who put on the show and he gave us the opportunity to have our first gig as Moose Blood supporting Hawthorne Heights, which was a bit mental but a good way to start.”

MINGUS: “We played at The Underground in Roseville, California, in 2005, and Jon was sick and he couldn’t make it.”
SWAN: “Our friend Drew Winters, he had a total death metal scream. He was in a death metal band, and he didn’t know our songs, and he just ad-libed over everything and it was awful.”