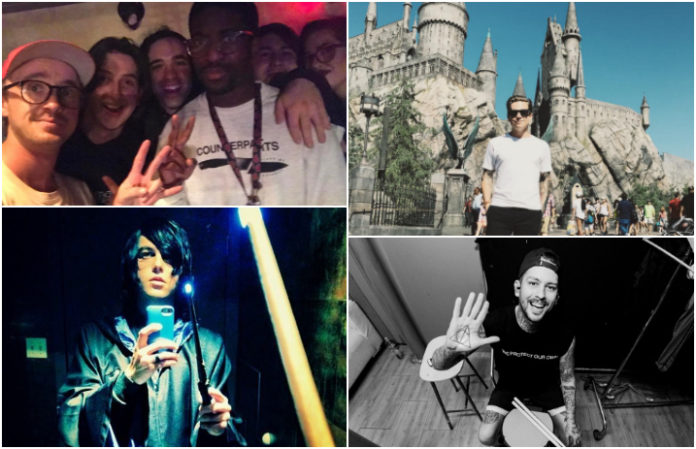 The scene has shown some serious love for the Harry Potter world, and in honor of Harry Potter and the Sorcerer's Stone’s 20th birthday, we decided to compile some of our favorite moments that prove the scene’s love of the wizarding series.

Take a peek at the songs, tattoos, snare drums and more below!

Read more: QUIZ: Which Hogwarts house do you belong in based off your music taste?

With Confidence stand up to fear itself with their track “Voldemort”

With Confidence’s hit “Voldemort” clearly holds a reference to the wizarding world, and frontman Jayden Seeley says the track is inspired by the name Voldemort itself. “‘Fear of a name only increases fear of the thing itself.’ Voldemort is my personification of mental illness and this song is a big, happy and carefree fuck you to Voldemort.”

Harry Potter fans will recognize From First To Last’s reference to J. K. Rowling’s magical series—and the Marauder’s Map reference. The map first appears in the third book of the series, Harry Potter And The Prisoner Of Azkaban, and in order to reveal the map, you must vow, “I solemnly swear that I am up to no good.”

It was an overwhelming spiritual experience walking through the actual courtyard of Hogwarts this morning. For those of you who know me, you can only imagine the tears I was fighting back. ��: @gavfrontrow #hogwarts #harrypotter @durhamcathedral

Broadside's Oliver Baxxter is a longtime fan of the series—whether he's walking through the courtyard of the actual Hogwarts or celebrating the release of their new album, Paradise, with a season pass to Universal Studios to visit The Wizarding World Of Harry Potter as often as he pleases, there's a good chance Baxxter has a butterbeer in his hand.

Tom Felton is a fan of Movements and Silverstein (and they’re fans of him, too)

Whether or not you were a fan of the Slytherin House, it’s clear that Tom Felton has good taste in music. He was spotted at The Commodore Ballroom in Vancouver during Good Charlotte's tour stop with Silverstein, Palaye Royale and Movements. The actor snapped pictures with both Shane Told of Silverstein as well as Movements, and both featured the special guest on their Instagram pages. Now this is truly magical.

Read more: Butterbeer Ice Cream is coming to local supermarkets around the country

The drummer is definitely the more inked-up Fuentes brother. He simply uses different means of expressing himself than brother and bandmate Vic. Watch the video at 1:14 to see some of Mike’s Harry Potter inspired tats, including the Deathly Hallows symbol on his right palm, a groovy “vato Hedwig” on his right thigh and a portrait of young Harry on his left thigh.

All Time Low talked about Ravenclaw on stage one time…

All Time Low’s Alex Gaskarth talks about those amazing Harry Potter house quizzes (take our quiz now to see which house you belong to!), and he had a few not-so-fond words to say about the Ravenclaw house… (No worries, we still stand with you, Ravenclaws!)

Bout to get on a metal death tube for ten hours! But then I'll be in the land of HARRY POTTER ������

Set It Off may have been touring the U.K., but according to guitarist DeWall, it’s actually the land of Harry Potter, and, TBH, we agree. There’s also this tweet: