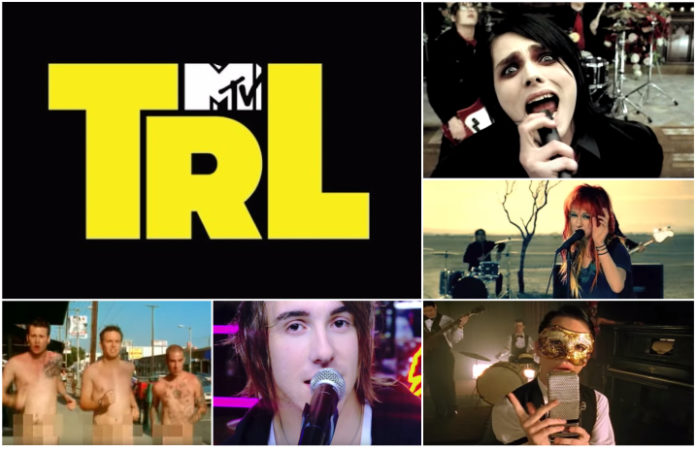 MTV’s Total Request Live premiered in September 1998, and it was peak ’90s from the moment it started, having set off a battle of the boy bands in its music video countdown list. *NSYNC’s “Tearin’ Up My Heart” and Backstreet Boys’ “I’ll Never Break Your Heart” alternated the first and second spots for weeks. However, the contenders were temporarily interrupted as Korn’s “Got The Life” slid into second at one point, proving that listeners weren’t all about pop. TRL’s lists consisted of plenty of alternative acts in their initial 10-year run. Head below for a refresher on some of the bands who rocked the fan-voted countdown, just in time for MTV’s revival of the classic after-school special.

In January 2006, TRL ran the Academy Is…’s “Checkmarks” as part of Pre-RL, a segment spotlighting artists to watch, and the band performed the track in-studio later that same month. They also premiered “Summer Hair = Forever Young” and “About A Girl” on the show in late 2008, but piano ballad “Everything We Had” was the only video to actually be voted on the countdown, debuting at No. 8 and peaking at No. 3 in October 2007.

All Time Low made their way onto TRL in 2008, appearing in the show’s Video Jukebox segment with “Six Feet Under The Stars” in January, premiering “Dear Maria, Count Me In” in February and dropping in the studio to chat in April. Despite only lasting one day, “Poppin’ Champagne” became their countdown debut at No. 10 in August.

AFI made their countdown debut at No. 9 with “Miss Murder” in May 2006, and the track peaked at No. 8 the following month. In September, they made their second contribution to the countdown with “Love Like Winter,” which debuted at No. 7. The band later performed the latter track in Times Square outside of MTV’s studio and, rightfully so, as it landed No. 1 six times in its 40 day-run before being retired from the countdown in December 2006.

“Swing, Swing,” “The Last Song” and “Time Stands Still” from the All-American Rejects 2003 self-titled each made their way onto TRL’s countdown peaking at No. 8, 6 and 9, respectively. Their first single, “Dirty Little Secret,” from 2005 follow-up Move Along was on deck in July 2005 but never snagged a spot in the countdown. Not all was lost, however, as the album’s title track landed No. 1 two weeks after its January 2006 debut, and “It Ends Tonight” peaked at No. 3 in September 2006. The latter became one of TRL’s top three for longest running contenders, lasting nearly four months before falling off the countdown.

Blink-182 had 11 videos land in the countdown between “What’s My Age Again” in June 1999 and “Down” in June 2004. While most of their tracks charted high, “Feeling This” was the only one to hit No. 1, and it did so five times before being retired at the 50-day mark in January 2004. “All The Small Things” and “The Rock Show” were also both retired, each at 65 days in December 1999 and August 2001, respectively. “Always” was the only video to be stuck on deck without ever landing a slot.

Boys Like Girls dominated the TRL charts in 2007, debuting “The Great Escape” at No. 10 in early July and solidifying the No. 1 slot by the end of the month. They played the track for TRL’s audience in August, and it hit the top spot nine times before retiring at 40 days in September. They kept the momentum with “Hero/Heroine” in November, but it debuted at No. 10 and only stuck on the countdown for one day. The following July, the band premiered “Thunder,” and while it never made it on the countdown, they still performed it in-studio the same day Lady Gaga appeared and the Jonas Brothers were co-hosting in a moment that was so 2008, it hurts.

Cobra Starship only landed the No. 9 slot for one day with “The City Is At War” in January 2008, but the band still made several appearances throughout TRL’s final year of programming. Their most notable, however, was during the show’s Prom Week in April where the electro-pop act served as the house band and performed the aforementioned track in tacky formalwear ranging from matching powder blue suits to a hot pink dress.