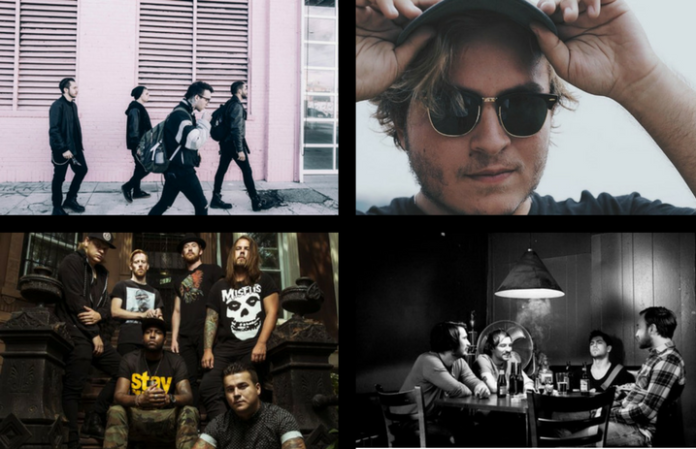 It’s Halloween month (because yes, Halloween does deserve an entire month), and bands have plenty of spooky stories to share, both true and untrue. Whether it’s the legend about a music venue, real-life hauntings or scary accidental happenings, bands can sometimes witness some freaky stuff.

We asked a few bands what their spooky stories were from tours, and here are the responses we got:

TJ Horansky, Sleep On It:

“On our very first tour, we played a venue in Newport, Kentucky, called the Thompson House. It is located directly across the Ohio River from Cincinnati. The venue is basically an old, Southern-style mansion that was converted into a music venue. We were not even allowed to jump or mosh during our set because the ancient floorboards might cave in. Legend states that the house is haunted by ghosts, so much so that the venue actually offers ghost tours.

“The house is named after John Thompson, who invented the ‘Tommy gun’ in 1919. Prior to Mr. Thompson, the house was used as a Civil War-era prison. The field outside is supposedly where the gallows resided. The house was also used as a stop for the Underground Railroad; there have been multiple reports of ghosts wearing war-period clothing roaming the hallways. As soon as we loaded our gear in, we took it upon ourselves to go ghost hunting. We were startled a few times by the creaky floorboards and the hollow groan of wooden beams supporting the house, but no ghosts were sighted, unfortunately. It is still, however, one of the coolest and creepiest places we have ever played.”

“I remember playing at the Armory in Rochester, New York, back in 2009. The Armory is a cool old building that used to be a National Guard Armory. There was an older man who oversaw the building and would always hang out down in the basement. The basement was filled with small jail-cell-looking rooms that would hold weapons behind locked bars. There was also a shooting range full of spent bullet casings. It was generally kind of dirty and dungeon-y looking.

“At the time, we were an opening band on tour, so we played early evenings. So, after the show I decided to go back down and do some more exploring. I went down looking for the old man to make sure it was cool that I was back down there. He wasn’t in the first room where I had talked to him earlier, so I kept going deeper. As I went down the corridor full of jail cells, I would stop and look in each one. This time, the cells didn’t hold weapons anymore, instead they were full of random junk. One was full of costume jewelry from who knows what. Another was full of a bunch of manuals from the 1940s and 1950s on how to properly shoot and operate things like cannons, mortars and other weapons. Some cells were just pitch black. The air was musty and smelled like an old basement.

“I was in one cell going through some of the manuals when I heard the old man shuffling by right outside of the cell. I quickly put the manual down and called out to him to let him know I was down there and looking for him. I walked out of the cell and looked down the hall in both directions. There was no one there.

“I really didn’t think anything of it. I explored for a few more minutes then went back upstairs to the rock show.

“We ended the night like we always did back in 2009: at our merch booth talking to the last of the people that were leaving the venue and working there. We were talking to the promoter of the show that night and he was giving us the low-down on the venue. Apparently the Armory is very haunted and had recently been on one of those ghost hunting TV shows. That was when I remembered my experience in the dungeon, calling out to no one. I got chills. I know I heard someone. That’s why I called out. I wouldn’t have said something if I [hadn’t] thought I heard something. There was definitely someone or something moving down that hallway. But they weren’t there when I looked out seconds later.”

“On my very first tour a year ago, I was in Estes Park, Colorado. I love horror movies, and I’m an even bigger fan of Stephen King novels. I was told about the Stanley Hotel, which is actually where King got his inspiration for The Shining, and where he actually ended up writing the book as well. Nothing crazy spooky, but I went on a guided tour and at one point I swear I felt some cold spots in the room. It was very strange.”

Jameson Teat, Fire From The Gods

“We played the Thompson House in Newport, Kentucky, and the staff was quick to tell us that the venue is one of the most haunted places in the country. It was owned by General Thompson (the creator of the Tommy gun). This place was insanely big! Once we got to our upstairs green room, doors would open and shut by themselves and it always sounded like someone was running up and down our hallway banging on the walls. We asked the staff about it and they told us that the upstairs is haunted by a little boy who would always run around the halls laughing and hitting the walls and doors. At this point we were really freaked out, but being the idiots we are, we wanted to provoke these so-called ‘spirits.’ We were constantly yelling and asking for the boy to make more noise or slam the doors. Occasionally hearing a random bang on the wall, these ghosts really did us dirty by draining the power in our electronics halfway through our first song of the show. This was the most technical difficulties we have ever had during our career.”

“Our first tour was in October of 2014. We opened for the Acacia Strain and the Plot In You; really happy bands, lyrically and all. We were in Jacksonville or Tallahassee, I’m honestly not sure, but it really doesn’t matter. I remember being in the parking lot hanging out for a bit before the show started when we heard what sounded like a car bottoming out. It turned out that a woman had hit a car while on her scooter. Her jaw was really only being held to her skull by her helmet and she kept trying to ask for help but couldn’t.

“Our friend John was there and happened to be an Eagle Scout. He kept her okay until paramedics arrived, so maybe there’s a happy ending and maybe not. We never found out.”

McNae’s spooky story was when Twin Atlantic toured the northern part of Scotland’s Highlands. They were playing at a place called Strathpeffer Pavilion, and there’s a rumor that the Beatles played there at one point. When they were hanging out post-show, McNae felt a wisp of air blow against his ear like someone was trying to get his attention. Then he felt a hand rest on his shoulder, but nobody was there. Ten minutes later, it happened again. He likes to think that maybe it was the ghost of John Lennon letting him know he approved of their gig.

“Recently during the beginning of touring on the Threat To Survival world tour, we had a day off in a normal hotel in middle America. Nothing spooky, average hotel, no rumors of hauntings or history in general. I am a skeptic when it comes to the supernatural and try to be logical when presented a situation that may seem out of the ordinary.

“That being said, this night was different. Typical day off includes a shower, lunch, dinner, Netflix and bed. Truly, we all just try to relax and rest our bones. I went to bed early and crashed hard after a stretch of three shows in a row and long drives with minimal sleep. I'm not one who remembers dreams or even dreams at all most of the time, but this night was different.

“I could feel the breath in my ear, the voice was familiar, but not my family. I couldn't pinpoint it and was hard asleep. Then I felt a warm, loving kiss on my forehead, almost like a mom tucking you into bed, and again, ‘Barry, you need to wake up.’

“I awake startled and out of it, and immediately—as we do these days—I looked at my phone. I had missed two calls and a text from my wife. My phone was in silence mode and there was an emergency back home. Immediately, I call my wife at home and she is shaken up and my daughter is crying and scared in the background.

“Apparently, behind my house on the city fence line, a palm tree (it's Florida, after all) had grown too close to the power lines and the leaves were connecting with the lines and sparking and lighting on fire. Way too close to home and not exactly the thing you want your family to deal with while you’re away on tour.

“However, all turned out fine. The fire department came and were able to remedy the situation and my family was safe. Still, to this day I think something happened to wake me up and at least comfort and check on my family. Call it a guardian angel, spirit or other. Something happened that night and it was 'supernatural' in a positive way.”